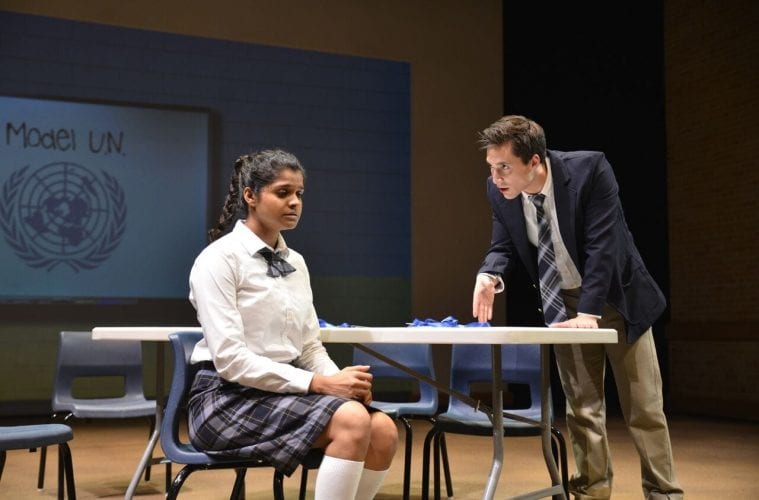 The new play Slur, running at the Alliance Theatre as part of the Youth and Family Series, should give its intended audience of Atlanta students plenty to talk about. That’s partly because of the hefty subject matter but also partly because the show itself was written in collaboration with middle schoolers. The play has a narrative energy and authenticity that could only come from those currently experiencing the issues in the world it depicts.

The play emerged from the classes of seventh- and eighth-grade teachers Greg Changnon and Martha Caldwell at Atlanta’s Paideia School. After development at Paideia and at the Alliance’s summer camps, the show is having its world premiere on the professional stage, now with five adult actors in their 20s performing the roles originally created and performed by 29 middle school students.

The play opens with a slur — the word “jihadist” — found scrawled on the locker of Daisy, a Muslim student at a big, diverse and busy middle school. As Daisy and her friends deal with the consequences of the disturbing act and try to get a sense of who at their school would do such a thing, they face some pretty big questions about identity and community.

It’s heavy stuff, but the show employs a lot of humor, and a real sense of the characters’ world bursts from the stage. The characters must independently deal with outrageous real world pressures at school, but then they have to wait on the sidewalk for their parents to pick them up, or even more humiliatingly, the bus. The internet, Instagram and YouTube always loom menacingly as possibilities for further humiliation or vindication; and individuals rush to declaim their identity as “Goth” or “jock” or whatever, and then bristle against the sides of the tiny box that others want to keep them in.

In a play about identity, it’s especially fun to watch the five actors vault from character to character — this middle school becomes a bustling and interesting place. All of this, of course, could only come from those who’ve lived it, and if the play resonates with its intended audience, it will be in large part because kids will leave with a sense that they’ve been spoken with and not to.

Overall, there’s a sense of storybook gentleness that belies the harsh subject. As it turns out, the slur isn’t even motivated by a desire to harm or insult, but it’s the result of misguided good intentions, and strangely, the act actually has the intended beneficial outcome. Not even the villain is truly malicious, and any suffering is relatively light and temporary: true alienation doesn’t really enter the picture, and this may be more apparent as a fault to middle school audiences than to anyone.

Still, the play approaches its weighty subjects of identity and individuality with a winning combination: a light touch, a sense of deep familiarity with the depicted world and best of all, unguarded honesty about life in the seventh grade.