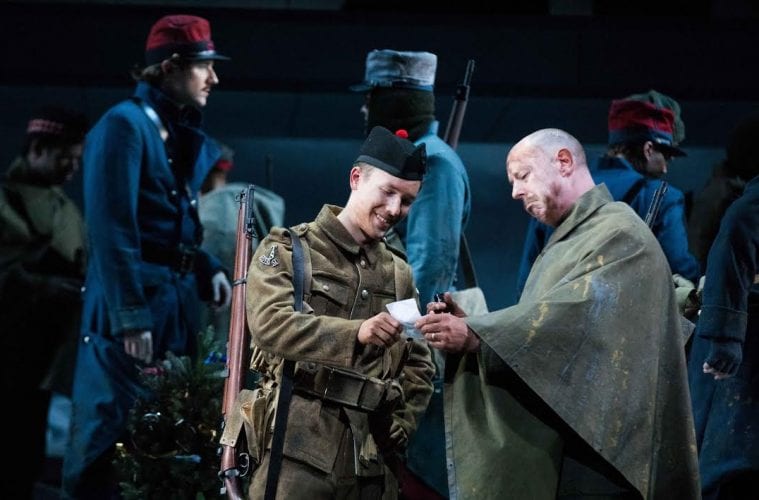 On Saturday evening The Atlanta Opera presented a stirring and ambitious performance of the 2012 Pulitzer Prize-winning opera Silent Night by American composer Kevin Puts. The libretto by Mark Campbell is based on Christian Carion’s screenplay for the 2005 film Joyeux Noël. The story is a fictionalized account of the spontaneous 1914 Christmas truce between Scottish, French and German combatants in World War I.

The opera is sung in English, French and German, plus a smattering of Italian and Latin, with English supertitles. Saturday’s performance took place at the Cobb Energy Performing Arts Centre. Three more performances remain: tonight (Tuesday) and Friday evening, and Sunday afternoon.

Three subplots and their characters are introduced in the prologue, the beginning of the war. At the Berlin Opera, a performance by singers (and lovers) Nikolaus Sprink (tenor David Blalock) and Anna Sørensen (soprano Ava Pine) is interrupted by an announcement of declaration of war. Sprink is called into military service.

At a small church in Scotland, William Dale (bass-baritone Andrew Pardini), dreaming of heroism, talks his younger brother Jonathan (tenor Alexander Sprague) into enlisting with him, in the presence of the parish priest, Father Palmer (baritone Troy Cook), who becomes a chaplain in their unit. In Paris, the departure for war of Lieutenant Audebert (baritone Matthew Worth) angers his young wife Madeleine (soprano Bryn Holdsworth), who is pregnant with their first child. 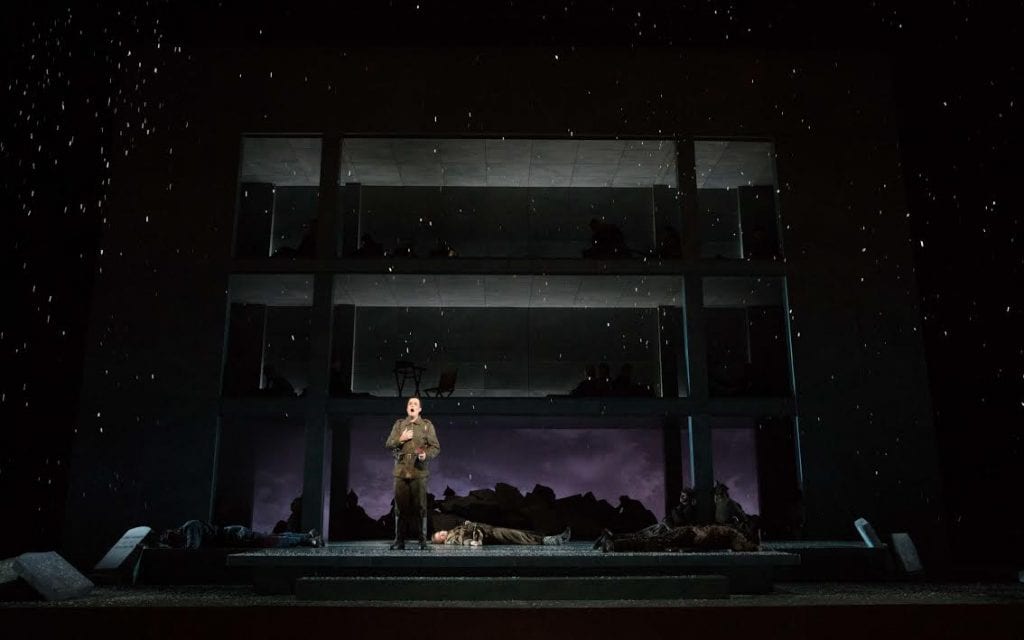 Silent Night uses a massive stage that features 33 members of the chorus as soldiers.

The massive upstage structure of the unadorned, stark gray set is in three tiers, revealing the soldiers of each nation — Scots on top, French in the middle, and Germans on bottom — portrayed by chorus master Walter Huff’s 33-strong male chorus. Their national songs chaotically collide with each other in readiness for war, suddenly interrupted by greater chaos with a hair-raising portrayal of battle with explosions, gunfire and hand-to-hand combat filling the stage. In no uncertain terms the story’s horrific context is set for the audience, in the most unsentimental manner.

Sprink despairs of war and having killed a man. William is fatally shot, and Jonathan is obliged to leave his older brother to die in the No-Man’s Land between the opposing entrenchments. Jonathan vows vengeance for his brother’s death. On a happier note, we are introduced to Audebert’s aide-de-camp, Ponchel (baritone Andrew Wilkowske), whose life is saved when an alarm clock he always carries next to his heart deflected a bullet.

On the next day, Christmas Eve, Sprink is called to sing for the Kronprinz (tenor Brent Reilly Turner), the last crowned prince of the German Empire, at a nearby chalet. Anna is also there to sing. She goes back to the German encampment with Sprink. The Germans hear the Scots sing an old ballad about home. Sprink responds loudly with a German carol while holding up a Christmas tree and the ground is laid for a truce by the lieutenants in charge — Audebert of France, Horstmayer of Germany (baritone Craig Irvin) and Gordon of Scotland (baritone Alexander Hajek) — and a camaraderie develops between them. 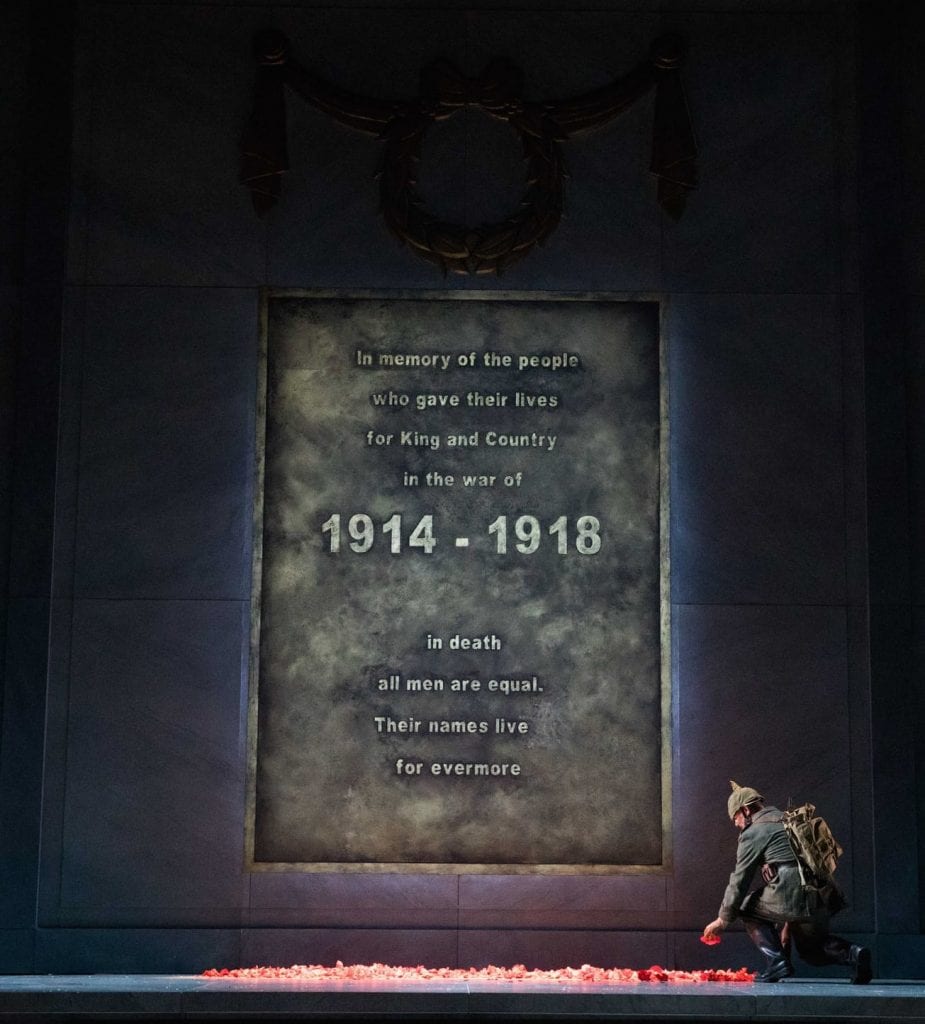 Puts’ score uses dissonance and consonance as metaphors for war and peace. His necessarily eclectic music ranges from the warmly luscious, to the emotionally churning, to movingly simple at pivotal moments where it hangs poignantly in air — as in the Dona nobis pacem, sung by Anna, which concludes the makeshift celebration of Mass at the end of Act I.

Guest conductor Nicole Paiement works wonders at the helm of the orchestra. The Atlanta Opera’s artistic director, Tomer Zvulun, is the production director for Silent Night, and his creative team does a bang-up job. Zvulun brings his own firsthand experience of war to the production table: at age 18, he began serving as a medic in an Israeli combat infantry unit for three years.

As the opera nears its close, the military high commands restore official order, represented by the Kronprinz, a British major (bass-baritone Alan Higgs) and a French general (baritone Tom Fox), who we learn is Audebert’s father.

Alas, in the process, Jonathan must have his revenge. When the British major orders the Scotsmen to shoot a German soldier crossing No-Man’s Land, it is only Jonathan who willingly fires a fatal shot. An alarm clock rings. It is Ponchel, who had visited his mother behind occupied lines, disguised as a German soldier. Before he dies, Ponchel gives the news that Audebert has a new son named Henri. Audebert and his father vow to make it through the war for his son’s sake.

The Scottish soldiers are sent to the front lines; the French to Verdun, which would later become the site of one of the largest, longest battles of the war. The Germans are packed off to the Russian front in Pomerania and as they go, they hum a Scottish ballad they learned about home. We are left with a battlefield that lies empty, yet a war that goes on.