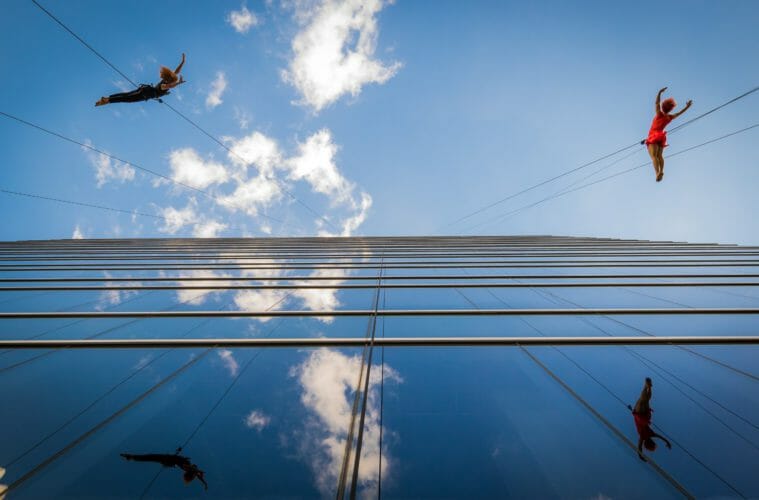 Preview: BANDALOOP to defy gravity dancing on facade of building on BeltLine

In partnership with Flux Projects, BANDALOOP will bring its unique and breathtaking fusion of rock climbing and contemporary dance to the Atlanta BeltLine October 1-3. The Seattle Times has described BANDALOOP’s work as what dance might “look like if it were freed from the constraints of gravity.” The intergenerational ensemble of dancers, some of whom have been with the company since its founding, uses climbing ropes and harnesses to perform suspended in mid-air, usually on the side of a multistory building.

Now celebrating its 30th season, the company will transform the BeltLine-facing side of 725 Ponce de Leon Avenue (near Ponce City Market) into a vertical stage for the world premiere of “FIELD,” which features spoken word and live music in addition to the troupe’s signature acrobatics. Shows will begin daily at 5 p.m., with live music starting at 4:30 p.m. Admission is free and run time is approximately 35 minutes.

The company has a dedicated following among artists and fans. It is the exclusive “artist of record” for choreographer Trisha Brown’s iconic “Man Walking Down the Side of a Building” and gets millions of views on YouTube with its “Waltz on the Walls of City Hall.” BANDALOOP was last in Atlanta for the start of what was supposed to be a two-year residency at Georgia Tech in 2018. The residency was cut short, however, and the company was unable to present work planned for 2020.

Speaking with Floyd Hall, brand manager for Flux Projects, during a recent webinar conversation, BANDALOOP artistic director Melecio Estrella said he was looking forward to returning to Atlanta. He wants the ensemble’s work to not just invoke awe for its physical daring, but to carry a message: In “FIELD,” the six dancers, theater artist Chibueze Crouch and performer/composer Ben Juodvalkis explore how the clothing and fashion industry contributes to climate change and environmental degradation while simultaneously considering humanity’s rich history of textile making and the fiber arts. Nigerian-born “textile culture bearer and fashion designer” IB Bayo created the costumes and large fabric set pieces for the show.” 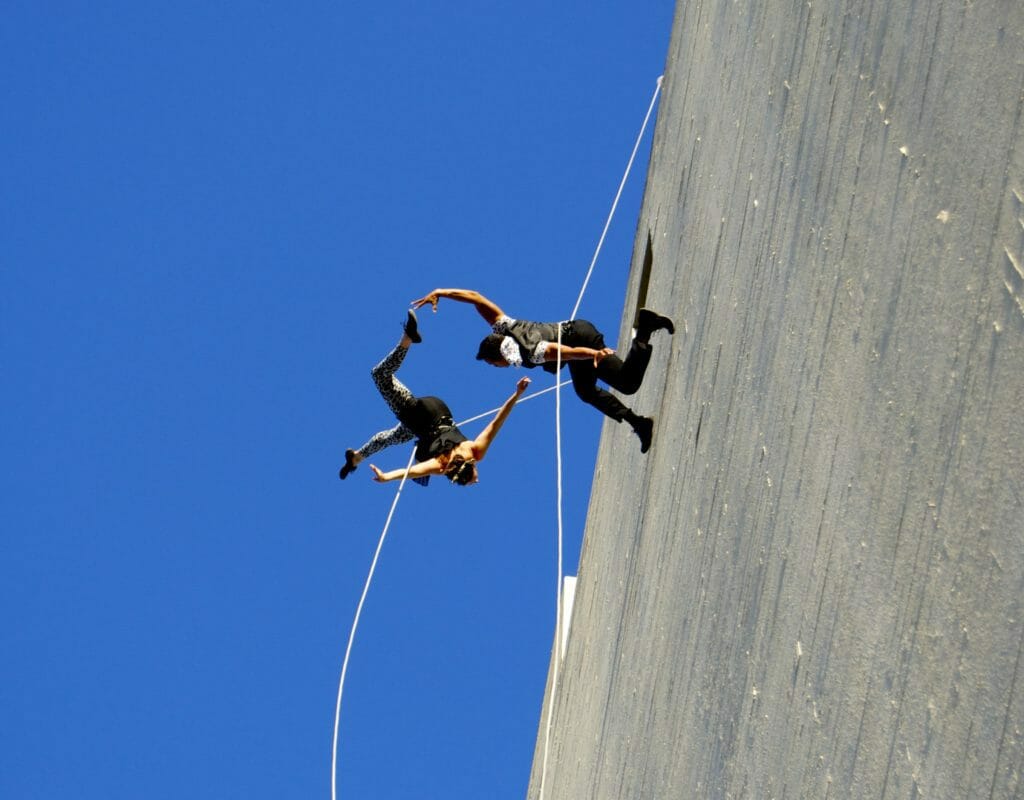 BANDALOOP performs on the facade of a building in Oakland, California. (Photo by Krystal Harfert)

“FIELD” is the second installment in LOOM, “a multi-year initiative of programming centered on the social, ecological, and spiritual impacts of fabric.” “FLOOD,” the first work in the series, examines the flowing, water-like textures and shapes of fiber and fabric, as well as the impact of the textiles industry on the world’s water supply and aquatic ecosystems. For both works, BANDALOOP collaborated with international experts in fiber arts, textiles and environmental sustainability.

Speaking to Hall during another Flux webinar, one of those experts, sustainability strategist Catherine Botrill, described watching BANDALOOP perform as “electric” and “magical.” She hopes “FIELD” will inspire people to consider how the relationship between people and the fibers and fabrics they use could shift from one of resource extraction and waste to one of preservation and conservation.

Audience members are encouraged to bring outdoor blankets and lawn chairs, and to arrive early to set up on the green space between 725 Ponce de Leon Avenue and Ponce City Market. People will have to look up to see the show, and the most comfortable way to do that, and get the full “wow” experience, is from a reclining position. If you’re interested in BANDALOOP’s mix of art and activism sign up on the Flux Projects website to volunteer on one or all three days.