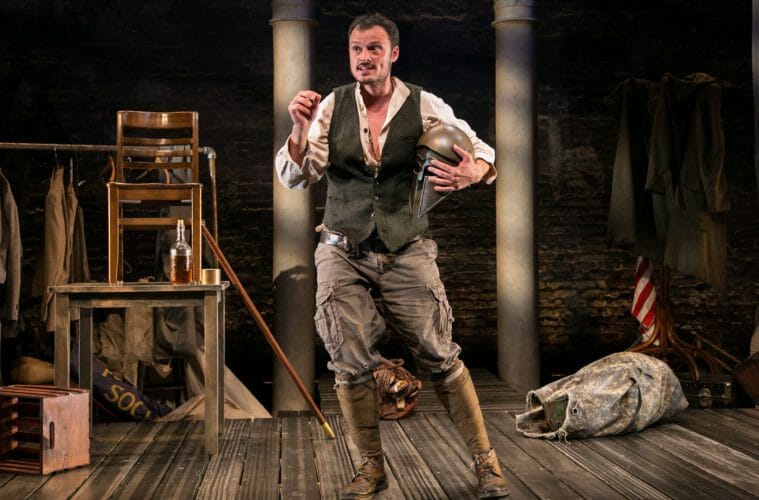 Lee Osorio plays The Poet in "An Iliad," an updating of the Homer classic, at Theatrical Outfit. (Photos by Casey Gardner Ford)

Review: Theatrical Outfit’s “An Iliad” a potent statement on the tragedy of war

The famed film director François Truffaut said that it was impossible to make an anti-war film because every feature depicting war makes explosions and battle fun to watch, that the storytellers inevitably give the audience a kind of hero.

An Iliad, running through October 10 at Theatrical Outfit, tackles the noble challenge of creating an anti-war performance headfirst. Taking Homer’s war story that has enthralled audiences for thousands of years, before the written word, this adaptation by Lisa Peterson and Denis O’Hare adds touches that provide humanity, perspective and rich emotion to the tale by stripping it of its population and scope. One performer tells the story of the Achilles, Hector and the Trojan War. 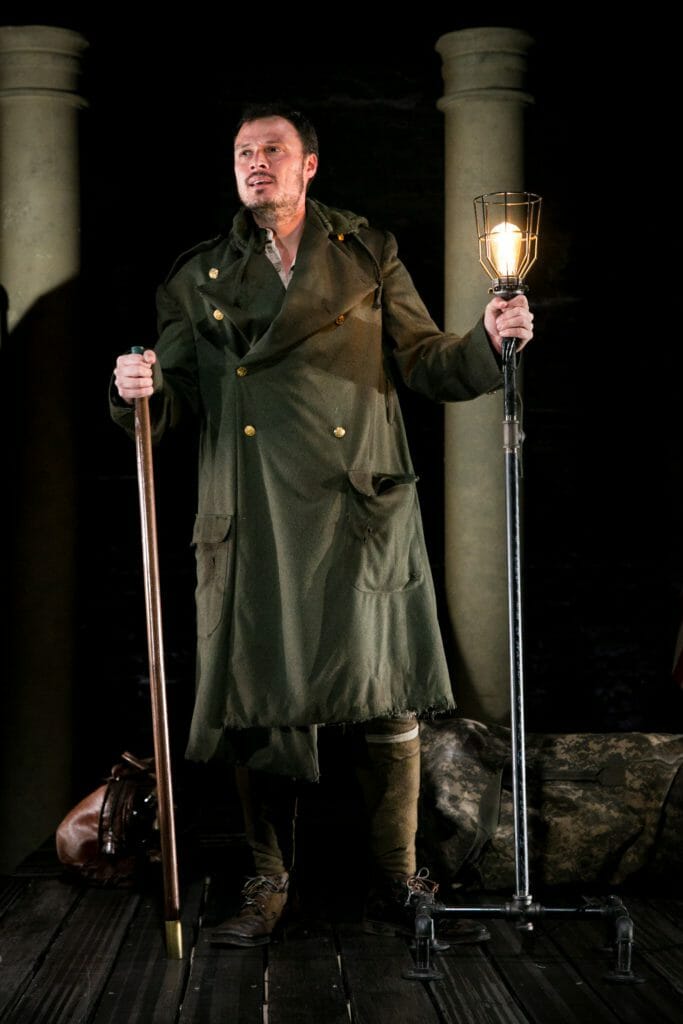 Lee Osorio portrays The Poet, a character who confesses to the audience that he only tells this story in the hope that he’ll one day be able to stop telling it. To perform this kind of role, an actor must convey authority, knowledge and power to the audience immediately upon taking the stage. Osorio does that, emerging swaddled in layers of costume to stand next to the ghost light in the center of the set. He is weary yet strong, unshaven yet handsome, as he reveals himself.

The costume from Alan Yeong begins as a mountain of outerwear, as though The Poet is the same poet who has told this story from the beginning of all war. He carries a massive rucksack. He has traveled far, seen much, and he stands apart from all time. Osorio peels away layers of clothing throughout the show, relative to how much the character seeks to connect with the audience.

For this play to work, the character must work, for The Poet is the primary point of focus. The set is not bare. Designed by Lizz Horvath, it also evokes a pile of ruins that has accumulated over human history. But, as the story progresses, the stage’s props (by Nick Battaglia) begin to take on different purposes. What looks like a fortified wall is dismantled into the tables and chairs of which it’s comprised, as the story needs them.

Matt Torney, who became Theatrical Outfit’s artistic director in July 2020, stages his first live production for the company with An Iliad, the first show presented in front of an audience at the theater in 18 months. The pandemic may be the reason An Iliad was chosen, as Osorio and cellist Deisha Oliver are the only performers who take the stage, with Oliver masked and at a distance. But the play is a solid work with very interesting staging. The show frequently feels much bigger than it actually is.

Osorio’s last solo acting performance was Out of Hand’s 2019 production of Conceal and Carry — a journalist’s personal monologue about gun violence that was staged in people’s living rooms. An Iliad is a beast of a performance by comparison, nearly two hours, bombastic in feeling, funnier at times and sometimes even bloodthirsty. 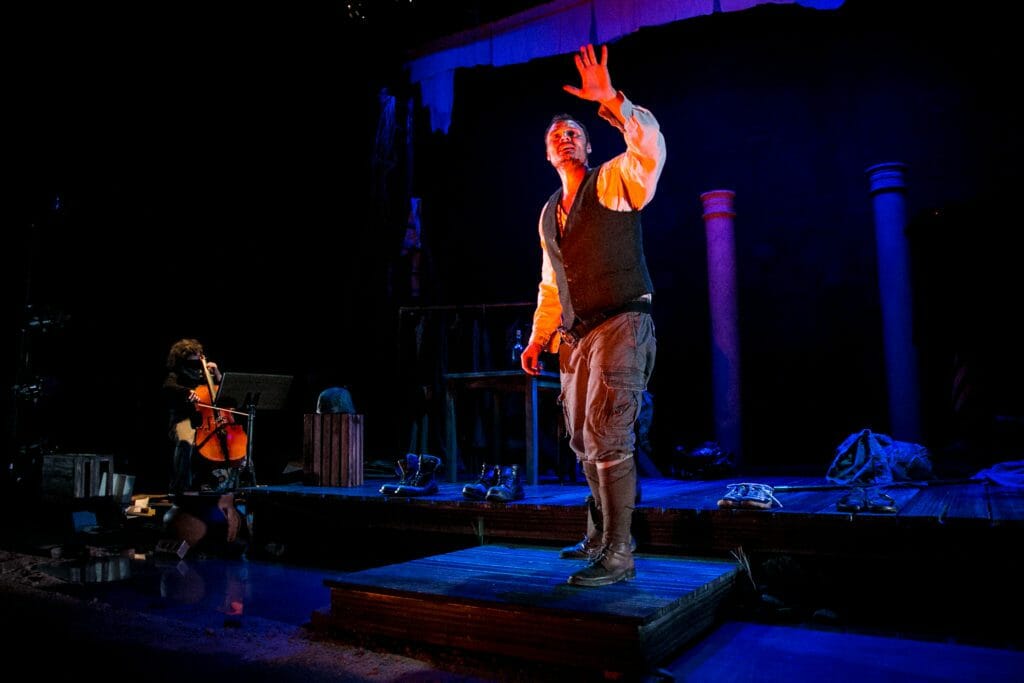 Osorio and cellist Deisha Oliver are the only performers in “An Iliad,” Theatrical Outfit’s first show staged before an audience at the downtown theater in 18 months.

His story occasionally punctuated by pulsing cello music, The Poet goes from being the audience’s confidante to its historian, from foot soldier to warrior to its angry god. Yet the character’s motivation is always singular.

He wants to tell us that war isn’t majestic. Everyday people fill the shoes that march on the battlefield. He tells us the fallen bodies could’ve come from anywhere, be it Greece or Gaul or Ohio or North Dakota. As he shares this, he empties a bag of soldiers’ shoes, lining up the pairs. It’s an effective image.

When he  narrates the tale of Achilles’ great friend Patroclus taking up armor and charging against the Trojans, Osorio transforms Patroclus from a meek, amiable sidekick to someone committing massacre on a battlefield, wielding the might of a god. The stage lights around him reflect this, casting his shadow large against the screens behind him. And when the Greek soldier is brought down, the actor’s vulnerability conveys what it was like for Patroclus to be reminded that he was merely mortal. The tale of tragedy works.

Another surprise of the script is that it eschews some beats from the original Homerian epic. Gone are the gift horse and the heel. But, in their place, we get one storyteller trying to show us how much of our humanity is lost when we go to war.

The highlight of Osorio’s performance is when he lists all the wars that have occurred since the Trojan War from memory. The script makes this more than just a litany, ending with Kabul, Afghanistan. With each new fight, The Poet becomes more defeated, and the audience gets the unfortunate sense that the violence we inflict upon each other will never end. It is a tragedy that belongs to all of us.