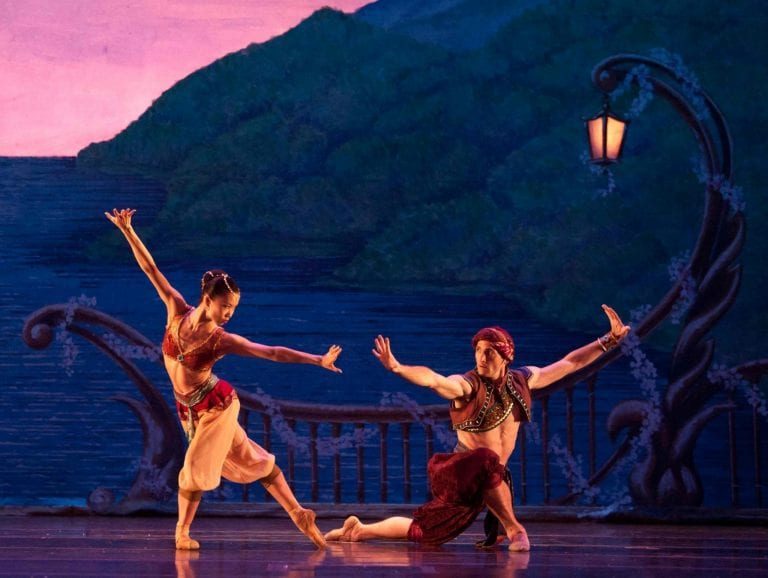 Tara Lee will reprise her role as the Arabian dancer in this year's Atlanta Ballet's Nutcracker. (Photos by Charlie McCullers)

Friday night’s opening of the annual run of Atlanta Ballet’s Nutcracker at the Fox Theatre will mark the 21st, and final, season under the direction of artistic director John McFall.

McFall, who will retire at the end of the upcoming season, is only the third artistic director in the ballet’s 86-year history and he goes out on top of his game. Over the past several years, he has brought the company into what many long-time observers see as a “golden age.” In that time, Atlanta Ballet has debuted new works by Twyla Tharp, resident choreographer Helen Pickett and many cutting-edge choreographers.

ArtsATL recently sat down with John Welker and Tara Lee, the two company dancers who have been with McFall the longest — Welker is beginning his 21st year; Lee, her 20th season. They discussed how they found out about McFall’s retirement, his impact on their careers and the company’s resolve to make this season a gift to him.

They also discuss the challenges of Atlanta Ballet’s Nutcracker, which is choreographed by McFall and runs through December 27.

ArtsATL: What are your feelings going into John McFall’s final season?

Tara Lee: It’s bittersweet. I don’t think it’s completely sunk in yet. We’re down to business in the studio, so a lot of it feels normal with this overlying different story that’s happening. We’re more and more grateful for what we’ve experienced. It’s a gift.

John Welker: A lot of us have grown up together, particularly with this production of The Nutcracker. We all came pretty young into this company.

Lee: We were the two youngest members of the company when we got here.

Welker: You earn your stripes with this production of The Nutcracker. It’s recurring; you can count on it every year. You can use it as a gauge for where you are and how far you’ve come in your technique and your artistry. Every time you revisit it, you can say, “Oh, this is a little easier for me” or “I’m getting better” or [laughs] “This really needs some work.”

Lee: No matter how many years we’ve been doing the production, it’s still difficult. You never just have it in your back pocket. It’s still technically challenging. It still keeps you alert and awake.

ArtsATL: Any new twists this year?

Welker: No new twists, and I think that’s so appropriate for John’s last year. It is what it is, and there’s something comforting in having that tradition.

ArtsATL: How did each of you meet John McFall?

Lee: I was in New York with Joffrey II. When I was at that age, there’s a certain naiveté; you’re almost too inexperienced to be nervous. With John, I was very aware that he was there and watching class and that he was an important person, and that I should definitely be at my best. He has that sense of commanding the room even if he’s not directing a class or rehearsal.

He offered me a contract and at that time, I didn’t know what I was going to do. I had one phone conversation with him that was the deciding factor. Everything just aligned and it felt like, okay, we’re now artistic friends and partners. Something happened in that conversation where I said, yes, I want to come down, I want to dance for you.

The first year, he was so energetic and so on fire about what he wanted to do with the company. There was a sense of new excitement that year. And as I got to know him, I got more nervous because I realized: oh my gosh, he’s a big deal [laughs]. He knows what he wants and he’s serious. You realize you’re in the big leagues and you have to step up.

Welker: I was scared of him. I was 11 when we met. I knew John from my sister, who danced at BalletMet [in Columbus, Ohio], where he was the director at the time. I heard a lot of stories from my sister. Back then, he had a lot more fire. He was more brash and outspoken. There was a lot of energy with him. He expected you to be on it. He still is that way, but there’s a smoothness to that now, there’s a maturity.

Lee: I’d get scared every time he walked into the studio. He was intimidating.

Welker: When I was a kid, I didn’t have my attention span with me a lot of times. So I gave him a lot of reasons to yell at me. I was definitely intimidated in the studio. I’ve come a long way since then, to say the least. As Tara said, you notice his presence the second he steps into the room. It didn’t take me too long to get past the scared part. He was a friend of my family, and still is. So there’s also a personal relationship there as well, which makes this all that more bittersweet.

ArtsATL: What kind of impact has he had on your approaches to dance?

Welker: He lets you be yourself. I can’t stress that enough. When you discover yourself and who you are and who you want to be, it’s empowering. He lets you do that. He’s not asking you to be someone you’re not, and that’s the very reason he hired me in the first place. He told me, “I want you to be you, that’s why I’m hiring you.” In this business, you don’t get that. You just don’t. There’s a privilege there; you realize that this place is different.

Lee: I agree completely. You can really do some cool things artistically that you don’t have the luxury of doing in a lot of places that do want you to be a certain way and fit into the same mold. He would be so bored with a group of dancers who did that. Authentically bored. He wants to see what you’ve got to bring to the table that’s different. That’s my favorite thing about the company.

Welker: That’s a strong suit of his. There’s not a lot of distance between him and his dancers. He wants to know the dancers, for all the good reasons. And that just makes you want to do your best.

ArtsATL: McFall seems to deliberately foster an atmosphere where it’s a company that looks at the whole, as opposed to a group of individuals jostling for position.

Welker: That’s true. That’s definitely not something that just happens, you have to really foster that. He really thought well about it. When he brings in a new dancer, he knows what a tentative balance the company is. One persons could ruin that atmosphere. He’s very conscious of that.

ArtsATL: How did you find out this was going to be his last season?

Welker: It was rough.

Lee: It was about three weeks into rehearsals for the season.

Welker: It was just a weird day altogether. They announced a company meeting. John was coming in and Allen Nelson, the chairman of our board, was coming in. Allen couldn’t make it; he had to go into the hospital. John McFall pulled me out of rehearsal and said, “Here’s Allen Nelson on the phone, and he needs to talk to you.”

And Allen said, “I’m about to send you an email that I want you to read to the dancers on my behalf.” So I had to read this note that Allen sent; I had to directly tell the dancers.

Lee: Oh, my gosh, it was so emotional. I wanted to start crying. And John said a few words after that.

Welker: John had known for some time, and he seemed to be in such a peaceful place. For us, it was such a gut, emotional reaction. But John put everything into perspective with clarity and with a calmness and reassurance that let us know, “Everything’s going to be just fine.”

Lee: And he was so concerned with everyone’s state of mind. He didn’t want us to have our work disrupted. He said, “Now don’t let this distract you from what you need to be doing in the studio every day. We’re still here, and we’re still doing work.”

ArtsATL: A lot of longtime observers of Atlanta Ballet have described the past four or five years as a “golden age” for the company. Do the dancers have that same sense?

You can almost compare it to a human being who comes to a place in their life where they know who they are, and they’re at peace with it and it works. You really own your identity. I think that’s what’s happened with the company. It took all those years to really come into that feeling.

Welker: There’s been a bit of a shift in our mental attitude, in how we see ourselves and how we see this company and how we see it standing in the larger ballet world. We feel our standing has definitely increased. In fact, there’s a responsibility to keep it going.

ArtsATL: Have the dancers gotten together with the purpose of sending him out on a high note?

Welker: There is a sense of a special moment this year, and I hope the audiences feel the same. What they enjoy and what they come to see is a direct result of John’s leadership. We want this season to be a parting gift to him.

Lee: Absolutely. There’s even more of a synergy between everyone because of this amazing feeling we have. It’s impermanent — this golden age — and we know how fragile it is. It’s fleeting. But the things that are beautiful about this place don’t have to be fleeting.

This season is a dedication, thanking him for giving us this life here. And, you know, we’ll throw parties, too [laughs].