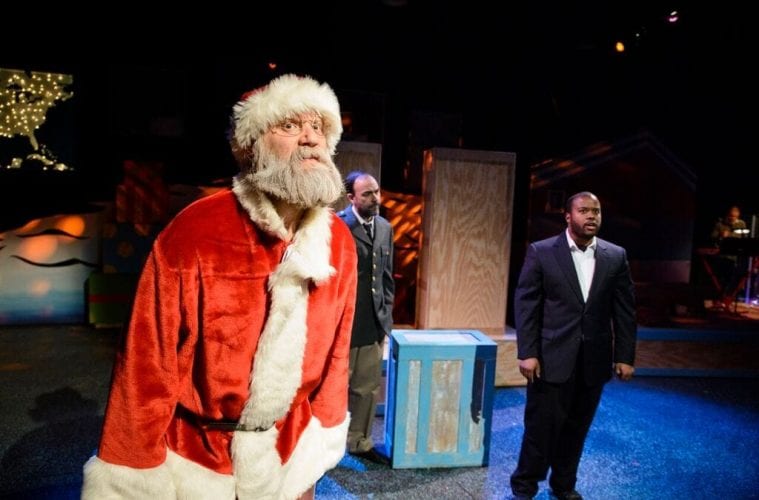 Yes, Virginia, Santa Claus is a terrorist (at least in the alternate world created by Dad’s Garage). (Photos by Greg Mooney)

It’s a collaboration that seems highly improbable — the rebellious comics of Dad’s Garage mixing it up with the highbrow folks of the Alliance Theatre for a holiday gig.

Yet for the second consecutive season the two troupes are doing just that, with the world premiere of Merry %#!*ing Christmas in the smaller Jennings Hertz Stage (through December 19) and the Alliance’s annual A Christmas Carol upstairs (through December 27). It’s a bit surprising which one proves to be more entertaining.

As written by Kevin Gillese (Dad’s artistic director) and Arlen Konopaki, Merry %#!*ing Christmas isn’t a warm, cuddly Christmas show for the entire family. Its tongue is planted firmly in cheek and the profanities are plentiful. The comedy combines three stories that eventually merge into one. During the holidays, Adorable Orphan (Karen Cassady) is sad that she has no one around her and is overjoyed to find a friend in the genderless snowperson Frosty (Taylor M. Dooley) that she builds.

Not realizing (at first) that he has been accidentally misplaced into the current day, a confused Ebenezer Scrooge (Chris Blair) teams up with despondent Jerry (Mark Kendall), who is contemplating suicide after the breakup of his family. Finally, there’s Santa Claus (Chris Rittelmeyer), who is at the North Pole plotting the end of the world. He is a terrorist — prone to distributing guns — who is bitter at the passing of Mrs. Claus.

A plane crash ultimately brings all of the characters together.

As directed by Gillese, this production has a cast who run through this with glee, including Assistant Director and Narrator Ed Morgan and Accompanist/Music Improviser/Narrator James Watson. The longing Frosty has for a gender is fodder for some of the funniest moments of the night and the interplay between Dooley and Cassady is wonderful. Their sequence could easily be fleshed out to a longer version.

Merry %#!*ing Christmas is kitchen sink variety theater — throw enough jokes out and some will stick. Those that do include gags about Nickelback and Donatella Versace. It’s a goofy ride, cleaning up enough for the confines of the Alliance yet retaining its edge for the most part. It could be better, with more character development and clarity, but overall it’s pretty easy to digest. And if you’ve ever longed to hear the phrase “punk ass bitch” in the Woodruff Arts Center, here’s your chance.

Now in its 26th year, A Christmas Carol is headlined by David De Vries, who made his debut last year as Ebenezer Scrooge after long-time Scrooge Chris Kayser took a break. It’s the familiar tale of how the grumpy one learns to appreciate what he has, after some specters come to haunt him one Christmas Eve.

David H. Bell’s version of the classic is high on political correctness and musicality, with the cast breaking out often into lovely holiday numbers. And that cast is often like a Who’s Who of Atlanta area talent. After retiring from a 16-year run as Scrooge, Chris Kayser returns as Jacob Marley.

Much of director Rosemary Newcott’s ensemble is the same from previous years. Bart Hansard plays Fezziwig and the Ghost of Christmas Present while Elizabeth Diane Wells is the Ghost of Christmas Past. Others in the all-local cast who’ve returned are Je Nie Fleming as Mrs. Fezziwig and housekeeper Ms. Dilber; Thomas Neal Antwon Ghant as Bob Cratchit; and Jaden Robinson as the cutest Tiny Tim possible.

Kayser is back this year too, playing Jacob Marley. All are fine, capable performers who never phone in their work, with Fleming a particular standout, full of charisma and a majestic voice that suits this kind of material.

In the central role, De Vries has settled more into Scrooge this year but he just doesn’t have the passion yet of Kayser, or the trajectory. It’s unfair, perhaps, to compare actors, but Kayser’s wonderful performance was the glue that held this production together for so many years. Without him the show is emptier, with less emotion.

The set, by D. Martyn Bookwalter, is as lavish and impressive as ever. There’s no denying that Carol is gorgeously staged, beautifully sung with nifty special effects, with fog rolling off the stage onto appreciative younger patrons. Yet after so many years — and without Kayser at the heart — it can feel lifeless.

No local show seems more in need of a makeover or some fresh energy than this one. Granted, there aren’t an abundance of dimensions to give to Carol, but with the exception of the ensemble, this is virtually the exact same show from 2014. Heck, from 2004.

It’s perfect fare for anyone who’s never seen a production of Carol but others might be more enthralled by Dad’s work which, even in its ragged, early-form staging, has a lot more vitality and freshness.