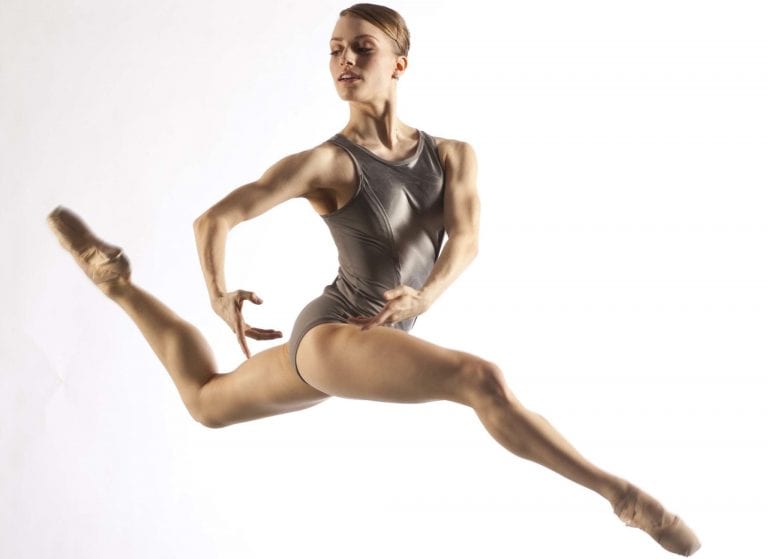 Nash is in her fourth season with Atlanta Ballet. (Photo by Charlie McCullers)

Preview: Atlanta Ballet’s Jackie Nash steps out of the MAYhem and into a “Classical Symphony”

For weeks over the winter, Jackie Nash watched her boyfriend, Heath Gill, immerse himself in the lead role in the Atlanta Ballet world premiere of Camino Real, which beautifully translated a Tennessee Williams play to dance. Gill played Kilroy, a former Golden Gloves boxing champion sent to a purgatory as imagined by Williams.

Now, the tables are turned as Nash prepares to dance in her first lead role in Classical Symphony, part of the ballet’s season-ending MAYhem program that runs May 15-17 at the Cobb Energy Performing Arts Centre.

The couple met in their first year in Atlanta when they danced a duet for a summer class recital; they began to date the following year. Nash is using her experience watching Gill prepare for Kilroy to inform her on how to prepare for her first lead role.

“I can’t tell you how many times he read the play and he always had the music on,” she says. “He has to be really focused, and I really respect that. I’m trying not to let the whole experience be too much. I’m just trying to take it a step at a time.”

Classical Symphony was conceived by Yuri Possokhov, a former Bolshoi dancer and San Francisco Ballet resident choreographer, and is intended as a celebration of ballet. The New York Times described it as an “exhilarating and bold display of full-throttle academic pure dance with modern accentuations.”

For Nash, the piece is not only her first starring role for Atlanta Ballet, but a physically demanding challenge as a dancer. It was first performed by Maria Kochetkova of the San Francisco Ballet.

“She has all that Russian technique and the flexibility and the body; it’s a pretty big role to fill,” says Nash. “But I love the piece. It’s tough, and Yuri admits it.”

Nash refers to a recent video interview Possokhov gave where he discusses the difficulty of Classical Symphony, then laughs as she perfectly mimics his Russian accent: “I don’t think dancers like me so much for this piece; they’re kind of cursing me under their breath.”

She’s very aware that this is her first main cast principal role (there are often two, and sometimes even three, casts for each production). “That was the shocking part,” she says. “I was always in the second cast, and I got to watch someone else learning it and experiencing it. That was my thing up until now. Then it’s like, ‘Your chance: go! Deep end of the pool!’”

The stage at the Cobb Energy Centre is a long way from Nash’s first dance floor in the parish hall of a local church in Trumbull, Connecticut, where she took dance lessons at the age of four. Her first role was in Legend of the Bluebonnets, a Native American-themed piece. “I was a bluebonnet, and I had this big flower on my head,” Nash says, laughing. “My mom helped make the costume. My parents always supported me, and that was great.”

As Nash began to take dance more seriously, she graduated to the Connecticut Dance School, where she was encouraged to take summer dance classes all over the East Coast. “They would always move me up a level to be with older kids, so that’s when I thought, ‘Okay, maybe I’m not as horrible at this as I might think sometimes,’” she says.

Nash was in high school when she firmly decided to dance professionally. “In elementary school for career day, I’d always say I wanted to be a ballet dancer,” she says. “But I really committed to it in high school.”

At the age of 15, Nash moved by herself to Philadelphia to attend the Rock School for Dance Education. “I knew I wanted to go someplace that would get me a job,” she says. “That’s when it got really, really real.”

It was there that Nash came under the influence of former Atlanta Ballet principal dancer Maiqui Manosa, who is a guest instructor. Later, Manosa scolded her when she learned that Nash was going to audition for an Atlanta Ballet summer intensive program. “Seriously, you want to go to Atlanta and you didn’t tell me?” Manosa said to her.

Manosa called friends in Atlanta and told them she had a promising young student. And when Nash got here, she was invited to the class attended by the company dancers and was hired as an apprentice dancer.

Nash vividly remembers her first day in Atlanta. She carefully looked for an empty barre spot to stretch, so she wouldn’t take someone else’s space, and noticed one of the dancers — Alessa Rogers — looking at her. “Alessa still gives me crap about this,” Nash says. “She’d just gotten injured and she was sitting in the front row. She told me later that the spot I took was her spot. She said, great; I get injured and they replace me the next day with this new girl.”

Nash’s laugh as she finishes the story is deep and infectious. Rogers and Nash are now good friends, and were together on the day two years later when Nash learned she’d been promoted into the company.

Nash found her new contract in her mailbox and it described her as a “company artist.” Nash wasn’t sure whether that meant what she thought it meant. “Alessa was in the dressing room and she confirmed that it meant I was in the company,” Nash says. “And we just started screaming.”

Typically, new dancers for Atlanta Ballet fill in the blanks in ensemble roles, and sometimes understudy principal roles in the B or C casts. For the first few years, they mainly watch and practice and learn, and Nash was no exception. She, for example, had very little training in contemporary ballet when she arrived in Atlanta.

“When you come in, you’re not ready to do big roles yet,” Nash says. “You think you know stuff, and you just don’t. By watching people and having your time to acclimate yourself and learn and absorb, you’re much better for it. There’s something important about that learning curve.”

Now in her fourth year with the company, the 23-year-old Nash has stepped forward this season. She played Marya in the principal cast of this year’s Atlanta Ballet’s Nutcracker. Marya was actually her first role for the company.

“I was the last cast, cast D-2” Nash says laughing. “Not even D-1, D-2. I was so excited and so nervous. I remember being in the “dungeon” studio at the old building in Midtown. It was downstairs and had no windows and a pillar in the middle of the floor. We were rehearsing the party scene and my face was red from not breathing for my first entrance.”

Nash will be featured with Rogers in Classical Symphony, along with another young dancer who has stepped out this season — Yoomi Kim. Nash and Kim had small, but memorable roles in Camino Real — created by resident choreographer Helen Pickett — as two socialites. Pickett told them to channel their inner Paris Hilton and Nicole Richie for the roles.

“I think of myself as a bit of a comedian,” Nash says. “Working with Helen, she has such an exaggerated personality and she has such a great sense of humor. It was no holds barred; I could go for it and I loved it. Yoomi is so funny, and she’s quick. I could do new things, and she wouldn’t freak out. She’d just go with me. It was like being in an old-timey comedy show.”

In the Williams play, her character has lost her little arm dog. Nash was so immersed in the role that she would walk around the studio, in character, asking her fellow dancers if anyone had seen her dog.

That experience, and her role as Marya, has helped prepare Nash for her role this weekend. She’s learned she has the innate ability to embrace the spotlight.

“It’s magical, it really is,” Nash says. “The first time you come out as Marya, you’re going to the party. You come down the stairs — which is actually a little bit stressful because you don’t want to fall — and you do this little twirl and you look out at the entire audience at the Fox Theatre. You can’t beat it, you know?”