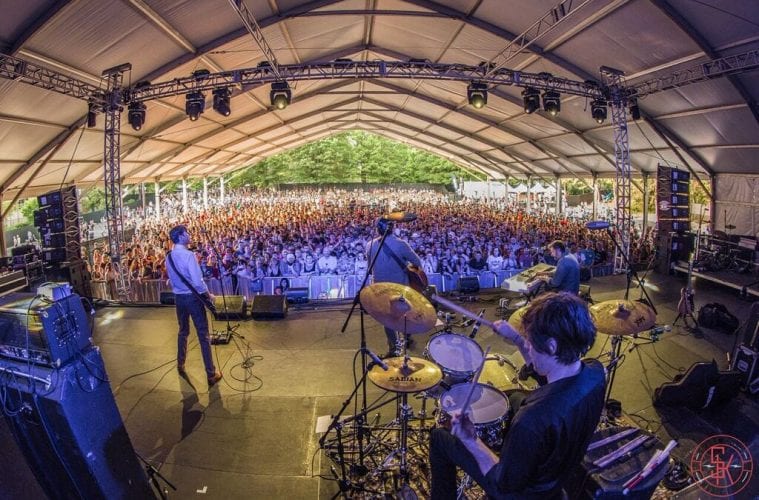 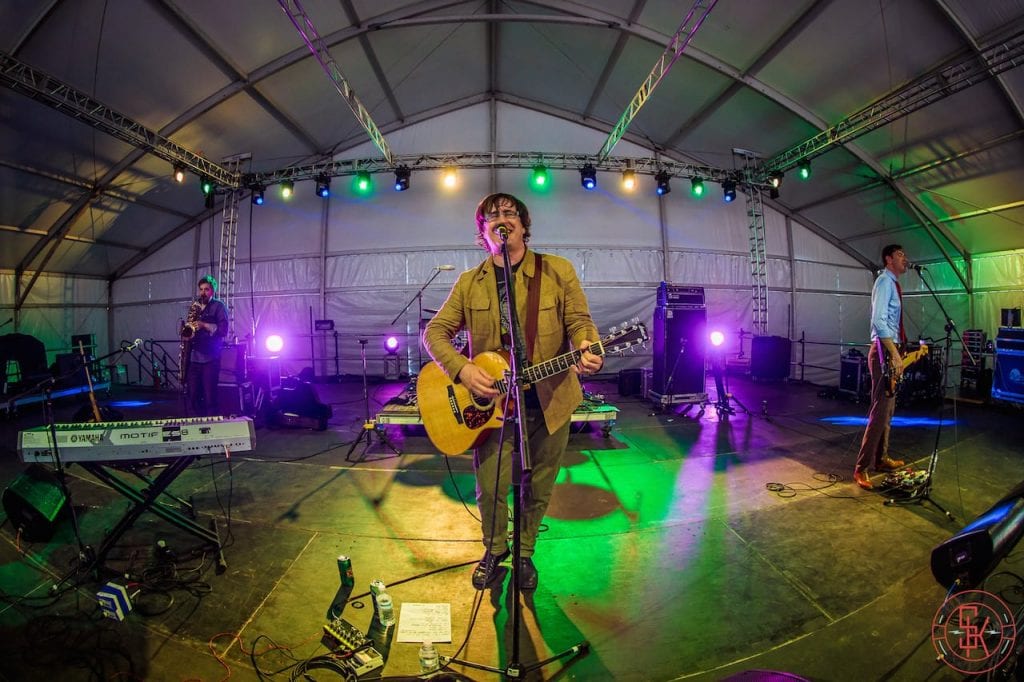 John Darnielle and the Mountain Goats at the 2015 Shaky Knees Festival. (Photos by aLIVE Coverage)

The lead singer for the Mountain Goats stood on the smallest of five stages in downtown Atlanta during the first day of the 2015 Shaky Knees Festival. He was thinking aloud. The rest of the Mountain Goats were waiting offstage during his three-song solo acoustic set, and he had decided to play a few songs on somewhat of a whim.

These were deep cuts. “Alpha Omega” references boiled peanuts from Cairo, Georgia, and “Cubs in Five,” from 1995’s Nine Black Poppies, rattles off a list of seemingly impossible accomplishments.

The elaborate story behind why he decided to play these tunes to end his mini-set stopped at the tip of his tongue, he said. He seemed to want to say more, but this was not the venue for long explanations — there was simply no time. So he played the tunes, and moved on. 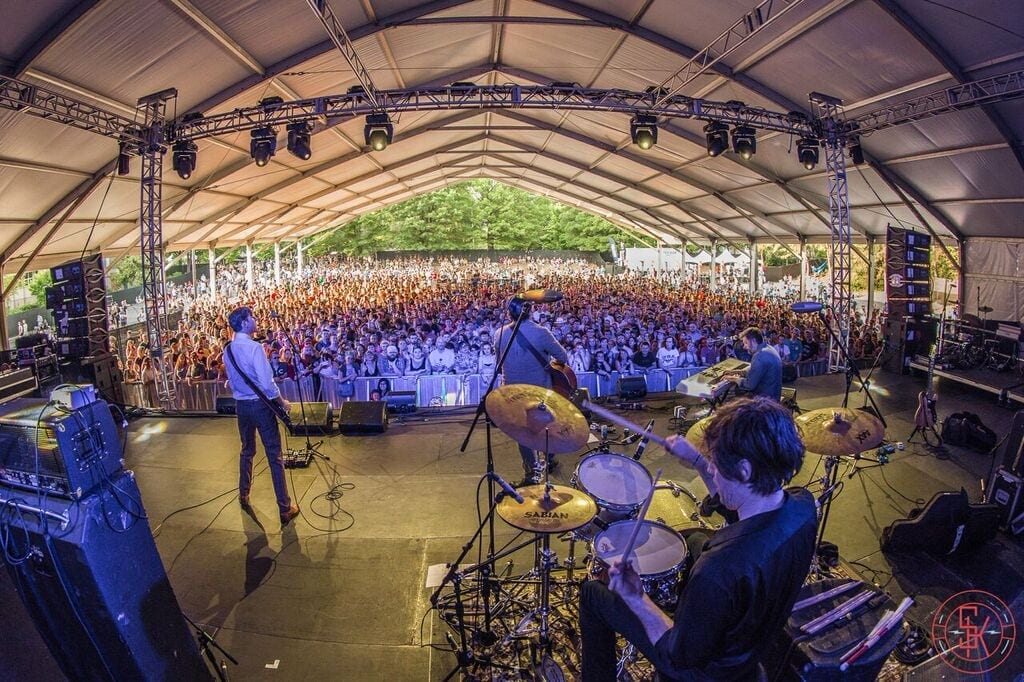 While promoters packed the first two days of the Shaky Knees Festival last weekend with a plethora of must-see bands that gave thrilling, memorable performances, short, festival-length sets meant there wasn’t a lot of time for discussion from the stage.

A few bands chatted at the audience between songs, and more prominent bands were given more time to stretch out. But most acts tried to pack in as much music as possible into a tiny window. This gave the thick crowds more music for their money, but cut down on the intimacy that may have been created with a bit of stage banter.

Shaky Knees has grown rapidly, moving in its first two years from the Historic Fourth Ward Park to Atlantic Station. It hasn’t become an established fixture in any one place — as, say, how Music Midtown is closely associated with Piedmont Park — and this year’s setup at Central Park and the Atlanta Civic Center seemed to suit the growing festival well.

But the weekend wasn’t without issues. While the setup of five stages spread out across the space was perfect for presenting a vast array of bands back-to-back-to-back, the distance between stages meant it certainly wasn’t possible to keep up a back-and-forth pace for all three days of the festival. 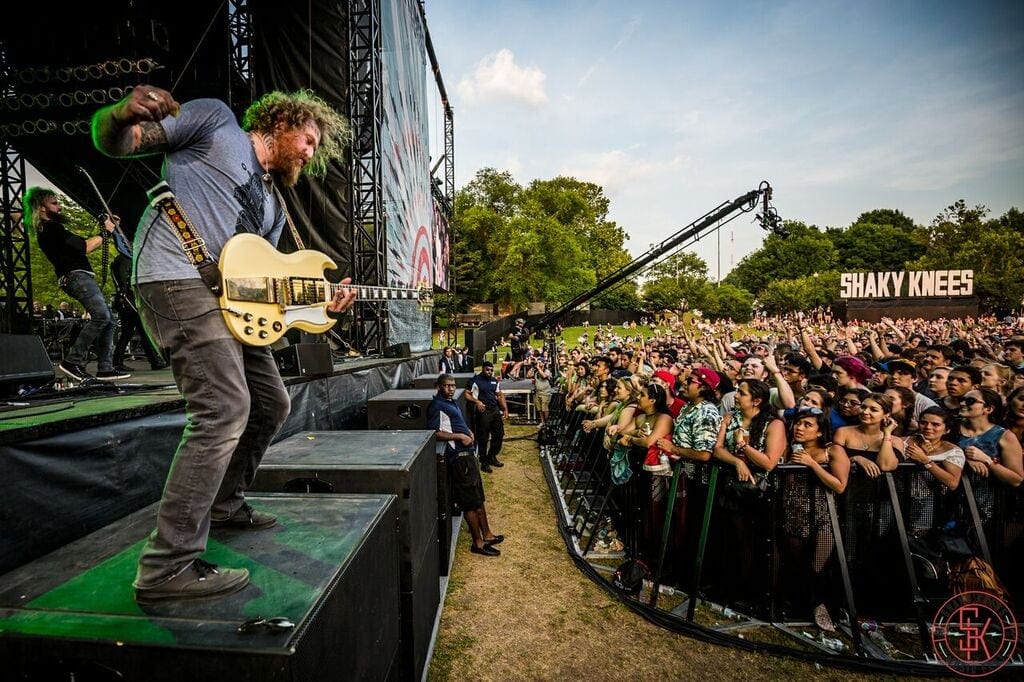 Atlanta’s Mastodon on the main stage.

For the first two days, the concerts were well attended but not oppressive. Really, the only time the enormity of the crowd could be felt was during the nightly headlining concerts or when standing in line for food.

On Saturday, Wilco’s set alternated between amped up noise and vocal-driven acoustic music, and this was never more present than on “Via Chicago.” A love letter to the city framed by Jeff Tweedy’s warm vocals and wistful acoustic strumming, the song is occasionally interrupted by the aural equivalent of an “L” train rumbling past, a sonic device led by guitarist Nels Cline’s aggressive wall of distortion.

The live embodiment of public transit is a shock at first, but it’s a nod to Wilco’s aesthetic. This is one show that begged for a longer time slot. 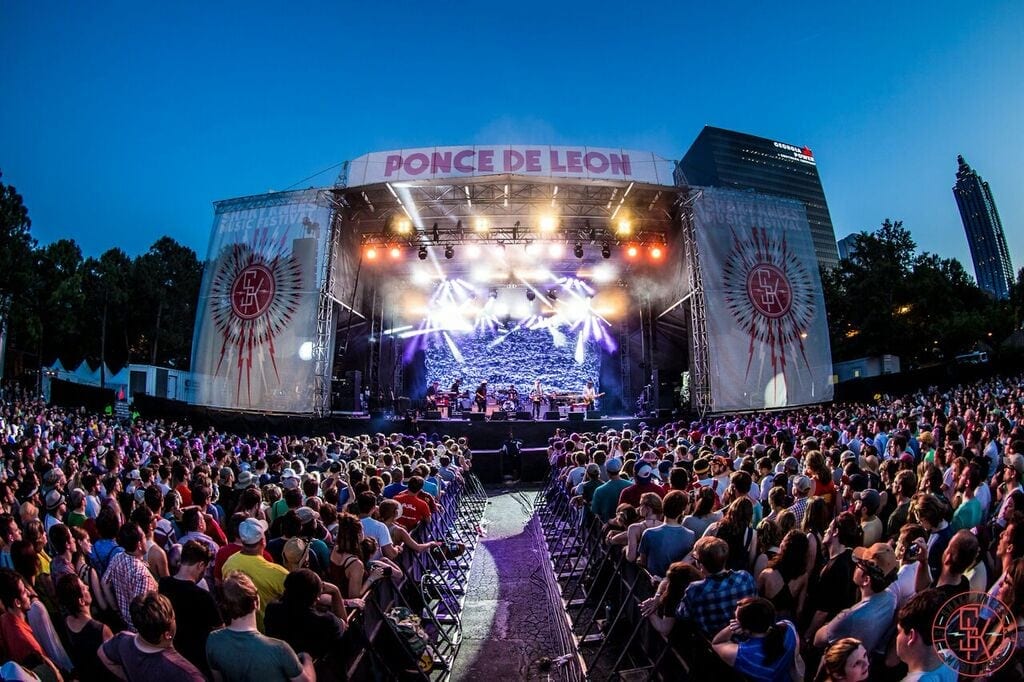 Wilco’s set with the Atlanta skyline.

A few hours before, Built to Spill had sprinkled tunes from its brand-new album, Untethered Moon, with tracks from the band’s earlier records on the adjacent smaller stage. The group ended its turn with a faithful, if slightly ethereal, “Don’t Fear the Reaper” (the band apparently played a show comprised almost entirely of cover songs the same night at the Earl).

In between Built to Spill and Wilco, Neutral Milk Hotel fit the festival in as a stop on its reunion tour. Beautiful in its fragility and simplicity, singer and guitarist Jeff Magnum has a voice that seems on the verge of cracking or all of a sudden disappearing.

After an hour of blistering bits of electronic fuzz, songs about loss and love, and a star turn by a crack horn section, Magnum came forward to sing “Two Headed Boy.” The festival could have ended right there, with Magnum standing at the edge of the stage, strumming an acoustic guitar on a perfect spring evening.

Downtown Atlanta suddenly felt peaceful, a place to spend a few hours instead of somewhere to flee as soon as 5 o’clock rolls around.