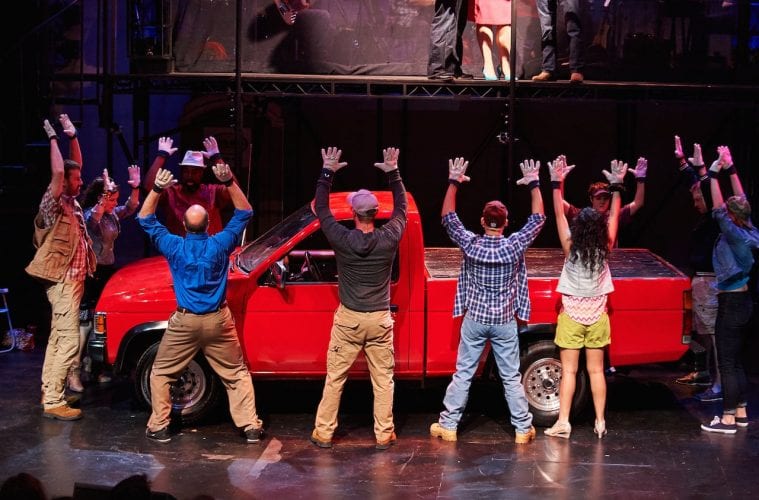 Review: Aurora’s “Hands on a Hardbody” offers one of the year’s stand-out ensembles 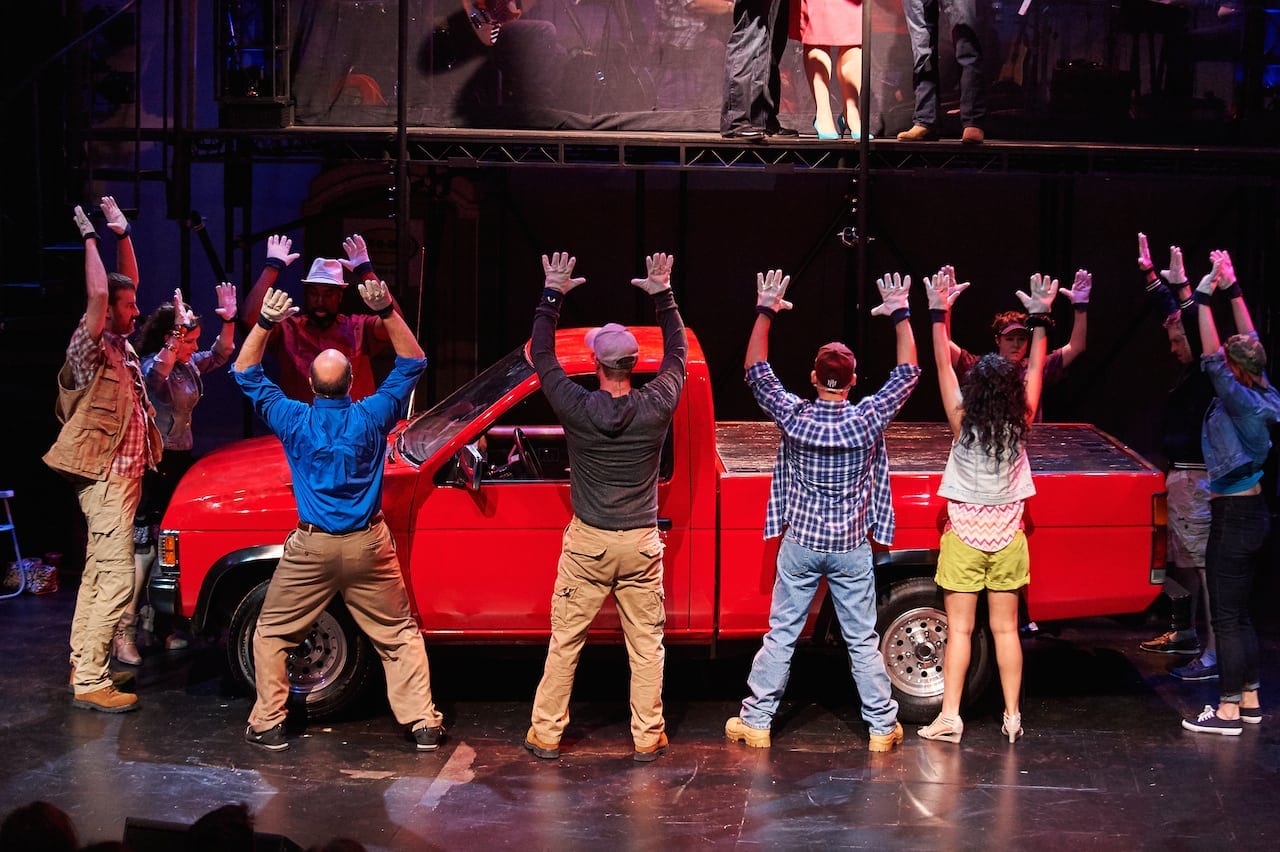 A cherry-red pickup truck sits in a car lot. It’s the prize awaiting one of 10 contestants in the likable new musical Hands on a Hardbody, produced on Broadway in 2013 and now starting to make regional rounds.

Running through May 31 at Aurora Theatre, it’s a tale of Texans hoping a new Nissan will take care of holes in their own lives. Their task — keep their hands on a new truck for longer than the other nine, with bathroom breaks sprinkled throughout the day and night.

Benny Perkins (Rob Lawhon) is the returning champion, dispensing advice to his competitors. He thinks that former marine Chris Alvaro (Jeremy Wood) may be his biggest threat to a second consecutive triumph, but their fellow contestants are determined.

Kelli Mangrum (Randi Garza) and Greg Wilhote (Ben Davis) are two of the younger participants who take something of a liking to each other, while Heather Stovall (Laura Floyd) is a looker the dealership staff needs to win. Jesus Pena (Ricardo Aponte) is in school hoping to become a veterinarian and Norma Valverde (Diany Rodriguez) is a woman whose religion is paramount to her.

Rounding out the contestants are good-natured, Louisiana-born Ronald McGowan (Eric Moore), Janis Curtis (Jill Hames) — a mom whose husband Don (Steve Hudson) is rooting her on from the sidelines — and J.D. Drew (Matt Lewis), whose life has changed after an accident and whose wife Virginia (Wendy Melkonian) seems to have run out of patience with him.

One by one, the contestants drop out, unintentionally or not. It’s like They Shoot Horses, Don’t They? with songs, a car and an upbeat feel instead of depression and a dance floor. 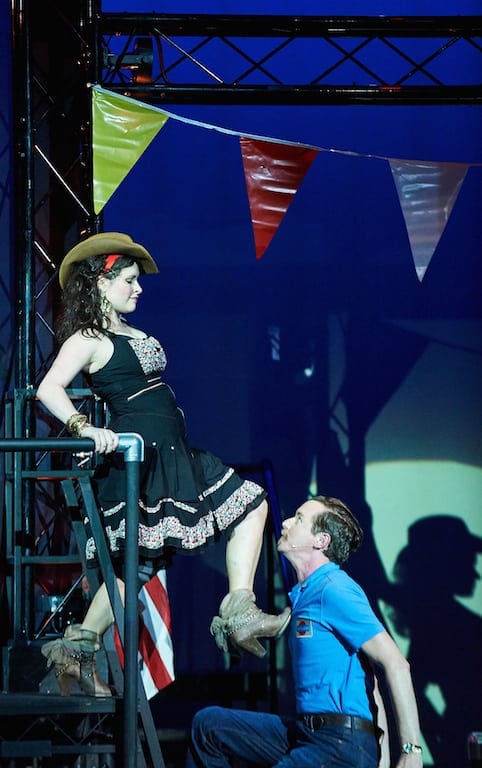 As penned by playwright Doug Wright (about as far from his Pulitzer Prize-winning I Am My Own Wife as humanly possible) with lyrics and music by Amanda Green and Trey Anastasio (better known as the guitarist for Phish), Hands on a Hardbody is scrappy. Based on a 1997 documentary, it’s hard not to enjoy.

The opening number, “Human Drama Kind of Thing,” sets the tone for the piece (“Everybody’s broke here, trying to make ends meet, pay-your-debt-back kind of setback, got to get back on our feet”) as well as the rules for the marathon.

This is a musical that goes on too long with many characters to juggle. A one-act, tightened version minus a half dozen numbers would be preferable. Some of the near 20 songs start sounding alike in Act II. As well, while Melkonian’s Virginia doesn’t have enough to do, Aponte’s Jesus has perhaps too much to do — and gets stuck with a clunky song, “Born in Laredo.”

For the most part, however, it all goes down quite easily. The cast is large and talented; certainly this is one of the year’s stand-out musical ensembles.

There’s only so much they all can do with their hands attached to a pick-up truck for most of the production but choreographer Jen MacQueen manages to make the most of the musical numbers. To his credit, director Brian Clowdus — who has jumped in to fill the shoes of former director Hunter Foster — makes this watchable and often amusing. Many of the numbers are spirited, particularly Garza and Davis’ “I’m Gone,” and the cast ultimately make us care about these folks.

Rodriguez — who leads a terrific Act I number called “Joy of the Lord” — and Lawhon are the standouts in the cast, although almost everyone has an individual highlight. Hames’ three-syllable pronunciation of the word hair is priceless, while married couple Wood and Floyd seem to be born for this kind of musical theater.

The music direction by Ann-Carol Pence, who leads a band of herself and six others, is typically sharp and Elizabeth Rasmusson’s costumes seem appropriate and not overdone. (In the casting notes, Cindy Barnes is described as a former Miss Gregg County, still fond of pageant hair and pastels, and Meisel and Rasmusson capture that.)

Hands on a Hardbody has a lot in common with Aurora’s spring musical of last season, The Unauthorized Autobiography of Samantha Brown. Both musicals can be hit or miss but in the end are redeemed by catchy songs and a lively cast. This is a goofy, unorthodox production that makes good on its premise.