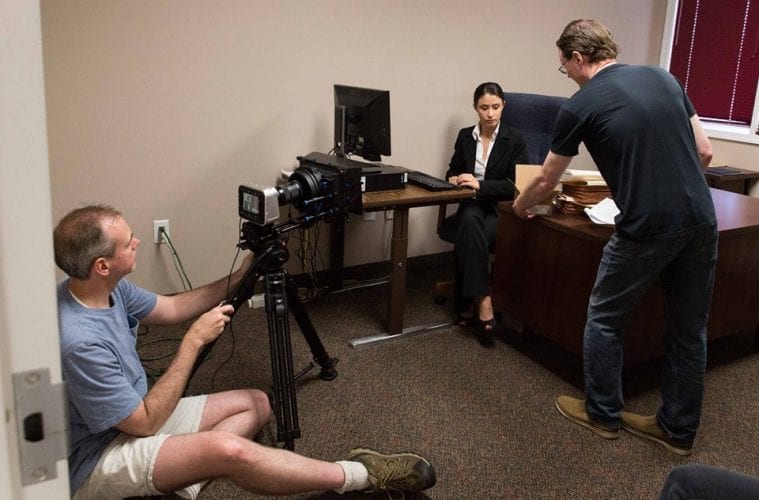 A new film short that features the work of three Atlanta Ballet company dancers will receive its world premiere Saturday evening at a block party at the ballet’s headquarters on Marietta Street. It’s called Resting Places, by Adam E. Stone, and will show two times — at 5:45 p.m. and again one hour later. The dance sequence was choreographed by Tara Lee, and stars Nadia Mara and Heath Gill. Mara plays a woman in the corporate world who gave up her aspiration to be a ballerina, but still dances in her dreams. It was filmed July 11 in Carbondale, Illinois.

This is Stone’s second film short to feature Lee’s choreography and Atlanta Ballet dancers. Last year’s Janet: A Silent Ballet Film — a tribute to Janet Collins, the first African-American dancer to become a full-time member of a major American ballet company — premiered online for the 2014 International Black Women’s Film Festival and also showed at the 13th annual Urban Mediamakers Film Festival in Norcross, along with several other festivals.

Stone says that when he decided to make that film, he researched American ballet companies and decided to approach Atlanta Ballet with the idea. “Atlanta Ballet has a reputation for pushing the envelope,” he says. “Looking at Camino Real; how many ballet companies in the U.S. would have attempted that? I saw some of Tara’s choreography online and read some interviews with her, and I thought she’d bring a unique perspective to Janet.”

With Resting Places, Stone returned to Atlanta Ballet. He came up with the broad idea and then let Lee take over. Another dancer was supposed to play the lead role but when scheduling problems popped up, Mara was substituted in.

“Originally, I envisioned a slightly different look for the lead character,” Stone says. “Nadia learned the choreography in a matter of days and it was actually stunning to watch her dance. Heath, too. They are both phenomenal dancers, easy to work with and yet capable of producing such high quality work.”

Resting Places is an elegant, entrancing work that is partially set in a cemetery, where Mara’s dreams spring to life. Stone has already begun to submit it to film festivals both here and abroad.

“I’m a storyteller above all else, and I believe ballet films have tremendous potential as storytelling devices,” says Stone.

He disagrees with author Jennifer Homans, who declared that ballet is a dying art form in her critically acclaimed book Apollo’s Angels. “I think Atlanta Ballet is proof of that,” Stone says. “They give the art form of ballet their blood, sweat and tears each and every day, and there’s power in that — great power. In my opinion, there’s no reason ballet can’t be one of the premiere art forms of the 21st century and beyond.”

The party, Saturday at the Michael C. Carlos Dance Centre from 5 to 8 p.m., will also feature a “Dunk-A-Dancer” tank and photo booth with the dancers, dance classes and the chance to purchase Atlanta Ballet wardrobe.

The event is free, but a $20 donation is requested. The money will go to the Dancers’ Resource Fund, which provides grants to dancers who have retired and are moving on to new careers.