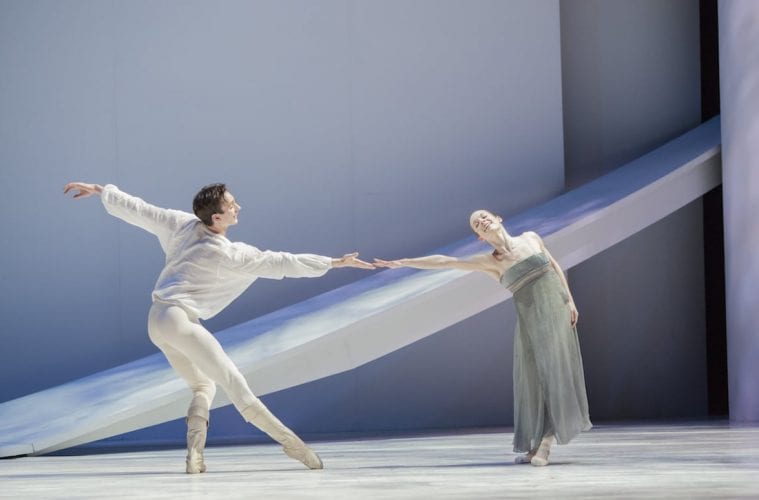 Christian Clark found his home when he was eight years old.

Clark earned his tights and then stayed on even after his sister gave up her dance aspirations. Now in his 13th season as a company dancer, Clark reprises the role that brought him wide acclaim last season: Romeo in choreographer Jean-Christophe Maillot’s version of Shakespeare’s Roméo et Juliette. The run begins tomorrow night at the Cobb Energy Performing Arts Centre and goes through February 14. He also starred as Romeo in Michael Pink’s version, which Atlanta Ballet produced in the 1990s. The Maillot ballet, which debuted in 1996 with the Les Ballets de Monte Carlo, represents a major departure from classical versions. ArtsATL’s Kathleen Wessel said last year’s production was “smart, beautiful and epic” and it was named as the best Atlanta dance production of 2014.

Clark and Alessa Rogers as Juliette found themselves in star-making roles, singled out for their smoldering onstage chemistry. “This production was my first time dancing a meaty role with Alessa,” Clark says. “I’d never worked with her much before.”

They partnered again last December for the erotically charged Arabian Dance in Atlanta Ballet’s Nutcracker and again wowed audiences with a performance that was informed by their work in Roméo et Juliette. “From a mechanical standpoint, you get used to each other’s bodies, and how she partners and how I partner,” says Clark. “R and J definitely contributed to the comfort level we had on stage with the Nutcracker. It’s a lot different role, a lot more sensual to do the Arabian, and we had so much fun dancing it together.”

The role of Romeo has upped Clark’s profile with Atlanta Ballet, a place that has been his home away from home since he was in the second grade.

He grew up in Decatur, and his first show with Atlanta Ballet was performing in the Nutcracker as a preteen. “I was supposed to be a little soldier and ended up doing a party kid because someone got hurt,” Clark says. He laughs, then adds, “I’ve been here a long time.” Being around the professional dancers was inspiring. “What got to me more than anything was the atmosphere between company members backstage,” he says. “They had such camaraderie and inside jokes. As a kid, I was magnetized to that energy.”

Clark’s sister dropped out of dancing after six or seven years, but he stayed with it and tried to balance his dual passions of dance and baseball. “My dad and I worked a lot on baseball,” he says. “I played shortstop. Getting into high school, that’s when I had to make the choice. I wanted to play baseball. But in dance, if you miss classes and rehearsals, you can’t be in the piece, and it’s the same thing with baseball.”

Ultimately, Clark picked dance. “There were more girls in the ballet class,” he quips.

But his decision was informed. Clark showed enough talent that he was placed into the school’s “pre-professional” division. “Once I got into that division, I was on a pretty proven track,” he says. “You’re working hard every day, working with the company dancers.” The kiss that launched a tragedy.

The final decision came when Atlanta Ballet’s production of Peter Pan toured in London for the Millennium. “As a teenager, I went through phases where I wasn’t sure if I wanted to do it,” Clark says. “In Peter Pan, I was a Lost Boy. We were in London for three weeks. I saw how much fun everyone was having. That definitely made me want to do this as a career.”

Dancing the part of Wendy in that production was a fellow company dancer named Naomi Dixon who caught Clark’s attention. When the company toured Peter Pan a year and a half later in Florida, they began to date. “We got married in 2008,” Clark says. Naomi-Jane Clark retired as a dancer and the couple had a son, Adrian, two years ago. “He’s keeping us busy, keeping me tired. It’s been a bit of a challenge, being a dad and doing this as well. But we’re managing, and we’re learning every day.” The Atlanta Ballet dancers participated in auditions for Roméo et Juliette a year before the original production, and Clark didn’t know he’d be playing Romeo until a couple of weeks before rehearsals began. The company brought in two dancers — Asier Uriagereka and Giovanna Lorenzon — from Monte Carlo to teach the ballet to Atlanta’s troupe. “I was thrilled to get that role, but I was super intimidated,” says Clark. “We’d seen videos of the production and loved it. The dancers on the video and the dancers we’d seen from their company were incredible.”

He says that he and Rogers reached a comfort level very quickly. “Technically, she’s a bit of a freak of nature,” Clark says. “She has this facility that a lot of people would die for with her legs and feet. She’s an amazing artist. She’s so open and relaxed in the studio. If something goes wrong, you’re not beating yourself up about it. You just laugh about it and fix it, then hop right on to the next thing.”

It was a pleasant surprise when the troupe announced it would reprise Roméo et Juliette this season, and the ballet is heavily promoting the onstage chemistry of Rogers and Clark.

“There’s a lot of tension with a ballet like Roméo et Juliette,” says Clark. “It doesn’t come around that often, and you want it to be great. I feel so lucky to be doing it again this year. It’s a masterpiece of a ballet.”