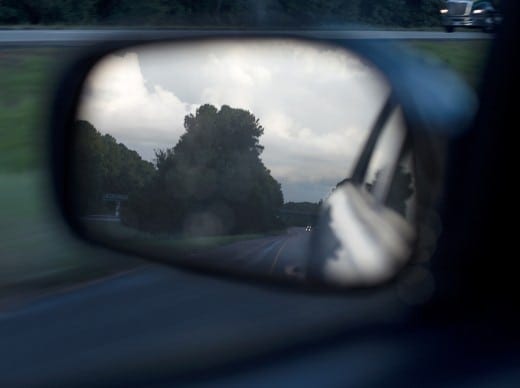 Review: Beth Lilly’s photos take us on a provocative ride in “A Moving Image of Eternity” at Whitespace 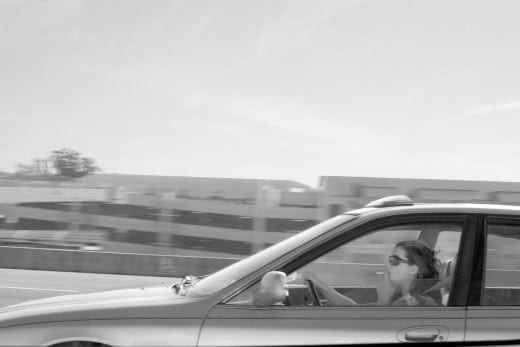 Whitespace is the kind of intimate setting that provokes critical dialogue, and Atlanta-based artist Beth Lilly does just that in her exhibition A Moving Image of Eternity. (Through February 14)

Across four series of photographs, Lilly stages the contemporary American experience in the familiar confines of a car. This work builds on themes explored by photographers Robert Frank and Andrew Bush. It confronts the idealized road trip as a symbol of liberation by exhibiting private, isolated experiences visible to the spectator. 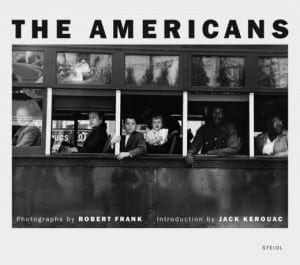 Frank assumed the role of an outside observer in his iconic book The Americans (1958), which documented his encounters as he traveled by car throughout the United States. The vehicles depicted in his photographs identified public spaces as stylistically American. Not only were these objects used to mark place but also to symbolize a way of life. Frank initiated a language used to reflect on American identity evident in A Moving Image of Eternity.

Like Frank, Bush traveled along roads of the American Southwest to photograph images that would create his Vector Portrait (1989–97) series. These works capture characters en route. Bush’s photographs place an emphasis on the figure by repeating a compositional format that crops the front and tail ends of the car. The landscape orientation of the image provides a glimpse of the style of the car, which reflects the personality of the driver. The pronounced color of the car grabs the viewer’s attention in a way parallel to the gesture of the figure.

Lilly peers into the personal spaces of passersby as a voyeur seeking emotional vulnerability. The first series, Lost in Thought, is black-and-white images of moving forms encapsulating still figures. The tight frame simultaneously constricts the figure and extends the movement of the car outward. 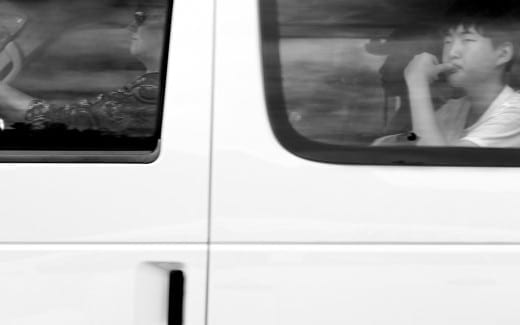 Beth Lilly: You can still love what you cannot have, 2014, pigment ink on kozo paper.

You can still love what you cannot have (2014) — a title taken from a fortune cookie — aptly describes the longing gaze of the boy framed by the windowsill. Lines detailing the car door direct the eye beyond the edges of the photograph. Lilly invites the viewer to imagine the full forms dissected in her zoomed snapshot. The still figures stand out against blurred surroundings reflected in the window. This contrast captures movement between two worlds, the solitary space within the car and the chaotic street surrounding it.

Perched on stone blocks are the three wooden boxes that make up Lilly’s second photographic series, Driven. Photographs of exasperated drivers stopped in traffic are hinged on rods inside the boxes. Visitors can flip through the photos using handles in the outside of the boxes. The looping images create a cinematic momentum as a way of dramatizing the immobile vehicle. The irony of the static narrative unfolds as the participant turns the handle clockwise.

For The Right Way, a group of five color photographs, the artist uses a composition similar to Bush’s, focusing on the figures depicted in transit. The gaze of the spectator is met by glares from the subject. This exchange of limited communication leaves room to speculate about the other. 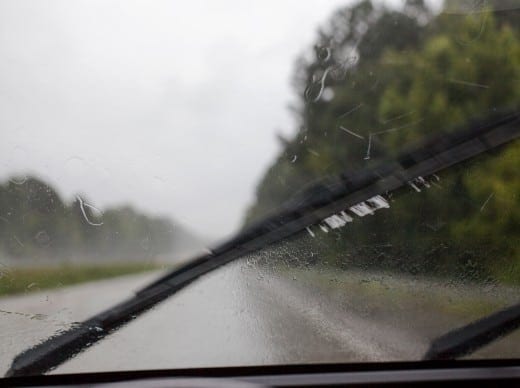 In the fourth series, The Passenger, the point of view shifts from an external point of view to an internal perspective. The photographs capture landscape imagery filtered through the shell of the car. This work suggests that the pursuit of the open road perpetually impedes experience.

A Moving Image of Eternity exposes the behavior of individuals in private spaces. Each series of photographs provides commentary on the emotional landscape of navigating through eternity.