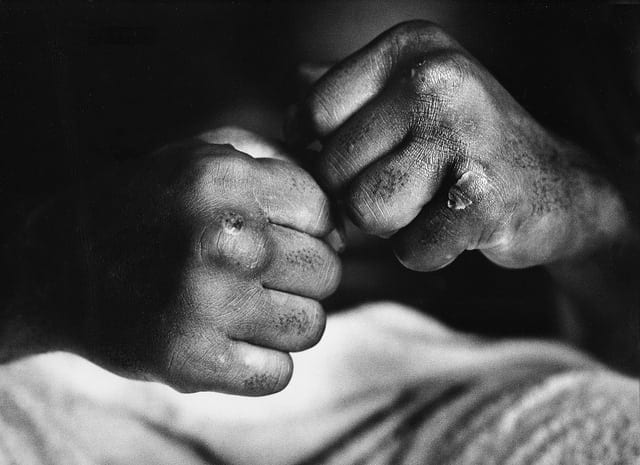 The work of photographer Gordon Parks is popping up all over Atlanta. You can see Segregation Story at the High Museum and Jackson Fine Art (recently reviewed here), a revelatory exhibition of photos taken for a 1956 Life photo essay notable not only for Parks’ candid documentation of racial inequality in the Jim Crow South but also for his brilliant use of color. Many of the photos are featured in both shows, but there are also a few that are exclusive to each exhibition.

Parks was best known for his black-and-white photography, which is the focus of Arnika Dawkins Gallery’s current exhibition, through March 28. Various genres are on view, from exquisitely rendered landscapes from his travels in Canada, Europe and Maine to his iconic photos of workers. Among them is American Gothic, the groundbreaking 1942 portrait of Ella Watson, a Washington, D.C., office cleaner posing with mop and broom in front of the American flag.

But the centerpiece is Gordon Parks: American Champion, 18 images of Muhammad Ali. The boxer was one of the most photographed figures of the 20th century. Images taken by renowned photographers of his era helped shape his public persona: The force of fury. The irrepressible braggart. The outspoken symbol of black pride. The gleeful punster. The handsome, charismatic charmer.

In contrast, Parks’ photos capture Ali’s private side — relaxed, casual, introspective and more approachable than the often intimidating, larger-than-life legend. In a rare glimpse of Ali contemplating his own public persona, Parks shoots him lying on a cot reading an article about himself as his minions hover in the background. It’s a canny juxtaposition of the athlete at rest and the ferocious fighter with raised fists in the magazine photo.

One of the most unusual portraits, Muhammad Ali in Training, Miami, Florida, 1966, shows the flip side of his warrior stance. Ali is shirtless with his head bowed toward the ground, his taped wrists and hands thrust forward. The photo has a poignancy that is not associated with the man he was in the 1960s. In similar fashion Parks’ portrait of Ali in a hoodie (Untitled, London, England, 1966), seated in the backseat of a car, captures a sense of loneliness hidden from his public.

One of Parks most well-known shots (Muhammad Ali, Miami, Florida, 1966) is a close-up of the fighter glistening with sweat, his eyes fixed on a distant point. The expression is enigmatic, but the photo also reveals something that can be detected in every shot — the implicit trust between the subject and the photographer.

Parks was well known for spending time with the people he photographed. Getting to know them personally was part of his method. You see and feel this in certain photos in Segregation Story when the subjects stare directly into the lens. It’s one reason why Parks’ photos of Ali are so affecting.

When Parks was first sent to profile Ali in 1966 for the Life photo story “The Redemption of a Champion,” he was ambivalent about the fighter, stating “Muhammad was a gifted black champion and I wanted him to be a hero, but he wasn’t making it.” At the time, Ali had alienated many of his fans for his opposition to the draft and converting to the Muslim faith, changing his name from Cassius Clay to Cassius X to Muhammad Ali.

But Parks was won over by the fighter, who admitted, “I said things and did things not becoming of a champion.”

Parks, who was 30 years older, became something of a father figure.

By the time Parks returned to shoot Ali again in 1970, the fighter had been stripped of his title for draft evasion and was battling a $10,000 fine and prison conviction for the same reason.

These photos reflect not only a more intimate, humanizing view of the fighter during this difficult period but also the pair’s mutual respect.