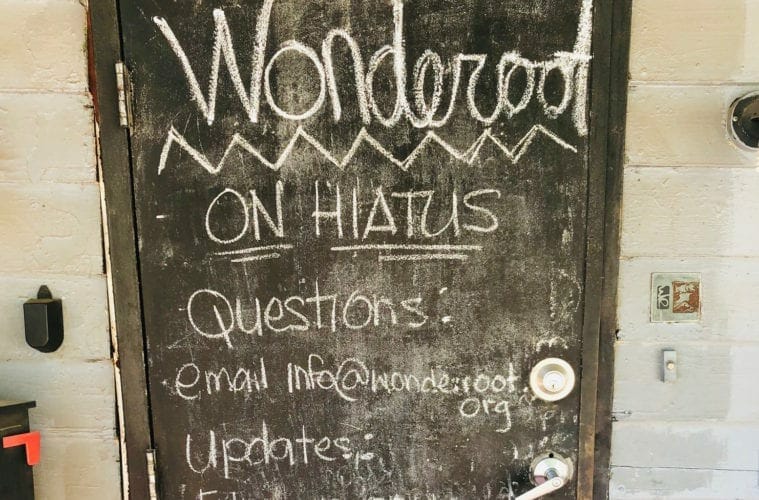 The WonderRoot building, on Memorial Drive SE, as it appeared in late June, had gone unoccupied since December. (Photo by Matthew Terrell)

WonderRoot, one of Atlanta’s most prominent arts nonprofits, has closed its doors.

In a letter shared Thursday afternoon with ArtsATL, the WonderRoot board said it “voted unanimously to wrap up the operations of the organization.” The board vowed to collaborate with the community to find permanent homes for the projects and programs of WonderRoot.

“We firmly believe in the need for the work that we began, and we look forward to supporting the work of organizations who pick up where we left off,” the letter states. “Each of us remains personally committed to WonderRoot’s mission: improving the cultural and social landscape of Atlanta through creative initiatives and community partnerships.”

WonderRoot was cofounded in 2004 by Chris Appleton, who became the executive director and face of the nonprofit.

It opened the WonderRoot Community Arts Center on Memorial Drive as a community gathering spot and creative work space in 2008 and has partnered with the High Museum of Art, MARTA and the Atlanta BeltLine. Most recently, WonderRoot partnered with the Atlanta Super Bowl Host Committee to commission 11 artists to paint murals across the city focused on Atlanta’s journey in civil rights and social justice.

The organization was rocked in February when an open letter to the board accused Appleton of abusive behavior, racism, sexual and financial improprieties and discrimination against vulnerable individuals.

The open letter was signed by eight members of Atlanta’s arts community: MINT founding director Erica Jamison, artists Stephanie Dowda and Amanda Mills (both of whom are past ArtsATL contributors), Angela Davis Johnson, Jessica Caldas, Matthew Rosenfeld, Jennifer Lobsenz and Stephanie Kong. The letter was signed anonymously by seven others.

In the open letter, the group said they had “endured egregious and systematic harm” under Appleton’s leadership and the organization’s “top-down workplace culture of inveterate disrespect and intimidation — including frequent outbursts and insults, consistent violation of personal and professional boundaries, inappropriate attempts at intimacy . . . and deflection of any responsibility for mistakes.”

Appleton was placed on a leave of absence, and the organization launched an independent investigation into the allegations. Appleton later resigned.

A third-party investigation led by a law firm found that Appleton did repeatedly behave in an “unprofessional manner” with his staff. His behavior included becoming irate with staff, yelling, outbursts and using profanity when upset. The report said Appleton also had challenges with financial management. But the investigation did not find any evidence of sexual impropriety or racism.

The individuals who signed the letter have said they stand by their allegations, and have expressed their frustrations over WonderRoot’s internal investigation.

“I find both the presentation of the investigation’s findings, as well as the findings themselves, disappointing if not surprising,” said Jennifer Lobsenz, a former program director at WonderRoot and one of the signees of the original letter to WonderRoot’s board, when the results were released. “The investigation’s findings are simply not correct. The only conclusion I can draw is that this investigation strategically served the purpose of managing both WonderRoot’s and Chris’ public-facing reputation during a time of ‘crisis.’ It has been clear that individual and organizational reputation preservation has been the focal point from the beginning.”

WonderRoot’s board hired Brian Tolleson as interim executive director but ultimately was not able to find the funding to survive.

(CORRECTION: This post has been updated from the original version to remove information that was incorrect, and to add context and clarity. ArtsATL apologizes for the errors.)