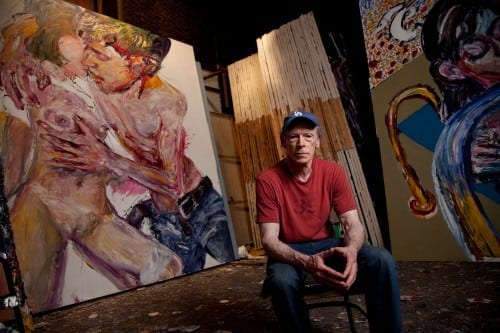 Lucky are the individuals whose vocation and avocation are one. Count Jerry Siegel among them.

The Atlanta photographer has, for 18 years and counting, merged his passion for shooting people and his pleasure in hanging out with artists into a project that has yielded his new book, “Facing South: Portraits of Southern Artists,” and an exhibit now at the Mobile Museum of Art, which will travel to the Jule Collins Smith Museum at Auburn University (co-sponsor of the book with the University of Alabama Press) and the Telfair Museum’s Jepson Center for the Arts in Savannah.

Born, raised and educated in the South, Siegel, 54, has spent his career plumbing its particular character with a loving but unsparing eye. Shooting these portraits, however, began as a hobby. At first he just photographed his friends, among them members of the New South School in Alabama and self-taught Georgia artist R.A. Miller. In 1995, William Eiland, director of the Georgia Museum of Art in Athens, asked Siegel to photograph Lamar Dodd for a biography he was writing.

“Eiland had seen these handful of portraits,” Siegel recalled. “He suggested I had a great series started of late-career Southern artists.”

The remark inspired him to move beyond his own circle, seeking subject ideas from gallerists and other artists and calling up artists he had always wanted to meet. “Facing South,” comprising 100 of the 140 artists photographed thus far, encompasses those of national note — such as Thornton Dial, who graces the cover, and William Eggleston — and those little known beyond the region. The group spans a couple of generations. In fact, quite a few of the artists have died, which adds a documentary gravitas to the enterprise.

Siegel, however, professes no grand plan. “I never intended this to be definitive,” he said.

He is similarly unprescriptive in his approach to making the portraits. “I have no preconceptions. I keep my eyes and ears open and see what interests me, and I look for the best light. But there is no posing. The idea is to let them be themselves. You get a truer portrait that way.”

“I had been photographed by other photographers who had styled me and my studio before the shoot,” Cooper wrote in an email. “I guess I was expecting some sort of ‘hair and makeup’ thing. It was a very laid-back session.

“I had just gotten back from running an errand on my bicycle and had on the clothes I had put on that morning. Jerry came in with a hand-held camera and we just started talking, and he moved about the space. I remember thinking I should change clothes or wash my face and comb my hair.

“I felt I wanted my work included in the picture. Not just a picture of me. I think I positioned myself with a painting always behind me. That made me feel more comfortable…. We talked a lot, and Jerry constantly shot pictures. Maybe he changed lenses at some point and I moved over to a straight chair in front of my painting wall.

“I don’t know how many frames he shot, but it seemed like hundreds. Even though the session was very relaxed, my body felt more and more tense as time progressed. Somehow these pictures were the best portraits, and one was chosen for the book.”

Like Cooper, most of the artists chose to be photographed in their studios or homes. That window on the environments artists create for themselves is one of the pleasures of the photographs. Their strength as images is another. Siegel has managed an impressive compositional variety without resorting to visual or digital tricks.

Siegel’s overarching achievement, as former High Museum photography curator Julian Cox notes in one of the book’s essays, is his ability to convey the humanity of his subjects. He also has a keen eye for their particularity.

“When Ida Kohlmeyer‘s daughter saw the picture, she told me, ‘You captured her just the way I see her,’ ” Siegel said. “That to me was the highest compliment.”