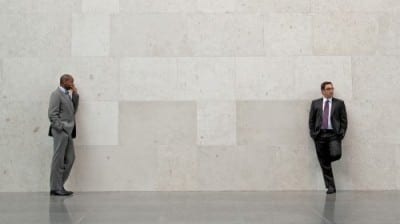 Saxophonist Branford Marsalis takes his time. During his Saturday concert with pianist Joey Calderazzo at Spivey Hall, Marsalis’ downshifted speed applied to both the programming — languid ballads peppered with occasional spunkier numbers — and his solos, careful expressions of storytelling that progressed not in a haste of notes but by deliberate syncopations and thoughtful sequences. Marsalis, of course, adapts his style on the soprano and tenor saxophones to each performance situation, and in this setting, Calderazzo’s light hand and rubato playing usually called for a restrained attack.

While Calderazzo played a walking bass line with his left hand most of the time, performing without a true time-keeping bass player allowed the duo to bleed tempo out of the tunes, to stop and start, and generally to stretch out musically. Such tunes as “La Valse Kendall” and “The Bard Lachrymose” set the tone for the evening, but hints of the pair’s raw power came forward in “One Way,” with a bubbly, R&B piano accompaniment under an aggressive saxophone melody.

Marsalis’ rise as part of one of the most storied families in jazz has been well documented. The lesser-known Calderazzo got his first big gig as part of the late tenor saxophonist Michael Brecker’s quintet — toward the end of the night, the duo played Calderazzo’s “Hope,” written for Brecker as he battled cancer — but the pianist and Marsalis have been friends since Calderazzo was 14. After the death of Marsalis’ longtime pianist Kenny Kirkland in 1998, Calderazzo joined the Branford Marsalis Quartet. The piano-saxophone pairing came about slowly and was unveiled to the world at the 2009 Newport Jazz Festival. Last year, Marsalis and Calderazzo released the superb CD “Songs of Mirth and Melancholy” on Marsalis Music.

Nearly 15 years of performing together in a group, and experiences playing together that go back to 1990, have helped form a strong musical and personal bond between Marsalis and Calderazzo. Throughout the 90-minute set, they exhibited such comfort that they always played in perfect lockstep, even on tunes such as the out-of-time “Endymion,” parts of which sounded like an unmetered dialogue between piano and saxophone.

Marsalis is not a flashy player, at least in this setting. Contemporary saxophonists such as Joshua Redman tend to explore the altissimo range of their instruments, constantly playing notes far beyond the traditional range by changing their embouchure and using alternative fingerings. Marsalis stayed away from such fireworks for most of the evening, making a carefully placed ascension to the stratosphere, or a slow escalation to a double-forte barrage of vertiginous notes, all the more powerful.

Marsalis kept his soprano sax close, using the smaller instrument for most of the introspective numbers. The saxophonist, who like his brother Wynton has also recorded classical repertoire, has a short, quick soprano vibrato, but his sound is open and warm; the notes get a little more pointed as he ascends the instrument, but his bottom and middle ranges are rich and comforting.

Because of his jazz cachet, it was Marsalis who got people into the seats, but the evening felt like a true collaboration. Calderazzo played a large role, not only as the anchor of each number but as a savvy and compelling improviser. After such a long musical and personal friendship, the connection between the two shone through in the music — which, while it was usually beautifully subdued rather than fiery, was incredible all the same.