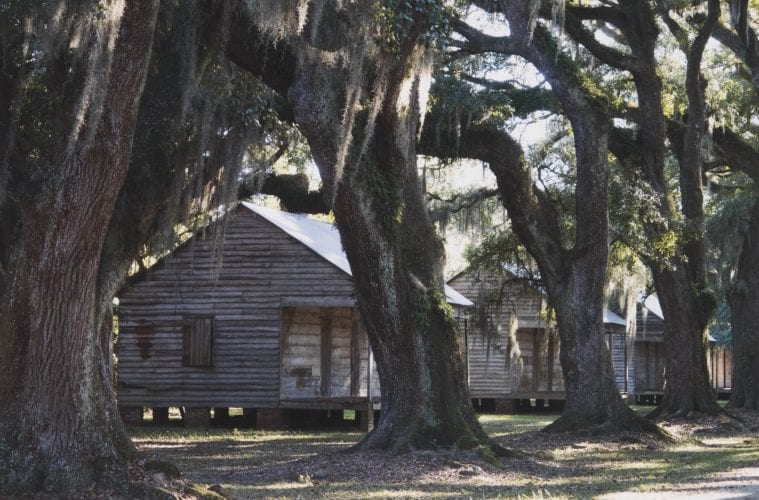 Review: Keris Salmon’s photos conjure the voices of slavery’s past at Arnika Dawkins

Visiting a plantation evokes not just what we know about life there, but what we think we know, the things we learn and the things we wonder. This space between the known and the unknown — the truth and the storied — is what comes to mind at Keris Salmon’s We Have Made These Lands What They Are, on view at Arnika Dawkins Gallery through April 6. To experience the 24 digital prints is to walk directly into a collision of the past and the present. Salmon presents these images of plantations, not through the lens of nostalgia, but as an interrogation of the legacy of American slavery.

Through her work, Salmon effectively subverts the notion that plantations represent an era of the past. As the title suggests, the social formalities of plantation life are still deeply embedded in the contemporary moment. For Keris in particular, these things hit home directly as a black woman married to a white man who is a descendant of the family that owned the largest tobacco plantation in the antebellum South. The project is Keris’ own interrogation of how she and her children are positioned within that legacy. Salmon crafts narrative by pairing her photographs of plantation scenes with textual fragments taken from primary sources such as archival material, letters and newspapers. The fusion invokes the voices of the black people who were enslaved and the white people who took advantage of their bondage. Together, they conjure a human subject missing from the photographic frame. But because the source of each textual fragment and the voice of each speaker are unknown to the viewer, Salmon encourages a search through one’s own canon of historical knowledge to decipher whose voice is being rendered, playing with the ways in which race is typically signified. As the show’s title suggests, Salmon invokes the human subject through the physical markers of landscape and built structures: doors, windows, banisters, trees, statues and wildlife.

Take, for example, SUGAR (2016). The image seems to have been shot from an interior looking out, as the tree at its center is captured at an angle in a doorframe. The caption is an excerpt from an eyewitness report about a recently purchased girl of 14 confessing to mixing poison with sugar in order to kill “the cook woman.” (The words are actually those of Rachel O’Connor, mistress of the Evergreen Plantation in Louisiana, who was writing to family members in the 1830s and 1840s). Paired with this text, the tree seems almost to embody the young girl as she peers from around house corners in her plotting. The viewer is apt to wonder more about the girl’s story, to feel some sort of empathy for her, despite not knowing why she tried to kill the cook (who was likely a black woman, as well). Nevertheless, Salmon’s work charges us to more keenly interrogate the narratives she builds and to not take the text for face value. From what we know about survival tactics under slavery, the young girl could have lied about wanting to poison the cook in order to receive a lesser punishment than confessing to wanting to kill her white owners.

Most of the photographs capture landscapes and exteriors. As such, the natural world becomes essential in Salmon’s work as symbol. Of these symbols, the tree stands out as the most haunting. ICE WATER (2016) features a white statue of a bare-chested woman, one arm draping her head and the other resting just below her hip. Behind her, a tree stands in her shadow — or shadowing her — with dangling Spanish moss swaying in the wind, making it difficult to decipher where the moss ends and the tree leaves begin. The accompanying text seems to be in the voice of an enslaved woman who is charged with waiting on one of the white women of the household. She says, “I’d ask ‘em if dey would like to stroll out into de garden while Miss Sue was beautifying herself.” The dark presence of the tall tree against the pristine veneer of the posing figurine seems to echo how beauty was reserved for white women, but it was only through denying black women such elevation that this beauty could emerge. Even the moss hanging on the woman’s neck seems to tell how black women were often charged with fabricating and enhancing white women’s physical features. The photographs also respond to period photography documenting black life during slavery. This is most evident in CARGO (2016), in which a large bird is captured from behind as it spreads its wings. In the foreground, the large surface area of sky and cloud makes the bird seem airborne, but the patch of grass in the bottom right corner reveals the image as a reflection of the sky shown on a body of water. At the water’s edge, the bird’s brown feathers shine almost white. The text beneath is taken from a runaway slave notice that appeared in The South Carolina Gazette in 1761 looking for “a middle-sized fellow, of a yellowish complexion, much marked in the face with his country marks.” Salmon’s CARGO is reminiscent of the unforgettable archival image The Scourged Back, a photograph taken by William D. McPherson and his partner Mr. Oliver. Captured during a medical examination in April of 1863, McPherson and Oliver’s photograph shows a former slave named Gordon who escaped slavery to join the Union Army during the Civil War. With Gordon’s back turned to the camera and his face looking off to the left in seeming indifference, viewers see the markings and bruises endured from a brutal whipping on Christmas Day months prior. The bird symbolizes how the enslaved took flight in fleeing their bondage, making themselves anew if successful in that attempt.

The weightiest of the pieces hint toward the intimacy of familial belonging. I CANNOT (2016) features a row of slave cabins sitting behind Spanish moss-covered trees. The shot seems to be of an entrance to a plantation, where slaveowners typically placed slave quarters in order to flaunt their wealth based on how much human capital they owned. The photo is picturesque, with the moss hanging hauntingly from the trees, all of it as if caught on an ordinary day, sans the people who lived there. Again, Salmon uses the words from one of Rachel O’Connor’s letters: “I cannot part from my Negroes. I have raised all but a few and I love them. They have their faults and I have mine. All living has faults. None is clear of sin.” The text confronts the close but mediated relationships many owners maintained with those they owned. Salmon juxtaposes her photo with O’Connor’s words, creating an intense contrast between the supposed love that white owners had for the black people they owned and the harsh living conditions they subjected them to.

Salmon’s images and the texts work together to form a type of poetry. Even sitting alone with these photographs, you are not alone: the narratives of each piece speak to one another. They concern us, and they don’t — we are interpolated nonetheless. Viewers walk away with recognition of how difficult it is, in the South and elsewhere, to live amidst the historical memories that some recognize as violent and others experience as nostalgia. It’s safe to say that this is history’s charge — to make us critical of the past as much as we are reflective of it. It’s for this reason that the “we” of Salmon’s title is pointed at no one in particular but calls us all to ruminate on how we move about history and what we are doing with that reflection.