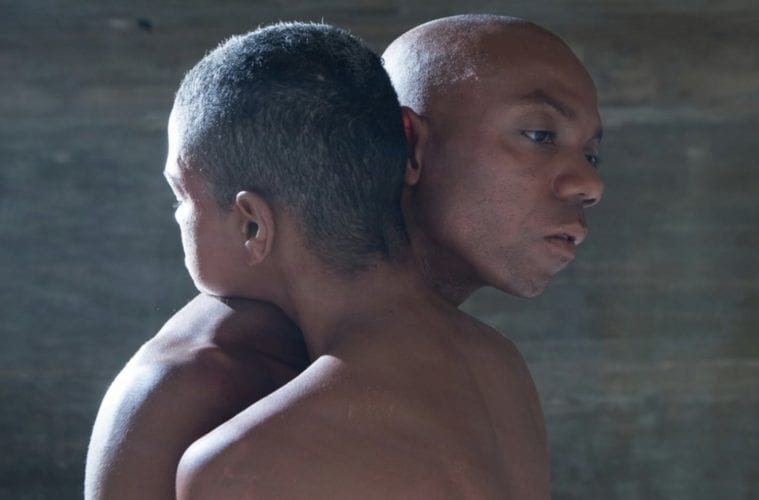 Tanz Farm, a collaboration between glo and The Goat Farm Arts Center, returns with BLACK VELVET: Architectures and Archetypes, as part of Tanz Farm’s ongoing performance series. For this iteration, creators and performers Shamel Pitts and Mirelle Martins will install their internationally acclaimed performance art piece backstage at Atlanta Symphony Hall March 27–29. In this work, each dancer radiates both male and female energy, as the two move inside a choreographed universe that exists outside of society’s boxes of race, gender and orientation.

Their partnership began in Brooklyn, back in 2013, when Martins showed up at a Gaga Summer Intensive that Pitts, a former Batsheva Dance Company member, was teaching. “From the first moment our eyes met, we felt a profound connection,” says Pitts. “Black Velvet is a lot about how strangers can become partners, how we see each other and allow our connection to reflect onto others.”

Despite the fact that Martins was a performance artist from Brazil who did not have any experience with dance, while Pitts was a career dance artist from Brooklyn, the two found more similarities than differences as they worked in the studio. Researching the systems that they were a part of, Pitts and Martins used this shared knowledge for a grand reimagining of their existence: a world in which black people are seen, supported and thriving.

“We, as Black artists, are aware of the importance of creating platforms and visibility for Black people, especially Black women in the arts, and in life in general,” says Pitts. “However, Black Velvet is not about race, because race focuses on separation, and we are focusing on our connection.”

Atlanta will be able to experience this profound connection thanks to the curatorial eye of Lauri Stallings, the conceptual artist behind glo. Since 2012, Tanz Farm has been programming ambitious and boundary-pushing work from international artists such as Eiko Otake, Fabien Prioville and Sidra Bell. Audiences can expect to be provoked once again by Black Velvet, a reflective work with movement that juxtaposes strong gestures and delicate moments and celebrates the similarly androgynous appearance of both performers.

Thus far, Pitts and Martins have found a deep confirmation in the reactions from audiences around the world. The tour has taken them from Sao Paulo to Berlin to Tel Aviv to, most recently, New York City. At the Stockholm Fringe Festival, the show won the Audience Choice Award. “It is very moving for us to see and hear from Black women and men who see the work and see the potential of themselves in us,” says Pitts. “So many women and international audiences felt they received something from Black Velvet that they didn’t even know they were missing or that they needed to see.”

The mirror-like images Pitts and Martins embody hold the potential for viewers to connect to something larger than themselves. “I want people to experience something. What that might be is for them to decide,” says Stallings. “Tanz Farm, Black Velvet, all of it is an alternative. We desperately need alternatives, so I keep trying to open up new doors for more radical activity.”

As with all Tanz Farm engagements, Pitts and Martins will join the surrounding events, which includes a free and public movement class March 30 at noon at the glo studio at the Goat Farm, and a free community conversation March 31 at the Warhorse Cafe at 2:30 p.m.