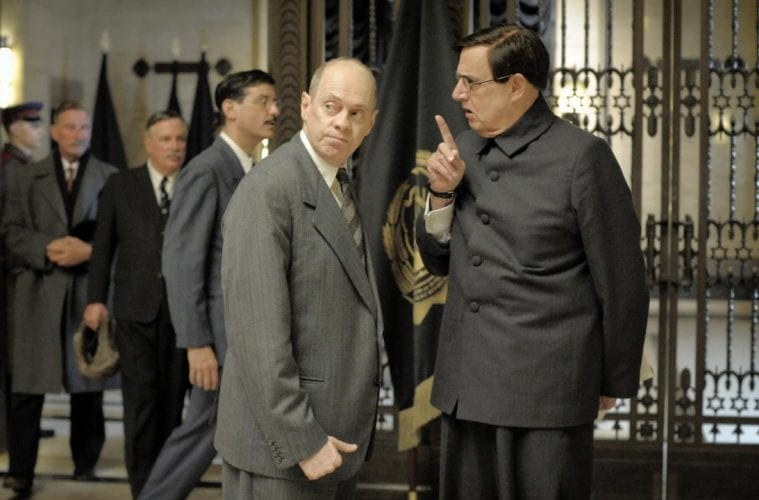 Fans of HBO’s Veep will recognize the elaborately worded insults, the manic pace and the blatant grabs for power while watching creator Armando Iannucci’s new comedy. What distinguishes The Death of Stalin, though, is its sudden, bloody murders and beatings treated as black comedy, and its breathtaking disregard for the reverent approach to history that we’re used to seeing onscreen. There’s a reason Vladimir Putin banned the film from being shown in Russia.

If that’s not a ringing endorsement, I don’t know what is. I’ll add my own anyway: Death is the liveliest movie about brutal oppression I’ve seen in a while (since 1995’s Underground, anyway); it’s funny as hell — then suddenly chilling — and it’s more audacious than just about anything else playing now.

The movie’s about — well, that title’s a big spoiler. But we first meet Josef Stalin (Adrian McLoughlin) in 1953, still breathing through the last few hours of his life. At dinner, he presides over underlings who rattle off jokes, retell old war stories and do everything but spin plates to keep their dictator amused. It’s a scene of sweaty obsequiousness that rivals that White House meeting where President Trump sat listening as all the cabinet members took turns praising his exalted leadership.

The comic exertions of Stalin’s men are somewhat undercut on realizing their official positions in the Soviet government. Onscreen titles identify first secretary of the Moscow Committee, Khrushchev (Steve Buscemi), and head of the secret police squad NKDV, Beria (Simon Russell Beale) as they butt bellies for the entertainment of their leader. Also in the room are foreign secretary Molotov (Michael Palin) and Stalin’s deputy Malenkov (Jeffrey Tambor). While the others settle in to watch a cowboy movie with Stalin, Beria departs with his newly revised list of who needs to be imprisoned, executed or disappeared by the NKDV.

“I’m exhausted,” Malenkov sighs. “I can’t remember who’s alive and who isn’t.” That includes a huge number of the nation’s doctors, so persecuted over the years that there’s only a handful to be rounded up for help after Stalin suddenly collapses.

The oppressive status quo gets a big shakeup when, yes, Stalin has ceased to be. The standing cabinet members begin the serious business of trying to out jockey each other for top position. “Shit, the race has started,” Khrushchev murmurs — and here, it’s a literal race as he, Beria, Malenkov and the others sprint toward Stalin’s daughter, Svetlana (Andrea Riseborough), jostling for favor when she arrives at her father’s Dachau.

Dithering and easily distracted, Svetlana is soon joined by her spoiled, unstable brother Vasily (Rupert Friend), trying to cause problems but usually too drunk to succeed. If nothing else, in addition to making you laugh and wince, The Death of Stalin will have you scouring Wikipedia after you see it as you ask yourself, Did this or that crazy thing really happen? (The general answer: yes.)

Among an enormously talented cast, Buscemi delivers his patented slow-burn and sputter, well aided by Tambor’s Malenkov, initially a bumbler who becomes monstrous when he tastes a little power. Best of all may be British stage actor Beale as a stealthy, murderous functionary who slowly starts to wonder if he’s being outmaneuvered by colleagues he always viewed as nincompoops.

The fatal slapstick of The Death of Stalin transforms from being funny to feeling a little bit terrifying — a reminder that enormous shifts in history are often caused by small-minded, petty, ego-driven cowards and their enablers. “I will bury you in history, you hear me, you fat fucker,” one comrade shouts at the corpse of another.

As if to underscore that threat, the jaunty end credits are illustrated by photos of the various lead characters, their faces being deleted or crossed out followed by the same happening to the images of countless, unfamous Soviet citizens.

Also opening, Foxtrot is a fascinating, sometimes patience-taxing drama that toys with the notions of tragedy and fate in contemporary Israel. Writer-director Samuel Maoz (Lebanon) divides his film into three, interrelated parts.

In the first, a point-of-view shot through the windshield of a tank as it drives along a rutted desert road changes, with a shock cut, to a finger buzzing the doorbell of a Tel Aviv apartment. A woman, Daphna (Sarah Adler), opens the door — and faints. That’s because the visitors are representatives of the Israeli Army. Daphna’s son Jonathan is a soldier monitoring a checkpoint in the desert, so uniforms at the door can mean only one thing. Yes, they tell her and Jonathan’s father, Michael (Lior Ashkenazi): Jonathan has been killed.

While Daphna lies sedated in the bedroom, the camera maintains an almost clinical focus on Michael, a handsome and fiercely self-controlled architect. The apartment’s gorgeously chilly décor acts as a sort of physical manifestation of his persona, and the camera moves through it with the precision of a Stanley Kubrick film. 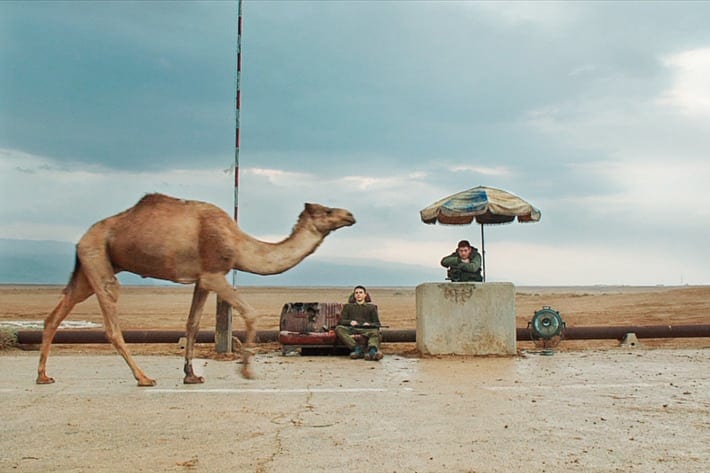 It’s a rigorous, fascinating deep dive into the immediate, numbed aftermath of sudden loss, injected with very dry comedy as the military reps try to be helpful. They insist that Michael drink a glass of water every hour on the hour. And when the funeral advisor explains to Michael in precise detail the rituals to be observed during Jonathan’s memorial service (“The rabbi will tear your shirt – a small rip near your heart”), the movie tips toward absurdist comedy.

But here’s a spoiler, and a necessary one if you want to keep reading (and one that won’t actually ruin the movie for you): Jonathan, it turns out, is actually alive. The dead soldier just had a similar name. So the parents’ grief instead transforms into giddy relief for Daphna and screaming rage for Michael, who demands redress from the army.

The film here shifts to its second part, set at the miserable, muddy desert outpost where Jonathan (Yonaton Shiray) and a handful of other soldiers (in a squadron known as Foxtrot) monitor traffic at a security checkpoint. The “traffic” here mainly consists of the occasional camel and more rarely a handful of nervous travelers. Bored beyond distraction, Jonathan and his pals often subject these drivers and their passengers to a slow sort of torment as they vet their IDs, even forcing them to step out of the vehicle and stand for long minutes in a drenching rain. Otherwise, their time is taken with cooking cans of nasty tinned meat over a gas range, or measuring how much farther the corrugated container that serves as their dorm has sunk into the mud.

Director Maoz is almost too successful here at conveying the grunts’ tedium. This middle section may remind you of The Band’s Visit, in which, famously, nothing much happens. By comparison to this passage of Foxtrot, Visit seems like a frantic plot machine. Here’s when you’ll need to be very, very patient.

Patience is worth it as the movie returns to that Tel Aviv apartment for its third act, a hushed and emotionally delicate sequence between Michael and Daphna, with a cameo by their other child, daughter Alma (Shira Haas). Here the other meaning of foxtrot is invoked — the box-step dance that keeps dancers stuck in the same place on the floor, but at least clasped together. It’s a lovely conclusion.

Finally, there’s Leaning into the Wind: Andy Goldsworthy. You don’t have to have seen the previous documentary made by director Thomas Riedelsheimer about Goldsworthy, 2001’s Rivers and Tides (I hadn’t). But it might help.

Personally, it took me a while to get on the wavelength of this revisit with the British artist, whose focus is on natural materials and the effects that time, weather and seasons have on them. We watch Goldsworthy crawling gingerly through the wintertime branches of hedges near his Scottish home, or making temporary art out of dust and a beam of sunlight slanting through the roof of a jungle hut. He’s an odd little fella, is your first thought. Soon, though, the film widens as he travels to France, Spain, New England and other places, reacting with their natural environments and creating artworks from the raw materials at hand.

Some of his works are monumental and wrought in stone, others as ephemeral as the wind — like the flower petals Goldsworthy tries to “paint” on a rock ledge, until a breeze gusts them all away. By the documentary’s end, the artist and the filmmaker have drawn you into their own meditative rhythms and philosophy. Like Foxtrot’s central portion, it’s worth your time.