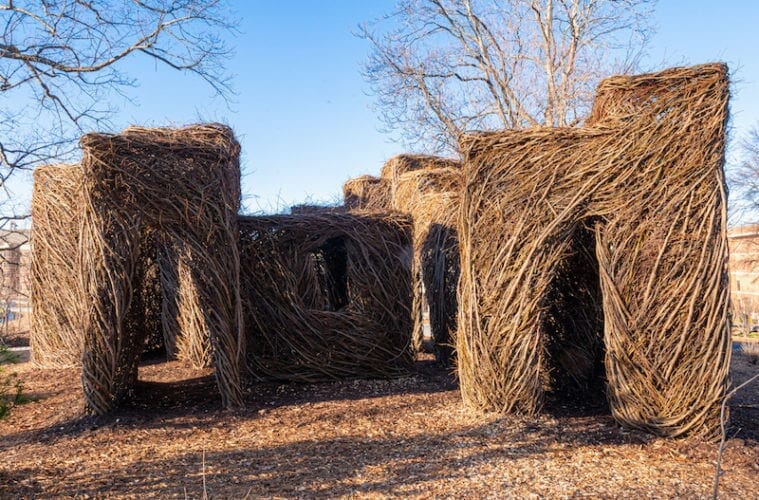 ArtsATL staffFebruary 8, 2021
Art+DesignArt+Design - Featured
Acclaimed regenerative design artist Patrick Dougherty spent most of his January at Georgia Tech creating a 14-foot-tall sculpture of sweet-gum tree saplings. They were gathered in the fall from Serenbe, the new-urbanism-style community in Chattahoochee Hills, and Piedmont Park. 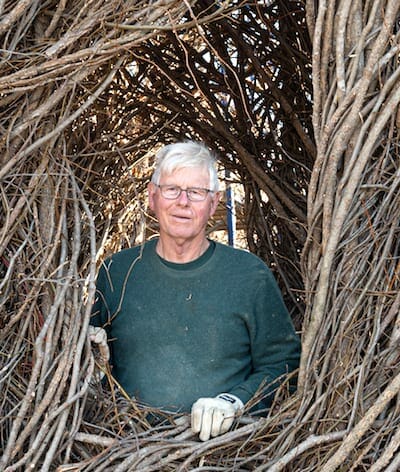 Patrick Dougherty has built more than 300 large sculptures in the past 30-plus years.

The piece, titled Chip Off the Ole Block, can be seen outdoors in the Eco-Commons area, 80-acres of green space next to Tech’s Kendeda Building for Innovative Sustainable Design. It’s intended to preserve the natural topography and link smart infrastructure across the  campus. The sculpture has four elements, measures 50 feet by 30 feet and is sited on a hilltop.

The outdoor sculpture is open to anyone who wants to see it up close, and can be seen by passing traffic on Ferst Street N.W. (between Hemphill Avenue and State Street).

“I thought of shrubbery parading as architecture,” says Dougherty, who lives in Chapel Hill, North Carolina, “and wanted to reflect the cityscape of Atlanta with its stair-stepping skyline.”

The work was completed in about three weeks by Dougherty, son Sam and some 150 student and community volunteers. It will stand until it naturally returns to the earth. He’s done similar pieces throughout the United States and in Belgium, Japan and Scotland.

Contributor and photographer Virginie Kippelen documented the project for ArtsATL. 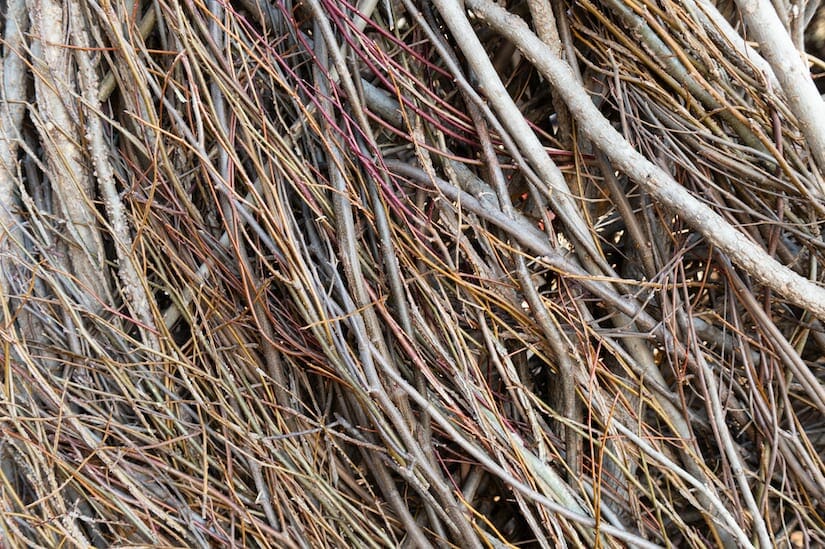 It takes truckloads of saplings to make one of Dougherty’s sculptures. 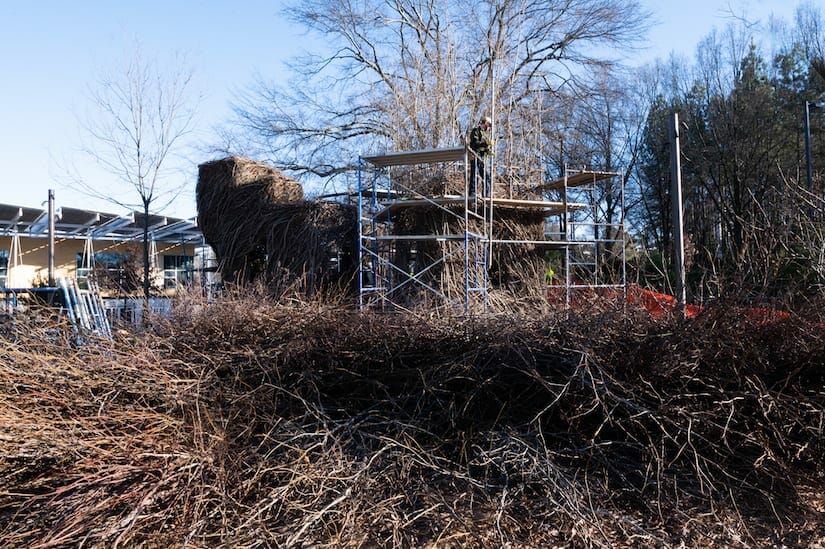 The sculptor began by visiting the Tech site in late 2020, doing word associations and drawing doodles of his ideas. In the background, the Kendeda building. 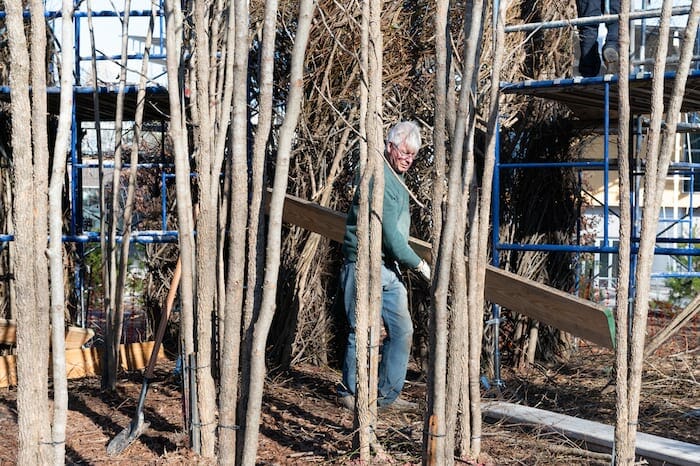 Week 2 of the build. Dougherty moves scaffolding that offers access to the highest parts of his piece. 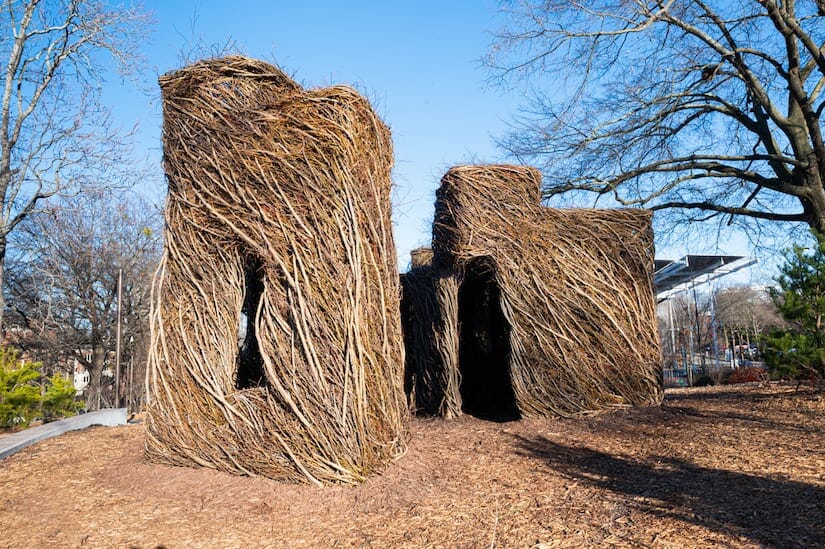 Nearing completion on a sunny day. 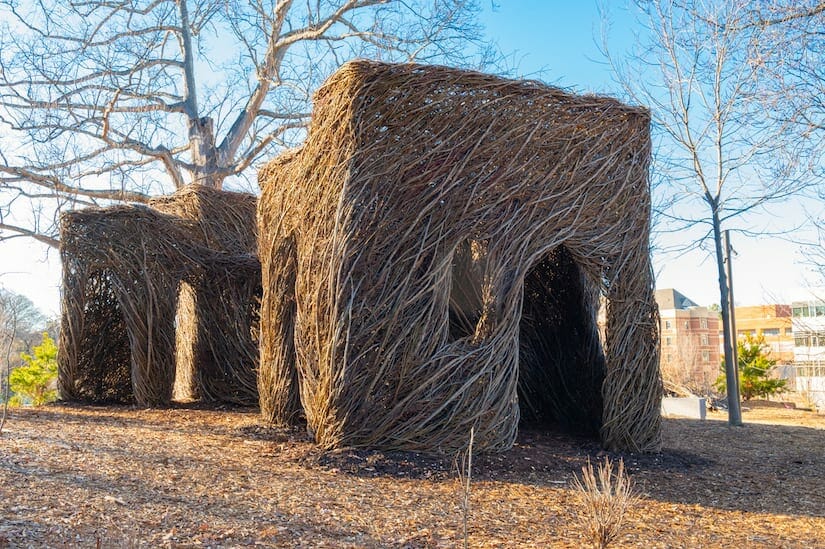 Finished. “Chip Off the Ole Block” will stand until until it naturally returns to the earth.