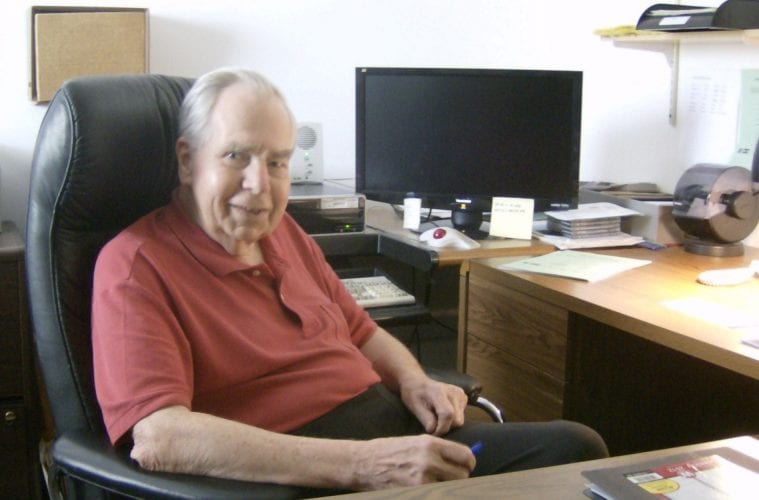 From “Officer Don” to maestro of “Big Band Jump,” Don Kennedy stays in the swing 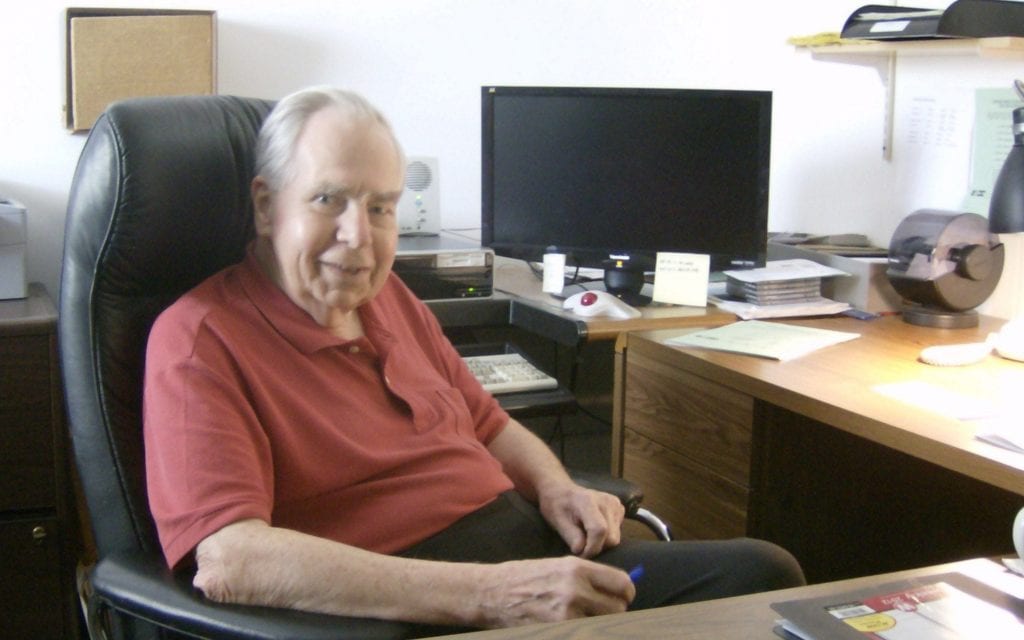 Don Kennedy’s voice is unmistakable. Its cheerful warmth is an aural invitation. He calls out and waves from the end of the narrow hallway. His tiny Buckhead studio is entirely unpretentious and relaxed, but work is clearly being done. It’s here that the 82-year-old Atlanta broadcasting legend produces and hosts two syndicated radio programs devoted to his first love, the music of big bands: “Big Band Jump” and its less formal, unscripted sister program, “The Don Kennedy Show.”

If you’ve already “got your boots on,” no explanation is needed. But if you have no idea what a “big band” is, here’s the skinny. A basic big band is made up of 17 musicians: four trumpets, four trombones and five saxophones who double on other woodwinds, all supported by a four-piece rhythm section, most often drums, upright bass, piano and guitar. Add the sweet icing of vocalists to that cake and, Jack, you’re ready to swing.

“Swing” is the operative word for “Big Band Jump.” The height of popularity for big bands was also known as the Swing Era. A uniquely American antidote to the Great Depression, it reached its apex between 1935 and the end of World War II, giving way to other styles by the 1950s.

While “Big Band Jump” focuses on the Swing Era, “The Don Kennedy Show” includes more vocals and some contemporary swing artists such as Harry Connick Jr., Michael Bublé and Diana Krall. Kennedy is emphatic that programming for both is based on style, not the calendar. “I tell everybody I cut out about 1948, as far as art and music is concerned,” he says. “But the fact of the matter is there are more big bands today in the United States than there were in the Big Band Era.”

But times, of course, have changed. The big-band ballrooms have closed and the bands have greater difficulty reaching a wide audience. That includes radio, as the genre’s original audience has aged. “Our hope with ‘Big Band Jump’ was that we could develop a younger generation of listeners and maintain what we’re doing,” Kennedy explains.

“Big Band Jump” has a wide, national reach. It now airs on 103 radio stations, not counting public broadcasting and Internet streams. The number of stations, however, has declined as fewer program an “adult standards” format. In Atlanta, “Big Band Jump” airs on Georgia State University’s WRAS (88.5 FM), where it was born as “One O’Clock Jump” in 1982.

The telephone rings, and Kennedy takes a call from a fan who wants to order a big-band CD that he sells through his shows. He apologizes for the brief, but important, interruption — CD sales directly support production of “Big Band Jump” and “The Don Kennedy Show.”

He stays busy. This was the only day he could easily meet with ArtsATL, because he was booked solid, including a television shoot the next day. “To call it acting would be an insult to the acting profession,” Kennedy jokes. “But when they want an old guy to be silly on camera, I can do that, because I enjoy being on camera and I’m used to it from my previous experience at WSB doing the Officer Don thing, which is what everybody remembers.” 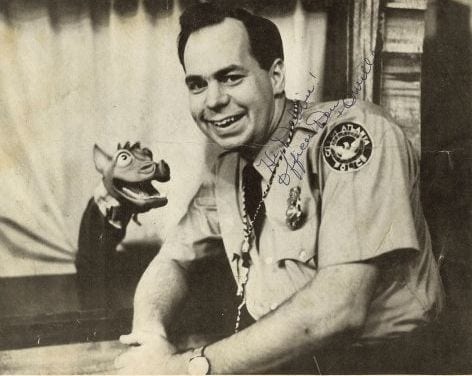 Kennedy as a generation of children knew him, as "Officer Don" on WSB-TV’s “The Popeye Club,” with his foil Orvil the Dragon. "I don’t find it disturbing; it’s flattering that they remember," he says now. "But they’re just so focused on what, in the end, is a minor part of my career.”

Kennedy is offhand about his renown as “Officer Don” on WSB-TV’s daily children’s show “The Popeye Club” in the late 1950s and early ’60s, and doesn’t seem to enjoy talking to reporters about it. “That’s what they remember,” he says. “It’s all Officer Don. I don’t find it disturbing; it’s flattering that they remember. But they’re just so focused on what, in the end, is a minor part of my career.”

Perhaps so. But for a generation of Atlanta children, Kennedy was their version of Mister Rogers: a kindly police officer who bantered with his hand-puppet foil, Orvil the Dragon, and taught kids lessons about life. The show was broadcast live in front of an audience of children, and it aired every afternoon after school. It featured Popeye cartoons and games such as “Ooey Gooey,” in which blindfolded kids selected from a group of brown paper bags; most contained prizes, but one was always filled with a slimy substance known only as “ooey gooey.” The show’s foundation, however, was the folksy likeability of Kennedy and the on-screen chemistry between Officer Don and Orvil.

“The Popeye Club” had the largest audience of any locally produced children’s television program in the nation and is clearly Kennedy’s biggest local claim to fame. But he’s also one of the city’s pioneering broadcasters.

Born in 1930, Kennedy’s initial radio experience came at age 13 when he set up a half-watt homemade transmitter in his parents’ basement in Beaver, Pennsylvania, and began broadcasting his own hour-long program every evening. Four years later, he landed a paying weekend radio gig in a nearby town. Then the Korean War called him to service in the Army, as the radio studio manager of a psychological warfare unit. After the war, he came to Atlanta at the urging of an Army buddy.

“My wife and I arrived in Atlanta on Valentine’s Day in 1955,” he recalls. Living on his mustering-out pay, he was turned down by multiple radio stations before finally being hired late in the month by what was then WBGE-AM.

As fate would have it, less than a month later, Kennedy got a call from WSB radio, Atlanta’s oldest and largest radio station, offering him a job. Feeling committed to his new, hard-won job at WBGE, he reluctantly turned WSB down. Then he got a second call, this time from WSB-TV, offering him a position as a booth announcer. Heeding his father’s advice, Kennedy took the job and started on April Fool’s Day 1955, having never been inside a television station in his life. His father’s advice proved providential: WBGE was sold shortly afterward and its entire staff fired.

The next year, Kennedy became WSB-TV’s 11 p.m. news anchor, as well as the host of what ultimately became “The Popeye Club.” But he didn’t stop there. Among other things, Kennedy was, briefly, an occasional contributor to NBC’s iconic syndicated radio program “Monitor.” He also founded WKLS-FM, which went on the air late in 1960, when commercial FM stations were considered a risky investment. The “KLS” was the initials of Kennedy and his two partners.

“FM was not very popular then,” Kennedy notes. “All the engineers in town said that ‘WKLS’ stood for ‘Watch Kennedy Lose his Shirt.’ That was kind of a joke in town.” He worked hard, doing all the voice-tracking himself during the first years. In 1970, he and his partners sold WKLS at a profit. In 1974 it became known as “96 Rock,” a branding it maintained for 32 years. 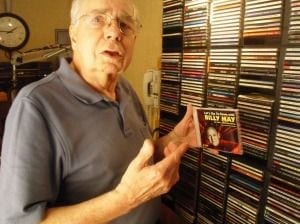 In 1976 Kennedy took another big risk: the resurrection of UHF television Channel 36, WATL-TV, as an independent, non-network station. That summer, 17-year-old Jeff Walker began to watch and was intrigued because there was local content. That fall, Walker entered Georgia State University as a communications major and began to work at WRAS. A few months later he also started hanging out at the WATL studios, where he met Kennedy. The next year, Walker began to run cameras and do voice work.

Eventually fate came knocking again. Walker became the student program director at WRAS in 1981, then general manager in 1982. He remembered Kennedy’s love of big-band music from working at Channel 36, and, because none of the students working at WRAS knew much about that style of music, Walker asked Kennedy to do a live, one-hour big-band show every week. They called it “One O’Clock Jump,” after the Count Basie tune that was almost obligatory rep for top swing bands. It aired, of course, at one o’clock in the afternoon, on Sundays. “I actually went down there and did it with my records,” recalls Kennedy.

After a few years on the air, he received a postcard from a fan suggesting that he syndicate the show. “It [had] never occurred to me,” he says. “I didn’t know how to syndicate, so I kind of learned on my own.” In 1986, syndication began under the show’s new name, “Big Band Jump,” so radio stations could play it in any time slot.

WRAS still broadcasts “Big Band Jump” on Sundays, but at 11 a.m. Walker, now the station’s adviser and operations manager, says it’s still one of the station’s top shows and the only syndicated show it broadcasts.

Kennedy has won two local Emmy Awards and was inducted into the Georgia Association of Broadcasters Hall of Fame in 2001 and the Georgia Radio Hall of Fame in 2007. He is occasionally heard and seen on the Cartoon Network, in addition to other work. He also continues a long practice of reading for the Georgia Radio Reading Service for the blind every Thursday afternoon. “I read books,” he says. “Mostly mystery adventure stuff.”

Most telling is that his radio shows continue to be independently produced and syndicated — an unlikely scenario in a broadcasting world now dominated by corporate conglomerates — even as the nature of broadcasting itself continues to change rapidly. The most likely place where new, young audiences can catch the swing is not radio but the Internet, where both “Big Band Jump” and “The Don Kennedy Show” can be heard on demand at www.bigbandjump.com. Kennedy, though, like many of his generation, has an innate mistrust of computers. “I own three,” he says, “but I don’t accept them.”

Perhaps they’re simply too impersonal for the heart and soul of someone to whom high romance still means Glenn Miller and slow dancing.