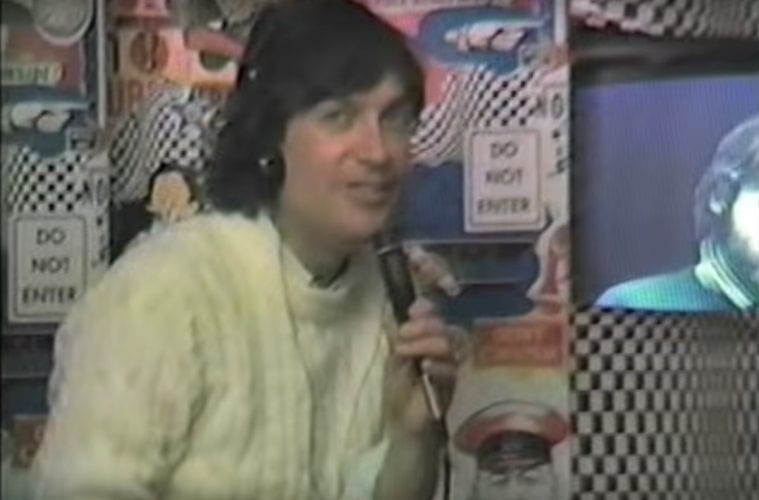 Media pioneer, artist and icon of Southern queer history Dick Richards passed away on September 13 at the age of 72 after battling leukemia since 2005. Although his name may be unfamiliar to some, his influence and legacy are profound.

Richards produced the weekly American Music Show on Atlanta public access cable television for more than two decades, making it the longest running show of its kind in the world. The show, along with his Funtone USA record label, both of which Richards ran out of his Inman Park bungalow, helped launch the careers of many entertainers, several of whom went on to achieve national and even international celebrity. Along the way, Richards created the most thorough video archive of queer life in the South. The tagline of his DIY production company, “If it’s not fun, don’t do it,” also rang true as his personal philosophy. He lived it.

Richards’ public access show The American Music Show (TAMS) ran on Atlanta’s People TV from 1981 to 2005. At the time, public access television, which allowed residents to broadcast their own video creations, was a bastion for new, experimental and wide-ranging voices (in the 1980s and 1990s, it was akin to an early version of YouTube). TAMS showcased Atlanta in a way it had never been seen before.

The show, which Dick Richards produced on a weekly budget of $5, took viewers to underground drag performances, to tacky psychedelic trailer parks with bizarre singing sisters, on tours of gay cruising trails in Piedmont Park and to Forsyth County where a 24-year-old RuPaul participated in protests against the Ku Klux Klan. Whether filmed on his outrageous living room set (as it often was) or on location, TAMS took a look at Atlanta life that was not written about in the newspapers, and Richards featured personalities who would be unlikely to appear on conventional local news. But these people and their stories were a very real part of the Atlanta community, and Richards was dedicated to capturing and broadcasting their voices.

RuPaul watched the show devotedly as a teenager growing up in Atlanta and eventually wrote a letter to Richards asking to be featured. Richards invited RuPaul on, becoming the first person to ever televise RuPaul. In his 1996 autobiography Lettin it All Hang Out, RuPaul devotes a chapter to describing his many experiences on the show and citing Richards and his cadre for helping to shape his own aesthetic and set him on his path to stardom. Richards also recorded and released RuPaul’s first album Sex Freak on the Funtone label.

In addition to producing his own archive of Atlanta-centric queer video footage, currently housed at Emory University’s Stuart A. Rose Manuscript, Archives and Rare Book Library, Richards ensured the preservation of a similar archive from New York City. Richards grew up in a small town in South Carolina next door to another little gay boy named Nelson Sullivan. Whereas Richards moved to Atlanta, Sullivan moved to New York and became entrenched in the 1980s underground gay and art scenes there. Sullivan almost always carried a video camera with him everywhere, capturing the rise (and fall) of many artists and influencers including Keith Haring, John Sex, Tom Rubnitz, Michael Alig and many others. When Sullivan died of a heart attack at age 41 in 1989 (he had just quit his full-time job three days before to start a public access show of his own with his recordings), Richards drove up from Atlanta and saved all of the video tapes. In collaboration with New York University, Richards made sure the tapes were properly preserved, and he also made them available on YouTube through the Five Ninth Avenue Project.

Richards is survived by his partner and husband of many years, David Goldman.

Among the many things that makes Richards’ work so compelling is the fact that he was publicly celebrating queer culture in a place and time when doing so could get you fired, attacked or arrested. And he did this work nonstop for more than two decades. Richards also proved that you don’t have to be the one in the spotlight to make art that will change the world: you simply have to make the art with dedication and use your work to lift up those around you. He stayed true to the motto, “If It’s Not Fun, Don’t Do It.” By making art with such joy and exuberance, he inspired countless others to pursue their own work.

As a young, Southern gay artist, this writer was one of the many people he inspired. Last year I did two art projects wherein I used footage from The American Music Show. One of them was a feature-length documentary about The American Music Show made for Out On Film, comprised solely of clips from the original public access episodes. As part of that project, I produced a ‘zine similar to the ones Richards used to photocopy and staple together in his home. In it, I included an interview about his work. This was his last public interview, and I think it nicely conveys a sense of who he was. I hope you enjoy it.

Matthew Terrell: Please give your memoir in exactly six words.

Dick Richards: Never fit in. Not able to.

Terrell: What does Atlanta mean for you?

Richards: Atlanta, to me, meant living in a big city with the feel of a small town, only you could get away with more because everybody didn’t know your business. What I liked best was the attitude that everybody could get along if we moved beyond old-fashioned differences.

Terrell: What motivated you to make The American Music Show for so many years?

Richards: One night at a party in Midtown, James Bond asked me if I wanted to revive our old radio program and put it on public access TV. James was on the Atlanta City Council at that time and was instrumental in getting Atlanta a very strong public access commitment from Cable America which had won the right to be Atlanta’s cable TV provider. James and I had done a kind of crazy radio program on WRFG for a while until we got thrown off for playing a Donna Summer record. We never could learn how to work the volume controls or cue up a record properly, but playing a disco song was beyond the pale. Just before that party, James had bought a Panasonic camera and VHS recorder, which were brand new products in the department stores and easy to use. James got his girlfriend at the time, Potsy Duncan, to help us out and run the camera. She was our semi-producer and director. We then got together in James’ bedroom at his mother’s home and did our first program and had a really good time, so we kept on doing it. I really liked being on TV. Terrell: What do you miss about Atlanta that has changed?

Richards: I miss how easy it was to get around. Back in the olden days, it was quicker to visit friends in different parts of town or go out to a nightclub. Now, there are so many cars and so many traffic calming measures that a trip takes way longer, and the ride is bumpy, too. We really had it good back in the day when the suburbs were the neighborhoods of choice for families.

Terrell: Describe the ways queer Atlanta culture has changed during your lifetime, and what do you think about the ways it has changed?

Richards: Today, it’s like going to Thanksgiving dinner with your relatives. You never know what you might say that will send someone flying off the handle, so I’ll keep quiet and talk about the weather. No, wait, that’s too controversial. But I will go out on a limb and recommend a book that I recently enjoyed. It’s My Life, My Love, My Legacy by Coretta Scott King, and it’s about her experiences with nonviolence and engagement. Reading it was inspiring for me.

Terrell: When you see RuPaul today, what do you think about?

Richards: I like to look at the Drudge Report on the internet every day because Matt Drudge writes the best headlines; and, interestingly, Matt Drudge seems to have a big crush on RuPaul. He has RuPaul’s picture up there often. So I think, “What if Matt Drudge and RuPaul got married? What a fun power couple that would be.”

Terrell: Which queer artists do you have your eye on today?

Richards: We live out on the fringes of society with no cable mainly because living is so much better with over-the-air TV. I mainly like old 70s and 80s movies because the hairstyles are so much fun and we listen to all of our music on Roku, which doesn’t have a crawl saying who’s playing. I’m sure that there are plenty of neat queer artists, but it’s hard to find out about them as far out of the mainstream as we are. I hope to find out about them some day.

Terrell: Describe a turning point you had in your life related to TAMS. Who or what caused this change, and how did you become a different person?

Richards: That would be back in 1972 when I went to work as a full-time volunteer for the George McGovern for President Campaign. I am a conscientious objector and do not like war, and the Vietnam War was raging then.  RuPaul said that when he first watched The American Music Show he knew he had found his tribe. Well, I found my tribe working in the McGovern Campaign. That’s where I first met James Bond, and later I wound around to an involvement in Maynard Jackson’s first campaign for mayor and met the people I had read about and admired from afar: Julian Bond, John Lewis, Andrew Young and the many others who pushed Atlanta toward its bright future.

Terrell: Looking to the future, what do you want your legacy to be? Where do you hope the queer Atlanta community will be in the next generation?

Richards: My legacy is somehow managing to keep two video collections in tact for 30 years and then, through the effort of others, getting both those collections into important college archives so the people of the future can look at them and say, “What on earth were those people doing?” The American Music Show Collection is being preserved in the MARBL Archives at the Woodruff Library at Emory; the Nelson Sullivan Collection, in the Fales Archives at NYU . . . I know this collection will be a popular reference because I have put many moments from it on YouTube that have gotten over 5 million views so far. I could not have performed this special service for humanity without the help of my better half and case manager David Goldman, who indulges my every whim. As for the future of the gay community, I won’t even suggest because whenever I try to be proactive, it never works out. I just wait to be surprised.