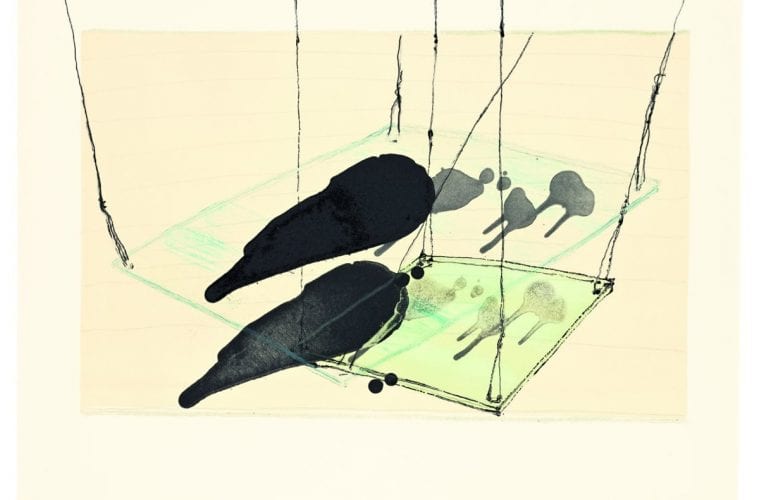 Al Taylor: What Are You Looking At? November 17–March 18. High Museum.
The High Museum unveils the first major museum survey of 20th-century artist Al Taylor, which will span all three levels of the museum’s Anne Cox Chambers Wing. With more than 150 sculptures, drawings and prints drawn from several of the artist’s major series over nearly two decades, the show will seek to reveal the avenues of Taylor’s artistic inquiry and his innovative use of unusual materials such as broomsticks, coffee cans and hula hoops. Although Taylor worked in the studio of Robert Rauschenberg for eight years and achieved a measure of fame in Europe, he never established as much renown in the US as his circle of New York colleagues during his own lifetime. Michael Rooks, the High’s curator of modern and contemporary art, first began planning the exhibition 13 years ago in hopes of reestablishing understanding of Taylor as “an artist’s artist,” a crucial influence on his elders, his contemporaries and successive generations.

More Than Self: Living the Vietnam War. November 11–March 18. Atlanta History Center.
A new exhibition highlights the Atlanta History Center’s collection of 650 Vietnam War-related oral histories. Accompanying the personal accounts are photographs, documents and artifacts that bring to life the realities of war alongside their experiences. Artifacts include an AR-15 rifle, a Viet Cong hand grenade and a Montagnard crossbow crafted by native Vietnam inhabitants. Items such as a nurse’s field jacket, photographs of Red Cross “Donut Dollies” near the front lines and a box of C-rations will provide a glimpse into the daily life of the men and women in country, while images of protestors in Piedmont Park, as well as of a welcome-home sign propped against the front of a serviceman’s home, will provide two contrasting perspectives on the American public’s opposition and support for the war.

Alexandra Zapruder, Twenty-Six Seconds. November 9 at 7:30 p.m. Marcus Jewish Community Center of Atlanta.
In some ways, it’s not surprising that Alexandra Zapruder would choose to become a historian. Her grandfather, unassuming Dallas clothing manufacturer Abraham Zapruder, walked into world history on November 22, 1963, when he showed up at Dealey Plaza to film President John F. Kennedy’s motorcade with a home movie camera. The crucial twenty-six seconds he captured of Kennedy’s assassination rapidly became the most infamous and scrutinized film footage in the world. Zapruder’s granddaughter, National Jewish Book Award-winning historian Alexandra, turns her attention to her grandfather’s film in her latest book, tracking the footage’s torturous journey through history, exploring her grandfather’s unusual role and detailing the effect the film had on her family. Zapruder’s Atlanta appearance is part of 26th annual Marcus Jewish Community Center of Atlanta Book Festival.

Cardboard Piano. November 11–December 3, Actor’s Express.
Actor’s Express presents the Atlanta premiere of young South Korean playwright Hansol Jung’s new work, which had its world premiere at Louisville’s Humana Festival in 2016. The play, set in Northern Uganda in 1999, tells the story of the daughter of an American missionary and a local teenage girl who sneak into a candlelit church to exchange vows in a secret wedding ceremony. When an escalating civil war encroaches on their fragile union, they find they cannot escape its reach. Elizabeth Kramer, theater critic for the Louisville Courier-Journal, called the show “a festival standout” and said the moving play ultimately “suggests a power in facing the damage done and picking up the pieces to inform each step forward.”

The Flying Dutchman. November 4–12. Cobb Energy Performing Arts Centre.
The Atlanta Opera presents a new production of Richard Wagner’s 1843 opera, directed by the company’s artistic director Tomer Zvulun and starring renowned tenor and Atlanta resident Jay Hunter Morris as Erik. Morris initially rocketed to international opera-world fame in 2011 when, as an understudy, he suddenly and unexpectedly had to step into the challenging lead role of the marathon opera Siegfried at the Metropolitan Opera. Fans were won over by his powerful, heartfelt performance and by his down-to-earth, downhome style in interviews. (While many opera singers claim Paris, France, as their hometown, Morris is proud to hail from Paris, Texas.) Music director Arthur Fagen conducts, Wayne Tigges sings the title role and Melody Moore performs as Senta.