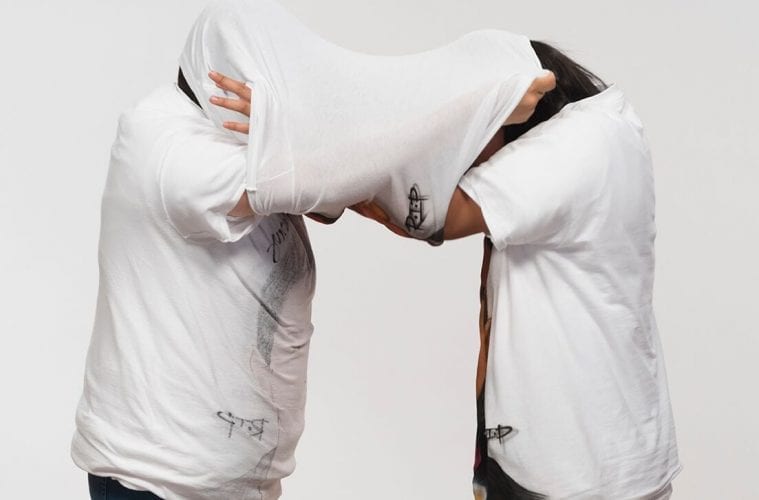 Review: Through the grit and the gauze, “Socially Engaged” cuts through to embodied identities

Finding a group show that has a balanced blend of both variety and cohesion is rare. But curator Brenda Massie has given the Welch Gallery at Georgia State University a compelling and moving exhibition. Whereas group shows often run the risk of being either too disorganized or too restrictive, too confined or too loose, Socially Engaged, on view through November 11, has the advantage of flow and form between each artist’s work. As the name suggests, it provides a powerful undercurrent of dialogue regarding social issues.

Upon entering the gallery, one first encounters Deborah Bright’s Dream Girls series. As both an artist and an academic, Bright utilizes a keen historical and pop-culture eye to illustrate an intriguing fantasy: created between 1989 and 1990, the photographic series has Bright’s own image superimposed onto stills from classic films like Rebel Without a Cause and Breakfast at Tiffany’s. With her short hair and dandy apparel, she reimagines herself partaking in the Hollywood cinematic narrative as a gentleman character, recontextualizing a media history that omitted –and even sought to erase — gender-queer perspectives. Another piece by Bright portrays her mastectomy. The body as an owned, though sometimes alien, entity is a recurrent theme in Socially Engaged.

Pixy Liao, born and raised in China and now living in Brooklyn, expresses a similar sense of embodiment in her playful Experimental Relationships series featuring herself and her younger Japanese male partner. Liao’s photographs use physical spaces to frame individuals, at times partially nude, in contrasting and sometimes switched gender roles, sometimes obscured by corners or curtains, always depicted in bold saturation of candy-color and slight overexposure. 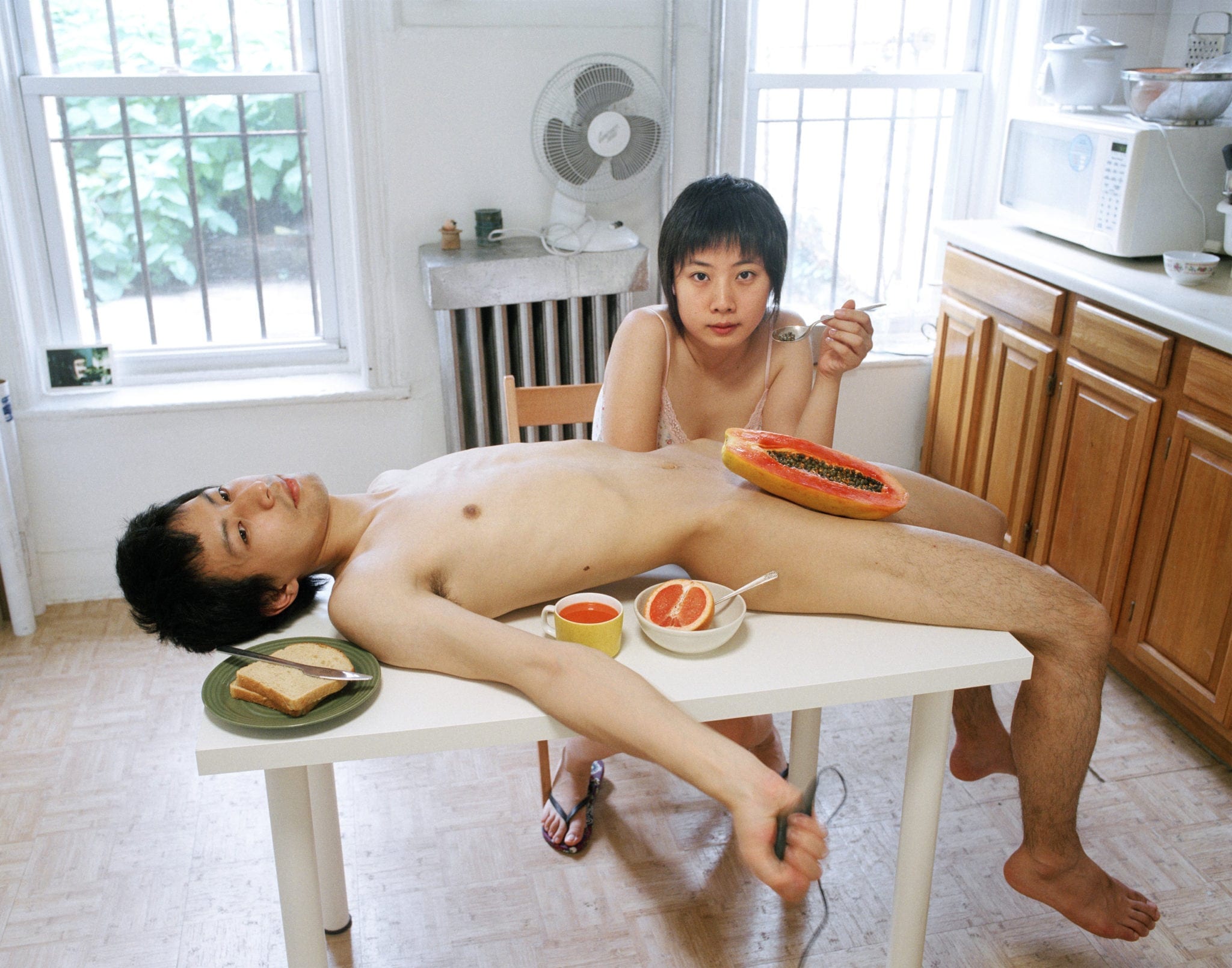 Pixy Liao’s Start Your Day with a Good Breakfast Together. (Courtesy of the artist.)

New York-based artist Marilyn Minter’s eight-minute film Smash slow-motions silver-painted feet in heavily bejeweled platform stilettos in a storm of chrome liquid eventually kicking the glass of an unseen barrier between the camera and performer. Her work suggests the fantastical modern femme undone and uncontained; her photorealistic paintings — one large print is included in the exhibition — form under an ethereal film. A mysterious calibrator of destruction and celebration, Minter’s monstrously goddess-like aesthetic focuses on the socially viewed feminine, doused in glitter, sweat, spit and lipstick.

Three selected photographs from LaToya Ruby Frazier’s The Notion of Family are a juxtaposition to the gritty but gauzy work of Minter. Having captured her hometown and neighbors in Braddock, Pennsylvania, since the age of 16, Frazier typically gives visibility to the socioeconomic effects of gentrification on disadvantaged communities, particularly Black Americans. What’s particularly striking about Frazier’s black-and-white photography is that it doesn’t pinpoint a time frame of now or then, past or present, yet the same issues clearly reemerge decade after decade. However, the three pieces included in the exhibition — two with her mother and one topless self-portrait — are more intimate, personal and, above all, unrehearsed depictions of family life and identity. Alongside Christina Price Washington’s abstraction in breadcrumbs, glass and splashing water, Frazier offers a short film in which she deconstructs a pair of jeans in front of a Levi’s ad, a thoroughly resonant act because the mega-corporation used images of Frazier’s struggling hometown as an evocatively rough, workaday backdrop for its advertising campaigns.

Cheryl Pope, who is a renowned installation artist focusing on violence and sports, used a wearable cop camera to film Portrait of a Young Man. Another film titled One of Many, One depicts a heartbreaking exchange of loss due to gun violence, illustrated by youths wearing and exchanging memorial t-shirts as a shared experience. The videography of Minter, Frazier, Washington and Pope discomforts by confronting viewers through disconcerting metaphorical visual images rather than contentious and contestable language. 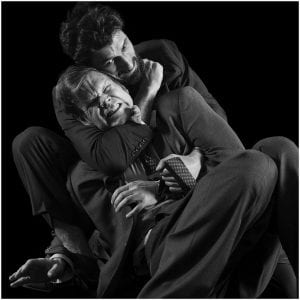 Kerry Skarbakka’s Billy Jack No.7 from the series Red, White, Black and Blue; The Revenge of Billy Jack. (Courtesy of the artist.)

Kerry Skarbakka, the only male photographer included in the exhibition, explores social violence with a piece from his Red, White, Black and Blue series. Skarbakka’s views on the shortcomings of toxic masculinity are intuitive: “In a world that appears increasingly drawn on ideological extremes,” the artist writes on his website about the work, “there exists only right or wrong, black or white, red or blue. This hyperbolic re-envisioning underlines a severe problem in our current society. More importantly, it responds to a major crisis of masculinity and civility that is paving the way for the promotion of provocation, physical altercation and brutality.” The self which insulates against threat or defies imposed expectations from the external environment is the overarching active that ties each Socially Engaged artist together.

The Socially Engaged exhibition offers a small sample of each artist’s process of presenting the self through photography and videography. Contextually, each artist embodies experience and conveys a singular perspective, and, as women, as people of color, through honesty in creating art away from an agenda that is male, white or straight, they make radical works. Collectively, this is the common thread binding the works together to make the exhibition an absorbing experience, an intimate look into the identities of fiercely independent artists who each approach experience, aesthetics and communication quite differently.