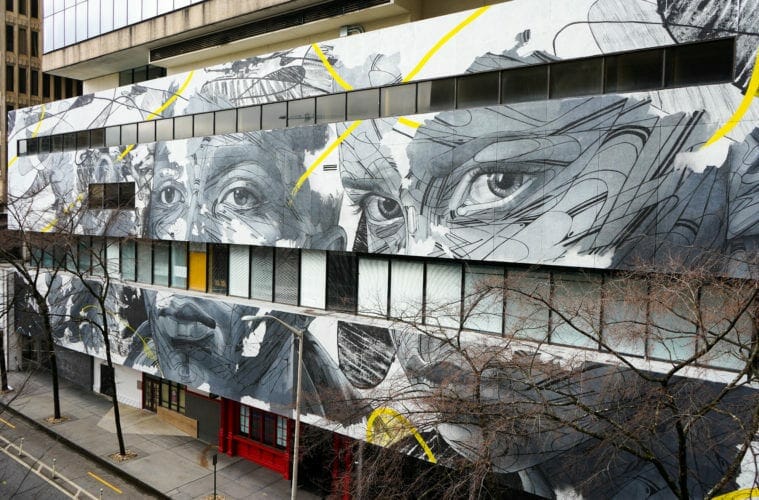 This 13,000-square-foot mural, titled "Symphony," is chiefly the creation of French street artist Hopare (real name Alexandre Monteiro), assisted by a three-woman Living Walls team. It can be seen along Peachtree Center Avenue. To date, the nonprofit has facilitated more than 150 murals in Atlanta, the region and internationally. (Photo by Enna Garkusha)

Nonprofit Living Walls, the City Speaks, has made art sustainable in Atlanta for 10 years

In the past decade Living Walls, The City Speaks, has facilitated more than 150 murals across the region and around the world. It has connected local and international artists to communities and urban development, leaving its footprints in Technicolor, swooping lines and creativity wherever it goes.

This year the Atlanta public-art nonprofit celebrates its first decade with an anniversary-book fundraising event at 6 p.m. March 23 at 8ARM on Ponce de Leon Avenue NE. The anniversary book, due for release August 13, is being written by Atlantan King Williams. It’s a compilation of news coverage, video recordings, never-before-seen photos, oral histories and cofounder/executive director Monica Campana’s handwritten journals. Details on the celebratory fundraiser can be found HERE. 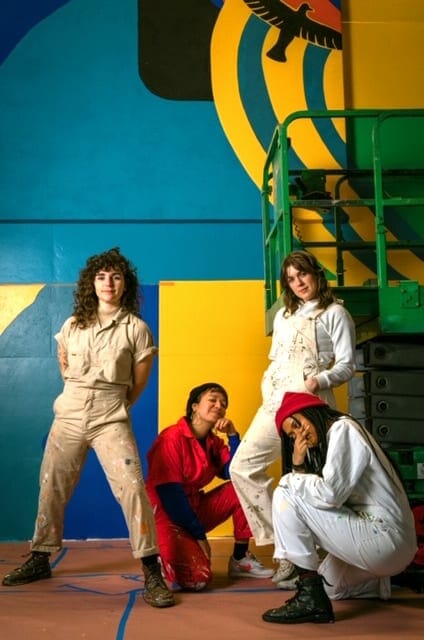 Campana moved to the United States from her native Peru in 1998 at age 15. By 2009, she was an Atlanta artist with growing concerns about the rapid gentrification and social injustices she saw. She and cofounder Blacki Migliozzi created Living Walls to give communities a voice in the public conversation about economic disfranchisement and social issues. Through art, largely murals.

“Working with Living Walls has been amazing,” says artist Jasmine Nicole Williams. “Traditionally I’m a printmaker, and I was so scared to do my first mural. Monica has been in the game for 10 years, and she knew exactly how to guide me into a new medium. Living Walls really instilled in me greater confidence. The experience has lit a fire under me, and I can’t wait to do another mural.”

As a result, Living Walls has commissioned Atlanta artists such as Yehimi Cambrón, Neka King, Dianna Settles and Williams, as well as Paris-based artist–activist–performer Kashink, among many others. 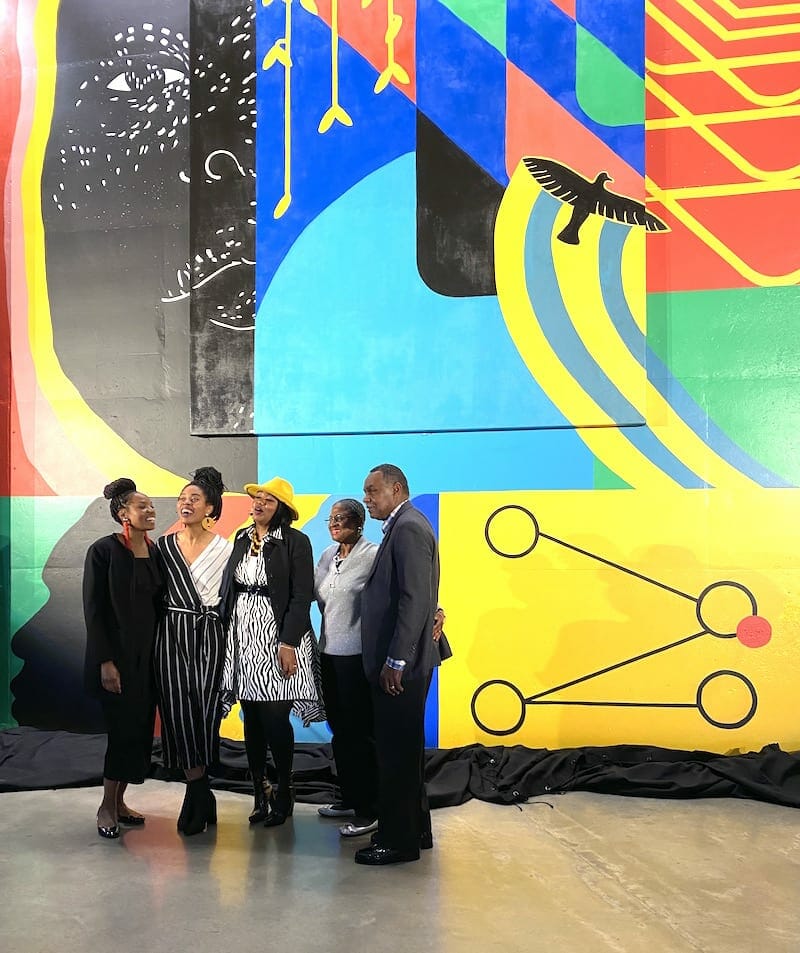 Muralist Neka King (second from left) celebrates with her family at Thursday’s unveiling of her mural “Storyteller” at Mercedes-Benz Stadium. (Photo by Lynne Tanzer)

King, in fact, unveiled Living Walls’s newest mural on Thursday morning at Mercedes-Benz Stadium. The 10-foot by 10-foot piece titled Storyteller, seen on the AT&T Perch, reflects her experiences as a black American female Southerner. “The idea of the mural,” King says, “is to tell a story. What the story is depends on you.” Storyteller was produced by an all-female team, with Kristen Consuegra directing the project Rebecca Kidd assisting King.

Living Walls has not been without its obstacles. In August 2012, residents in southeast Atlanta were in an uproar over two murals. One, in the Pittsburgh neighborhood, featured serpents and reptiles that religious community members called “demonic.” The other, found between Chosewood Park and Lakewood Heights, included images of an unclothed woman. Neighbors from churches, schools and a mosque called it “offensive and pornographic.”

Both pieces had their supporters but were eventually painted over. Reflecting, Campana says, “It was a dialogue that needed to happen and that I think needs to continue to happen.” Her only regret, she says, is that the dialogue would have been more fair if the artists had been part of the discussions.

Campana, now 37, was named one of Atlanta’s 500 Most Powerful Leaders by Atlanta Magazine in 2019, the same year the nonprofit inaugurated Living Walls Abroad, an annual program that supports Atlanta artists and celebrates cultural exchange. This past summer, it launched STOP TALKING. STOP HIV, an event series designed to spark conversation about the disease and prevention strategies. This fiscal year, Living Walls plans to invest $250,000 in artists, artist assistants, site managers and media.

“I am able to thrive as an artist in large part thanks to the work, love and dedication of this women-led organization,” says Cambrón, “and what it has done to make sure being an artist is sustainable in our city.”