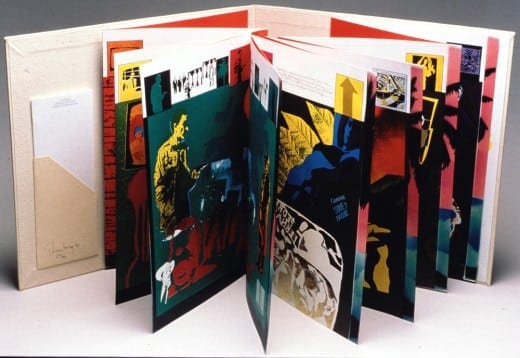 Artist’s books in “Endless Road: A Look at Nexus Press” a trip down memory lane, at ACAC In 1973, a group of photographers started the Nexus Art Collective, which ran a cooperative gallery in a storefront on Virginia Avenue. Four-plus decades later, this little start-up is the Atlanta Contemporary Art Center (ACAC), a legacy that continues to grow.

But back in 1976, the group launched a publication arm. Nexus Press became a hub of joyously experimental creative activity and an artist’s book publisher of international repute before it was shuttered in 2003.

Institutions as august as the Museum of Modern Art had standing orders to buy all of its publications, as did many university libraries across the country, from Rhode Island School of Design to The University of Utah. Artists from around the globe aspired to make work there.

Those involved with artist’s books still speak reverently of Nexus Press and its portfolio of more than 200 works of this medium. Most Atlantans, however, don’t have a clue.

That could change. ACAC has resurrected a bit of its past in Endless Road: A Look at Nexus Press. On view through July 25, the exhibition provides a rich survey of this unique and prestigious chapter of our art history.

The exhibition was already on the books when curator Daniel Fuller arrived earlier this year, but no arm-twisting was necessary. “The Press is the main reason I’m here,” says the self-professed artist’s book nerd and a maker himself.

Though the giant Heidelberg Kord 64 press had been sold and some materials had “walked,” as Fuller says, the Press he encountered when he entered its cinder-block building adjacent to the artists’ studios was like Pompeii — dusty and very much like the day it closed — right down to the yellow Post-it note on an invoice that read “Pay Immediately.” An evocation of Nexus Press’ digs in Endless Road.

Fuller has recreated something of that time capsule in one gallery. He brought over the great big, old, wooden desk piled with papers, the saddle-stitching machine and two cameras, one 18-feet long. Boxes of books are stacked as if ready to ship. Proofs papering the wall convey the energy of the place.

The large gallery is an orderly display of books and ephemera, much of it set on reading tables so that visitors can hold and thumb through them — as they were intended to be experienced. Fuller turns the pages of some of those under glass in Zen-like videos.

Ditto the subject matter, which encompasses provocative topics such as homosexuality and racial violence as well as autobiography, poetry, humor, narrative and straight landscape photography.

There’s a lot of history embedded in Fuller’s selections, but it’s probably not visible if you don’t already know the story. Herewith, then, is a very brief narrative:

Michael Goodman, one of the photographers who started the Nexus Collective, became founding director of Nexus Press in 1977. That year Nexus Collective had received three simultaneous grants — from the National Endowment for the Arts, the Georgia Council for the Arts and the City of Atlanta’s Bureau of Cultural Affairs (There was much more public money available then; the role of public grants in the development of this and other Atlanta institutions should be a discussion for another day.)

The grants enabled the group to move into an empty public school building on Forrest Avenue at the corner of Glen Iris and Ralph McGill Boulevard, fit out a space for the press and purchase equipment. Its first press was a used Hamada Star, purchased from a company that printed lottery tickets.

Talk about being the right person at the right time: Goodman, fresh from earning an MFA from the School of the Art Institute of Chicago, had gone to night school to learn printing trade. At the outset, the Press printed photographers’ books and brought in revenue printing flyers and such for community arts groups.

Nexus Press’ first big moment came in 1980. It started with Marjorie Smith, who had taken a class at the Press. Her husband, Moreland, who was on the board of Tuskegee University, brought to the collective’s attention the work of octogenarian P.H. Polk, the university’s longtime staff photographer who also had a commercial business. Recognizing his importance (think: James van der Zee), the photographers organized an exhibition and Nexus Press published the first limited edition monograph of his work, which is included in the exhibit.

“People went crazy,” Goodman recalls. “Stories appeared in national publications such as Life magazine. The show traveled to the Corcoran Gallery in Washington, D.C.”  Polk entered the rank of masters.

Goodman’s aspiration, though, was to make artist’s books. “I started bringing in artists and teachers that I met in Chicago and [organizing] other book events — workshops on offset printing and bookmaking — almost immediately,” he says. “This started our journey into making artist’s books.”

Over time, the classes helped build a knowledge base in town. Many attendees became interns and volunteers. This was crucial, says Goodman, because the medium is so labor-intensive. “They made our work possible,” he says.

Its programs also helped spread the word that that one of the few artist’s book publishers anywhere in the U.S. was (gasp!) down South. Eventually, notices of artist residencies would bring hundreds of proposals. Photographer Bill Burke came in 1983 to make They Shall Cast Out Demons. He would subsequently create two more there — I Want to Take Picture, Mine Fields (all included in the exhibition.) These groundbreaking projects, whose layouts and materials blew up the conventional picture/text format, established Nexus Press as a center for artist’s books and changed his personal trajectory.

“Nexus Press made my career,” the Massachusetts-based artist wrote in an email.

“I never set out to be a book artist, but I realized early in my life as a photographer that most of the pictures I saw and learned from were in books.

“Just around the time Nexus invited me down for my first residency, I saw a few books that went beyond a collection of pictures. Tulsa, The Lines of My Hand, Conversations With the Dead, Vagabond opened up my ideas about autobiography and the inclusion of material beyond the photographic.

“During my first visit I learned to make duotone and halftone and color separations and developed ideas about sequence and structure that are potentials in books… It was a magical time for me.” Pages from Bill Burke’s book, I Want to Take Picture.

Goodman, who saw his role as guiding artists to translate their ideas into a new medium, recalls, “He came [in 1983] with a box of photos. He told us that when he went to Thailand [afterward], he was already thinking of page spreads.” Jo Anne Paschall in 1994, the year she became director of Nexus Press director.

The learning went both ways, says Jo Anne Paschall, who started as assistant director under Clifton Meador in 1986 and became director in 1994. Once artists learned to think of the press as another one of their tools, they found even more ways to use it.

“Books produced in the early years were all the more remarkable because all we had was the Hamada Star offset press,” Paschall says. “It was small and old and really more suited for churches to put out their bulletins. Our second-hand Hamada had been printing lottery tickets for years. But the Press staff did so much with it that Hamada gave us a commendation.”

When the Hamada wore out in 1986, the staff worried that they would have to close the Press. But Atlanta artists understood its importance and mounted an auction, which, together with the generosity of patrons such as Joe Massey, funded the purchase of the Heidelberg press. This machine permitted the production of larger, more sophisticated books.

One of the ensuing high points, and a particular focus of the exhibition, was the program developed as part of the 1996 Cultural Olympiad, for which an artist from each of the five geographic areas represented by the Olympic rings was invited to make a book.

Paschall remembers working with inventive Japanese artist Shinro Ohtake, a multi-media artist known for his experimental artist’s books, as a real adventure. “Shinro liked scraping the surface of popular culture. He shipped us a crate of make ready [press set-up sheets] from Japanese print shops. When we saw the make ready and the books that he sent, we knew we could cut loose. “

She brought in materials — old photos, 45s, Beatles scrapbooks — and asked interns to raid their junk drawers. They scavenged elsewhere, even ironing discarded billboard paper for possible use.

The cross-cultural ATlanta 1945+50 fuses imagery from Japan and Atlanta to evoke high energy, visual rhythms that combine layers of media saturation with cultural history. Executed in four-color process plus, each press sheet requiring multiple runs on the press, the books also include 27 offset reproduced vintage photos that interns hand-tipped. It is a technical and visual marvel.

Paschall proudly remembers serving on a College Art Association panel, “Publishing in the Fine Arts,” with representatives of MOMA, Harry N. Abrams and other lights in the field. One panelist, the late design giant William Drenttel, approached her before the talk.

“He came up and said, ‘I heard you worked with Shinro Ohtake.’ I had brought the first completed copy with me. When I handed it to him, he literally dropped to his knees.” Representing the Press at the giant Frankfurt Book Fair in 2001 was equally gratifying. Paschall, who would resign that year, still smiles remembering the excitement she encountered. “So many people already knew about Nexus Press and were so happy to get to see the books,” she says. “The books sold like hotcakes. As a result, I was able to make my annual $40,000 quota in six months. That’s a lot of $3 books.”

Two years later, ACAC shut down Nexus Press. The decision was controversial, the reasons complex and the ensuing silence about the Press bizarre. Not even its former employees were allowed in the building (one of the many stories for another day.)

So it remained until 2013, when two curious ACAC staff members, Rachel Reese and Veronica Kessenich, were given permission to explore.

“We realized we had a gold mine,” says Reese. The staff slotted a show into the calendar.

Fuller describes the exhibition as a first look. “I hope it will encourage others to take it on,” he says. “The idea of letting this legacy slip away is unconscionable.”

If you want to see more Nexus Press books, you can find them in the ACA Library at SCAD, MOCA GA Education/Research Center and Emory University’s Manuscript, Archives, and Rare Book Library (MARBL), which just acquired ACAC’s archives (including those of Nexus Press) as well.