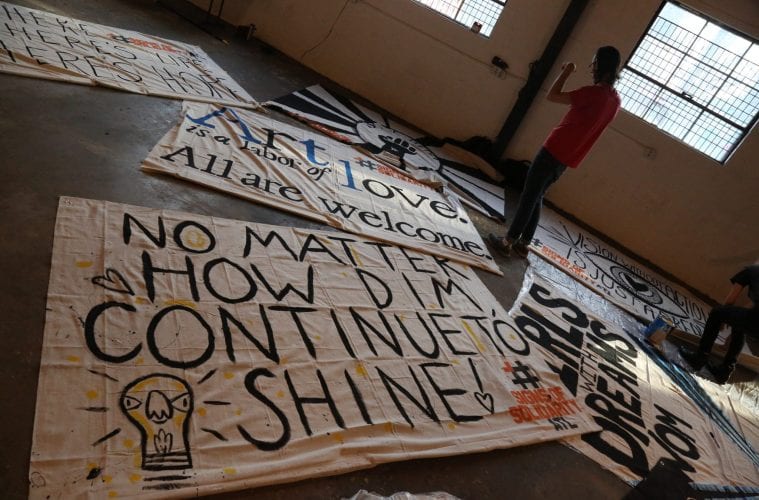 News: Signs of Solidarity ATL takes a stand for positivity in times of civil unrest

Atlanta woke up with a bit of a face-lift this morning. At prominent storefronts and buildings across Little Five Points, Castleberry Hill, Midtown, Downtown and East Atlanta Village, a motley crew of renegade artists, Signs of Solidarity ATL, has displayed a series of 16’ x 19’ banners bearing positive messages of love and inclusivism. “No Matter How Dim, Continue To Shine,” says artist Barry Lee’s work, hanging from Octane and Little Tart in Grant Park. In a politically charged and divided time in our history, the group hopes to unify and embolden citizens — an intrinsically Atlantan ethos, true to the city’s roots in peace and nonviolence in periods of civil unrest. 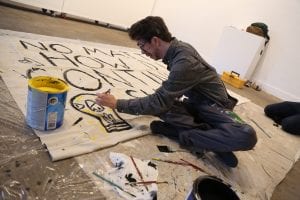 “This is a public art project, not a protest,” says Living Walls’ Monica Campana, one of the over 30 artists and art groups involved in Signs of Solidarity ATL. “This is just the beginning of everyone’s work taking a more responsible and political stance. We’re aware of our role as artists in the city. We have to keep spirits high and encourage people not to give up. What we need now is courage,” she says.

The citywide public art project was inspired by its sister project, Signs of Solidarity Philadelphia. The idea was simple: hang a few banners from private homes to spread solidarity and positivity. Within a week, the idea quickly gained traction and grew exponentially in scope, both in Philadelphia and Atlanta. “The project came together so quickly because everyone was so willing to help with time and resources,” says artist and entrepreneur Lynne Tanzer. “No one came with an ego or an agenda, everyone came to work, and those who needed help from more seasoned artists or project managers have been able to get that help, and a hug while they were at it.”

By the time the banners were hung in the dark of night on the 18th, Signs of Solidarity ATL had ballooned into a collaborative effort between over 30 Atlanta-area arts organizations, artists, writers, poets and creatives, with the consent and permission of dozens of local building and business owners. 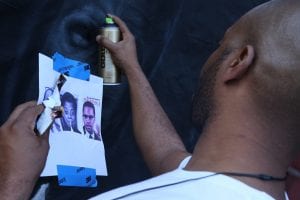 “We recognize that Atlanta is made better by its diverse communities,” said the collective in a public statement. With such a wide range of  participants and venues — Living Walls, Dashboard, Nikita Gale, Hi-Lo Press, Faatimah Stevens, Elliott Street Pub, Yo Yo Ferro, The Local, Mammal Gallery, Notch8 Gallery, Brutal Studio, Brandon English and Estela Semeco — one thing stands clear: Atlanta’s artists and small businesses are willing to assemble on behalf of positive change for the city. “By standing as a community, lifting our voices, using our skills, refusing to be silent in a peaceful way — we would make our heroes proud,” says Tanzer.

The banners will hang across town through Inauguration Day this weekend.