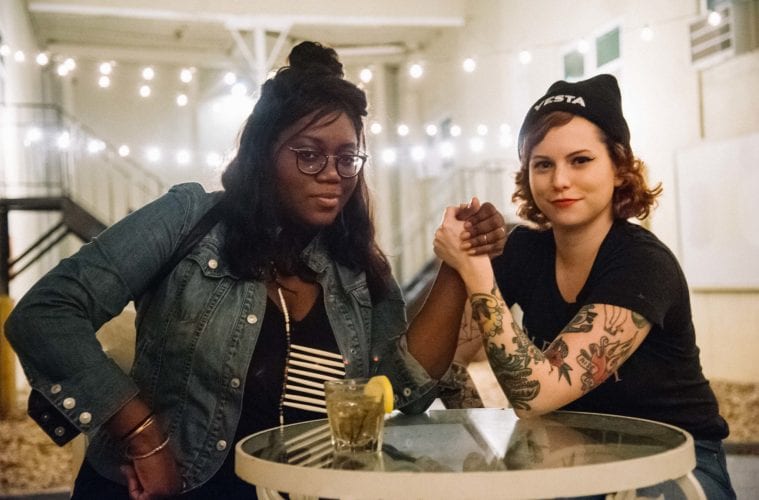 A new reading series appeared in Atlanta last year. But not just any reading series — one geared specifically for the underserved in the community: cis and trans women, non-binary people. Why? Because it was necessary. Marginalized writers felt underrepresented and, at times, insecure or unsafe on stage at the literary events Atlanta had to offer them. Then, in came Bleux Stockings Society, cultivating a safe and inclusive environment where voices that usually went under the radar could be heard loud and clear.

One year later, the organization has certainly had an impact. A countless number of new voices have debuted within the literary realm, and female and non-binary voices have a place to experiment with their work and thoughts, and share them in a secure environment.

On the eve of their one-year anniversary show, ArtsATL’s executive editor, Laura Relyea, caught up with co-organizers Amy Stufflebeam and Rita Leslie about the progress they’ve made. At the event, which took place this past Monday, ArtsATL’s Haylee Anne caught all the action. Here’s what we’ve got. A wild gorilla from the Blast-Off Burlesque! pack waits in the folds before pouncing on the audience.

ArtsATL: Congratulations! You’ve got a year under your belt. And since it’s the beginning of a new year, I’m sure y’all have been reflecting a lot.

To start, how has your understanding and interpretation of Atlanta’s writing scene changed over the past year? What other voids do you see within the community that need to be filled? Where is it improving?

Amy Stufflebeam: The past year has reinforced for me how vital it is that subsects of the Atlanta literary and performance community band together and support one another. It’s so easy to put the same people up over and over again, but not only does that fail to nurture a diverse art scene, it’s also incredibly boring. I’ve seen a lot of crossover between the live lit, slam poetry, burlesque and performance art community this year, and it has made all the difference. I hope that in the coming months we continue to cross-pollinate our audiences, spotlight new performers and provide numerous platforms for the wide range of voices in our city that need to be heard.

Rita Leslie: It seems as though the writing scene has expanded to include even more shows, which is, of course, amazing. The great thing about a city like Atlanta is that it’s a place that you can still influence the creative landscape in a real way. There are so many talented people doing so many wonderfully inventive things — and naturally, shows, projects and productions begin to overlap, creating a ultra collaborative environment. I think it’s amazing and rare. We’ve really got something special going on here in Atlanta. ArtsATL: Were there any surprising developments? Setbacks?

Stufflebeam: In the beginning we had some communication problems. It was difficult to neatly summarize what we were trying to do and why it was so important, particularly in regards to our safe space model. There is something inherently political about women and non-binary people gathering together to recharge and claim space in a society that values male voices above all others. Thankfully, once we got the ball rolling and held our first show, the pushback basically disappeared. We were lucky in that we received total support from our sister shows from the very beginning, which made weathering the storm a lot easier.

Leslie: Something that we need to always be aware of is language. I made a flub at a show, a closing remark I made in jest wasn’t inclusive of everyone in the communities we serve, it was brought to my attention, and it’s something that I’m much more mindful of now. Details are important. We’re catering to an extremely marginalized subsect of society. It’s our duty to get it right, ya know?

ArtsATL: Looking back on the year, what were some highlights from the readings and submissions you received?

Stufflebeam: It’s hard to choose! The Roast of the Patriarchy show had amazing energy and such an incredible lineup of lady performers. Rachel Garbus did a bit as the mom from however-many-kids and counting and absolutely destroyed me. Plus, Lace Larrabee, our guest host, was the perfect mix of snarky and sincere. I think back on that show very fondly.

Closest to my heart, of course, is the very first show. My co-founder, Ellaree, and I were both extremely nervous and emotional about how many people showed up to support us. It was cold as hell on the top floor of the Downtown Players Club, so people were huddled around a heater, introducing themselves and eagerly listening to each performer. I think we all felt a little bit like rebels, and that magic hung in the air all night.

Leslie: Oh man! So many pieces. My favorite came from the “Otherness” show. The performances were so fraught with emotion, beautiful language and expression. I think one of the best things about Bleux Stockings is the deep sense of community and camaraderie people experience when they come to our shows. I love to see audience members eagerly approach performers to say that their piece moved or inspired them. That’s what it’s all about, vulnerability breeds authenticity — it’s contagious. Yves Jeffcoat wove a tale on hardship and thriving.

ArtsATL: In what way would you like to see BSS continue to develop and grow?

Stufflebeam: Among our 2017 goals is getting our blog up and running, as well as introducing a BSS podcast. We’re planning on combining our powers with Theresa Davis of Art Amok and Java Monkey Speaks to put on a new event. The biggest goal though, I think, is to continue to vary our outreach in order to bring in new writers and performers. That is the essence of the show’s mission.

Leslie: I just want us to continue to foster openness and creativity within the social art space in addition to finding fresh new voices. I’d love to incorporate activism on a larger scale in conjunction with increased community engagement; we donate a portion of ticket sales to a different charity every month, which is great, but I’m always looking for ways to do more.

ArtsATL: What’s the feedback that you’ve gotten from the community?

Leslie: The feedback’s been overwhelmingly positive. There was clearly a need here; there’s a specific space that we’re filling.

ArtsATL: How has your own respective understandings of the diversity of race, gender and sexuality evolved since starting?

Stufflebeam: The most important thing I’ve learned is that listening is everything and hard conversations are necessary to nurture and grow something bigger than yourself. The goal of BSS is to offer a platform, an ear and a space to have those hard conversations. I only know my own lived experience, which is to say I know very little in the grand scheme of things. I’m grateful for the opportunity to shut up, listen and be supportive in any way I can. I hope the work that our BSS writers put out in the world inspire other people to reflect on their own privileges and biases and encourage active participation in making Atlanta a better place for everyone.

Leslie: As a person whose entire life is intersectional, I have a pretty solid grasp of the inner workings of race, gender and sexuality. I’m also fairly evolved, I’ve not achieved nirvana or anything, but I do know a thing or two about this, that and the other. :~)  (sarcasm laden)

ArtsATL: Who are some folks who really came out of the woodwork and amazed you with your work? Who have you got your eye on?

Stufflebeam: Qiana Cutts is an absolute powerhouse. Every time she gets on stage I can hardly wait to hear what she’s going to say next. Also, Anastasia Owen did her first performance with us and astounded everyone with her humor and natural storytelling ability. She definitely has a bright future in the Atlanta arts community, and I hope to see more of her.

Leslie: Ria Jones stood out and Danielle Gilmore. I’m hesitant to discuss the specifics of their respective pieces because it was a closed show (which unofficially denotes a certain amount of discretion), but they were tremendous! “Events like this matter. Always look at each other and check each other.” – Zaida