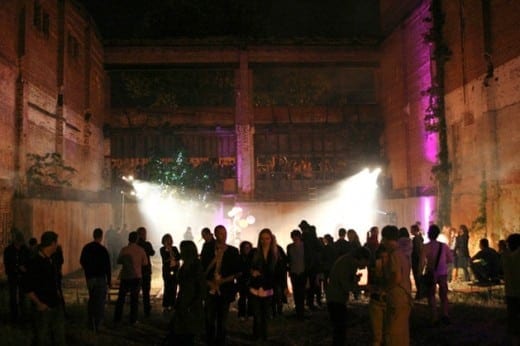 Flux Night, Atlanta’s festive night of free outdoor public art, will make a move to Grant Park this year as part of a total reconceptualization of the event.

Flux will now take place over several days instead of just one night, and the annual event will move each year to a new site in a new neighborhood. The new Flux debuts September 27–30 in Grant Park, Atlanta’s oldest city park, as the site celebrates its 135th year.

Four Atlanta artists have been selected to lead projects: Rachel K. Garceau, Rebecca M. K. Makus, Iman Person and Lauri Stallings. The artists’ projects, which will include both installations and performances, will run during park hours, from 6 a.m. to 11 p.m., during the event. Over the summer, the artists will participate in a program called “Flux Lab,” intended to facilitate the artists’ exploration of the park and to help introduce the public to the work as it develops.

Initially evolving out of the similar 2008 and 2009 Le Flash events, Flux Night debuted in 2010 as a one-night exhibition of free public art in Castleberry Hill. The combination of engaging contemporary works and a festive outdoor environment proved enormously popular, and the annual event grew faster and larger than Flux Projects, the small nonprofit that produces it, could manage. In 2014, organizers chose to put Flux Night on hiatus. For a time, Flux Projects focused on individual public art projects and performances around the city, such as Up Right Atlanta featuring sound suits by Nick Cave and choreography by T. Lang at Ponce City Market in April of 2015.

Flux Night reemerged in the fall of 2015 with a larger budget and renowned New York curator Nato Thompson of Creative Time at the helm. Thompson chose to move the event to the MLK Historic District in the Old Fourth Ward, hoping to create a more serious and unified aesthetic for the event with a social justice theme.

But the event had to be postponed due to inclement weather, and a rescheduled Flux Night 2015 met with mixed results. A Burnaway review entitled What the Flux? echoed the sentiments of many participants, expressing disappointment with a number of nonfunctioning installations and unengaging projects. “Despite having extra time to plan,” wrote Atlanta critic Matthew Terrell in his review, “the event was still plagued by technical and organizational difficulties. . . . Unfortunately, the vibrancy and energy of the old Flux Night was lost in this new vision.”

In 2016, Flux once again put the event on hold and announced the hiring of the organization’s first-ever full-time artistic director, Melissa Messina. In an interview with ArtsATL, Messina promised renewed engagement with Atlanta artists and more year-round Flux programming. Her tenure in the position was somewhat short-lived, however, and Messina won’t be behind the 2018 event. Organizers at Flux say they curated the new event internally, with some artists invited and others selected from an open call.