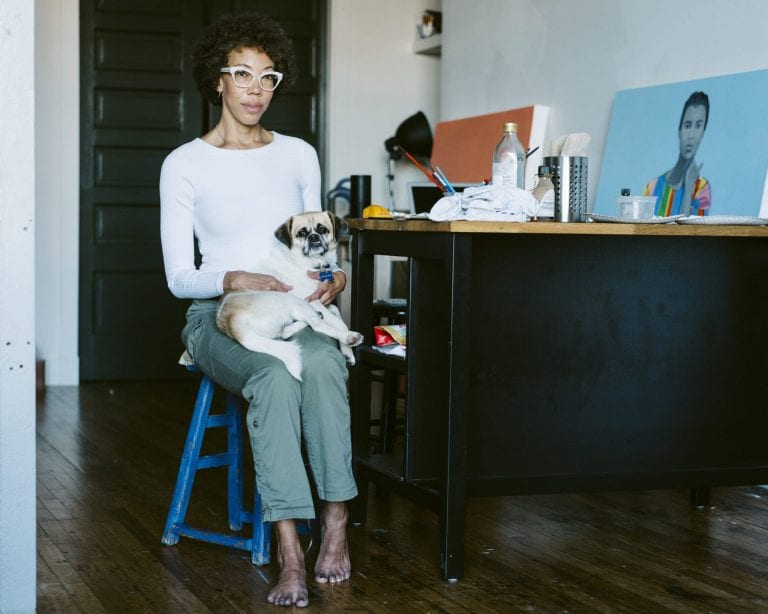 When the Smithsonian’s National Portrait Gallery commissioned Amy Sherald to paint an official portrait of former first lady Michelle Obama last fall, Sherald’s name was already on the lips of important art collectors, curators and critics. But when the Columbus, Georgia-native helped FLOTUS unveil the painting at a ceremony in Washington, DC, on February 12, suddenly the whole world was talking.

Life has yet to return to normal for Sherald, but her Pekingese-Jack Russell mix, August Wilson, still hasn’t given her a pass on their morning walks. He and Sherald allowed ArtsATL to tag along, by phone, as they strolled through their Baltimore neighborhood, to talk about the portrait that launched a million tweets, the class trip that changed her life and her top picks for good eats in the ATL.

ArtsATL: Oscar Wilde said, “Every portrait that is painted with feeling is a portrait of the artist, not of the sitter.” To what extent is that true, or not, regarding your portrait of Michelle Obama?

Amy Sherald: If you google Michelle Obama’s name, you’ll find hundreds of thousands of photographs of her taken over the last decade. All of them, to me, kind of read in the same way: she’s smiling on a world stage. But I wanted to try to show a little bit of her private self and leave the world with a different version of her. I wanted to make sure it was a portrait that was true to who she was, and give us a peek into her interiority.

ArtsATL: The National Portrait Gallery recently announced that your portrait of the First Lady had to be moved to a larger space owing to increased attendance. Did you anticipate this on the day your painting was unveiled?

Sherald: No. I knew it was originally going to be hung in the new exhibition hallway, which I was not exactly pleased with because the location is a tight, cramped space. So I was pretty excited to learn they were moving it to another room where she would have a little more space, and people wouldn’t have to walk past her portrait in an assembly line.

ArtsATL: You and Mrs. Obama made for quite a statuesque pair when bookending her portrait at the unveiling. Who designed your crop top and skirt? Did you agonize over what to wear for the occasion?

Sherald: The designer was Dion Lee, and I didn’t agonize over what to wear. I just did what anybody else in my position would have done and used a stylist. I reached out to my friend, Jason Bolden, who lives in LA and styles Taraji P. Henson and Yara Shahidi. He came to DC, brought some options for me and I chose the one that I loved best.

ArtsATL: The portraits of POTUS and FLOTUS triggered countless passionate discussions, editorials and arguments about modern art in America. Were you prepared for that level of Monday morning quarterbacking?

Sherald: I knew some people would get it and some people wouldn’t. We discussed the fact that there was going to be criticism, and I was OK with it . . . even though it’s a little different when it actually ends up at your front door on an hourly basis, coming through your inbox and website. I didn’t make a portrait that I thought everybody was going to like. I made a portrait that meant something to me, and that I knew meant something to Michelle, and that’s something that I really cared about. As I always say: Some people need their poetry to rhyme, and the rest of us can catch up.

ArtsATL: A painter must be an observer, first and foremost. From what I’ve read about you, this has always been your comfort zone. Has the shift to becoming an object of so much discussion, curiosity and adulation been challenging?

Sherald: No. Somebody told me you can’t pay attention to the good critics or the bad ones; you just want to continue to make your work without getting caught up in either. I’m taking it all with a grain of salt, and continue to push forward.

ArtsATL: The heightened sense of self-awareness that comes with celebrity can be a burden. The solution for some is to wear a mask in public as a means of self-preservation. Did this apply to Mrs. Obama?

Sherald: There are some people, like me, who are just uncomfortable in front of the camera. As soon as we see it, we flinch. But Mrs. Obama was comfortable and easy to work with. She’s used to being in front of the camera, so it was easier for her to not think about the fact that I was looking at her while photographing her. If she had a worry, I think the main thing was being too much of her authentic self. When she publicly acknowledged that she was proud of her country for the first time, that’s the part of herself she had to quiet down, the pieces she had to hide because the world wasn’t ready.

ArtsATL: A photograph of a toddler named Parker Curry gazing up at the First Lady’s portrait went viral on social media and led to a private audience with FLOTUS. How did the image of Parker standing mesmerized in front of your canvas impact you?

Sherald: Seeing Parker took me back to Columbus, Georgia, in 1986 when I visited a museum on a sixth grade field trip and saw Bo Bartlett’s Object Permanence. He’d painted himself as a black man, and that was the first time I’d ever seen a painting of a black person in my life. I remember standing there and looking at it for five or 10 minutes. I was just jolted by it. By then, I already knew that I wanted to be an artist, but when I saw that painting I knew I could be an artist. The experience transformed me and created my trajectory.

ArtsATL: Have you met Parker?

Sherald: [Laughs] She’s adorable. I met her at the National Portrait Gallery, and she ran up to me and said, “You painted ‘Shell Obama!”

ArtsATL: You trained as a painter in Atlanta, earned a BA from Clark Atlanta University, were an artist-in-residence in Spelman’s program in Portobelo, Panama, and received your master’s degree in painting from the Maryland Institute College of Art. Is there a mentor or role model from your days in Atlanta whose words, example or encouragement sticks with you today?

Sherald: Arturo Lindsay was my mentor at Spelman. I knew I wanted to be an artist, but didn’t really figure out what that entailed until after I’d graduated and started assisting him and installing shows as an artist-in-residence at the Museo de Arte Contemporáneo in Panama. He encouraged me to go to graduate school and stay on track, and the apprenticeship helped me realize I needed to further my education when it came to producing work at his caliber.

ArtsATL: Given your roots in Atlanta, what does it feel like to be the recipient of a Driskell Prize from the High Museum?

Sherald: When I left Atlanta for graduate school, I couldn’t envision moving back, because I thought my career would suffer. I saw Atlanta as a music industry city, not an art industry city. So I’m excited to have this connection, come back home and share this event with my family because they still live there.

ArtsATL: Were you a frequent visitor at the High when you lived in Atlanta?

Sherald: When I lived there, I would go pretty often. Now, every time I come home, I take my 12-year-old niece. She really likes the modern art piece that’s mirrored [Anish Kapoor’s Untitled], that kind of breaks your face up when you look at it.

ArtsATL: What will you try to do, see, eat, hear or visit while in town?

Sherald: I usually get a biscuit and breakfast at the Flying Biscuit on 10th and Piedmont because I used to work there. Revolution Doughnuts & Coffee in downtown Decatur will be another destination. And my sister and I usually go to Sun in My Belly, which is also near her house in Decatur.

Sherald: I feel like I’m just getting started. The images that I will continue to make of black people just being black will fill up the gap in the narrative of American art. I’m inspired by Kara Walker. I see her work is necessary. And I see mine as a resting place: a place you can come find love [and] look at an image that reflects love back to you. I want my work to be historically relevant, and to exist in a way that allows me to be in conversation with other American realists.

ArtsATL: Who are some of the other contemporary artists you admire?

Sherald: I love Andy Wyeth. And I find similarities between my paintings and the photographs of Wayne Lawrence, Erwin Olaf and Rineke Dijkstra, who all compose their imagery with very simple figures that convey a lot of emotion against spare backdrops.

ArtsATL: Do you see a through-line between your expression as a painter today and that seminal moment in front of Bo Bartlett’s canvas 32 years ago?

Sherald: Bo’s painting changed my expectation of what I thought I would see when I walked into a museum. I want my paintings, including that of FLOTUS, to change expectations as well. What institutions hold as valuable — by hanging images on their walls or displaying installations — tell us what we should value. They direct us to what is valuable and what isn’t valuable. I think black artists are inspecting our own humanity, altering perspectives, producing some of the best work out there now, and creating space for ourselves in these institutions.

Watch Sherald’s remarks at the Obama Portrait Unveiling below: