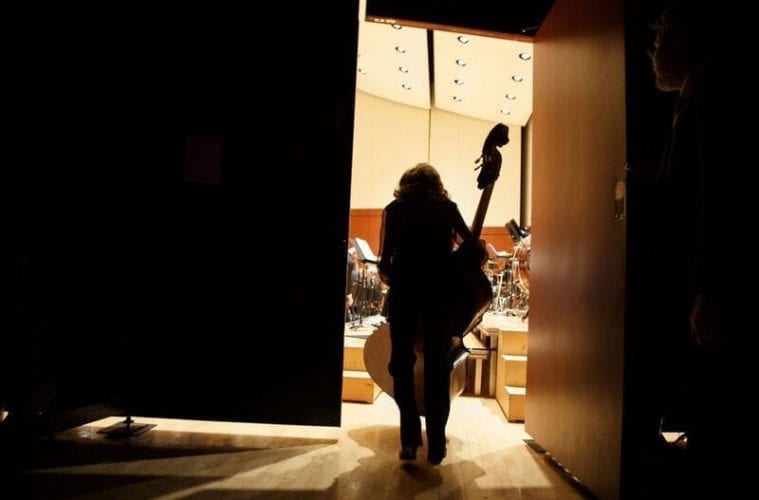 Jane Little, a founding member of the Atlanta Symphony Orchestra who held the world record for longest tenure with a professional orchestra, died Sunday night at the age of 87 after collapsing on stage during a performance at Symphony Hall.

Little collapsed as the orchestra performed the encore of Irving Berlin’s “There’s No Business Like Show Business” during a Pops concert that celebrated Broadway’s “Golden Age.” She was briefly revived by emergency responders and a member of the ASO chorus who is medically trained, then transported to Grady Memorial Hospital, where she later died. Little was physically smaller than her double bass.

“Jane Little was an inspiration for many reasons,” Jennifer Barlament, executive director of the Atlanta Symphony Orchestra, said in a statement. “She was a woman who succeeded in a role traditionally reserved for men. She was a person of modest stature who played the biggest instrument in the orchestra. She was tenacious, miraculously fighting off multiple health challenges to tag her world record. And she was passionate, doing what she loved until the very end of her life.”

Little began her career in 1945 after only two years of instruction on the double bass, as a founding member of the Atlanta Youth Symphony Orchestra, which evolved into the Atlanta Symphony Orchestra. She played under all four of the orchestra’s music directors: Henry Sopkin, Robert Shaw, Yoel Levi and Robert Spano.

She turned 87 on February 2 and performed with the orchestra two days later to mark the 71st anniversary of her first concert. The event gave her the record for longest professional tenure with a single orchestra, a record that is pending and under review by the Guinness World Records.

In recent years, Little had fought illnesses, including multiple myeloma, a form of cancer. She had returned to the orchestra in February after suffering a fall last year.

Little was the assistant principal bass emeritus for the ASO, and had planned to retire at the end of the season. She often quipped that she wanted to take up bass guitar and form a jazz group called The Grannies. An Atlanta native, Little attended the University of Georgia and studied for four years with the principal bass player of the Chicago Symphony. She was principal bass with the Theater of the Stars Orchestra for 15 years, and played extensively with regional ballet and opera companies, as well as in touring performances of the American Ballet Theatre, Covent Garden Ballet and Boris Goldovsky Opera Theatre. Twenty years ago this July, Little performed in the 1996 Atlanta Olympic opening and closing ceremonies with “Olympic Fanfare and Theme” composer and conductor John Williams.

For most of her career, Little performed using a rare Carlo Giuseppi Testore bass built in 1705.

In 1953, she met and married fellow Atlanta Symphony Orchestra musician and principal flute, Warren Little. They were inseparable until Warren’s death in 2002. Jane and Warren had no children; Ms. Little is survived by her nephews and several great nieces and nephews.

According to the ASO, memorial service details remain pending and will be shared when available. ArtsATL will publish an appreciation of Little and her career in the coming days.

“Being a member of the Atlanta Symphony Orchestra was deeply meaningful to her,” Barlament said. “To those of us who had the pleasure of knowing her, she was a loving, generous, modest, kind friend who was full of warmth, with a great sense of humor and style. She was an inspiration for everyone at the Atlanta Symphony Orchestra and for audiences who enjoyed her performances spanning seven decades. We will miss her greatly.”