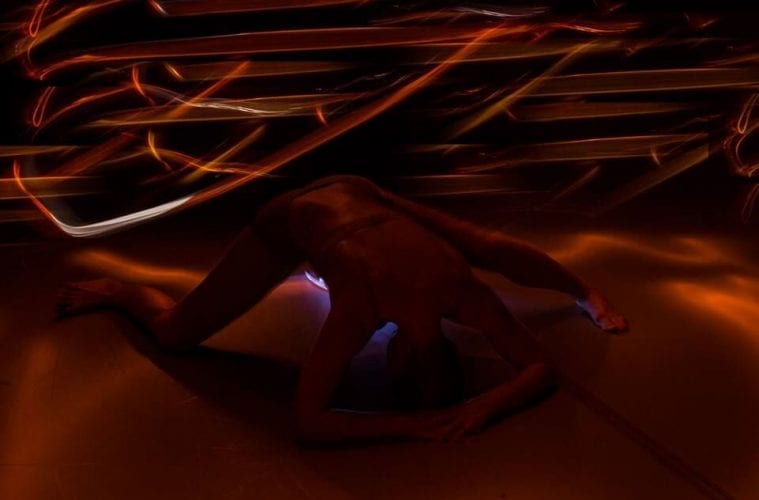 Preview: Anicka Austin and Crystal Monds on healing and social justice efforts with photography and movement in “CHROMA”

The prolific Anicka Austin (Lucky Penny Work Room resident artist, a member of gloATL, an organizer for The Boiler Room, and more) combines energies with visual artist, activist and fellow Atlanta Yogi Crystal Monds for CHROMA: Spring, three exhibits at Arketype / Axess Stones at 8 p.m., May 20-22. The two first met through Austin’s work at Dance Chance, after which Monds performed in Austin’s performance series Premier Premiere at Eyedrum. In the first iteration of a year-long, seven-show project, each of the three evenings will focus on a different color (“Blue,” “Orange” and “Green,” respectively) and feature performance, light, sound and photography installations. Austin and Monds spoke with ArtsATL about the project’s inception and development.

Austin: Ancestrally, color has been used for healing since the dawn of human consciousness. Initially, I got excited about this project because thinking about movement in rooms filled with color made me think of jubilance and positivity and its necessity in our lives, as in, not a luxury. So we talked about combining a movement project and Crystal’s previous concept around light and color. Crystal wanted to expand Out of Darkness Comes, the previous healing project highlighting the creativity in darkness. Wanting to expand that project and explore chakras more intentionally felt like serendipity. So we put our Wonder Twins rings together.

ArtsATL: How has the idea shifted since?

Austin: We started to put more emphasis on healing so that it makes better use of our complete offerings. We both do healing work so we wanted to make it a little more substantial than people just looking at color. We wanted people to feel through it. All aspects of the work reflect this. For example, movement, photographic direction, music and costume are shifting constantly based on moods and emotions that are elicited based on experiencing different color frequencies.

ArtsATL: What color theories have been particularly influential to your process?

ArtsATL: Why start with blue, orange and green?

Monds: We’re not doing the chakras in the order from base to crown. We wanted to move with what colors felt right for the seasons we’re exhibiting. Spring being the time of bloom and new beginnings felt like a better time for these particular colors.

Austin: These colors represent spring in that blue is an expression of communication and outward presentation, green is associated with opening the heart, like things growing and blooming, and playfulness manifests through orange. Spring feels playful and light.

ArtsATL: How did you choose your dancers?

Austin: From intuition, really. Some of them I’ve worked with before and others I just saw and had a good feeling. And it turns out that they are all amazing together. Overall, there is a sense of being able to feel and experience in the moment of creating the work (that will definitely carry over into the actual exhibition) and add to the process with their own artistry. It’s been so great to work with that.

Monds: After Anicka chose the dancers, I assigned specific colors, for the photographic series, to each of them based on the mood they generally gave off by aesthetics and movement.

ArtsATL: You’re running an ambitious IndieGoGo campaign , and held a preview/fundraiser event at Eyedrum, emphasizing throughout the importance of paying artists for their work. How has the fundraising developed (and been developed by) the course of the project? 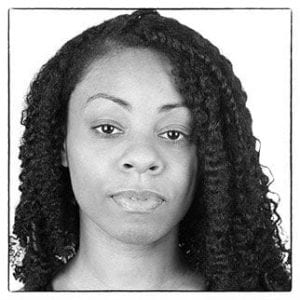 Austin: Knowing that we would be working over the course of a year on seven completely different exhibitions, with seven completely different full-length performances, has shaped the fundraising. The initial preview at Eyedrum helped us pay dancers for rehearsals at the end of the month, which is not always guaranteed with dance jobs. Just recently an article floating around Facebook talked about dancers being the most underpaid artists. Gas and food costs at the time you have to pay for it, and they obviously need those things to get to rehearsal and not pass out!

Monds: We started out with a pretty quaint itemized budget. Knowing how expensive photographic prints are, I began my estimates by thinking about what I could print on my own. Soon down the line, I began to more fully acknowledge how ambitious we started and wanted to outsource to make everything consistent. We wanted to make sure that we were compartmentalizing our specialties in the best way possible while also making sure not to burn ourselves out.

Austin: Also, we really wanted to take advantage of the fact that exploring color in this way is once in a lifetime so it should be big! Costumes are out of the most beautiful textured fabrics, etc. The rooms will be transformed with light and huge photographs.

ArtsATL: The first iteration is being hosted by Arketype / Axess Stones, which creates and markets natural stone, glass and tile products for residential and commercial use. What brought you to them?

Monds: They worked with DanceATL previously and when they came to our preview fundraiser they really enjoyed the show and were excited about the project. It was the perfect time because that’s when we were looking for spaces.

ArtsATL: You have also been updating a Tumblr page showing the work’s progress. One post from Crystal describes CHROMA as “a queer-Black-woman-healer led project that blends art with ancestral healing.” How does your sense of identity, both individually and as a team, inform this particular exhibition?

Monds: My identity as a Black, queer woman in the South informs this project greatly on a personal level because I am infusing all that I am into each piece. Energetically, the work is very involved in the ways that I heal myself and others and they highly reflect the ways that I show up in the world in the various activist/social justice communities that I’m a part of. In addition, it is my belief that all Black women (Creole in particular here) are intrinsic healers because of the ways we’ve needed to keep close ties to our healing ancestries to survive in a world as largely (doubly) oppressed people and remain happy, joyful and resilient. Queer, of course, is simply a part of my identity and is sometimes seen as a hardship in the world.

Austin: It’s important for me to be visible as a Black female choreographer. That’s important overall. Having a cast that is diverse is necessary and reflects my aesthetic and life views (a person can’t be in a homogenous environment and expect to learn how to show up for people). Representation of culture in diverse ways is necessary when you look for confirmation or understanding and can find someone you can identify with. You as in a little girl (Black) who has to search harder to see other Black female contemporary choreographers that she can feel good dancing with or finding mentorship in. I want to add to the women of color choreographers (Sidra Bell, Camille Brown) who move in contemporary ways and inspire.

ArtsATL: You’ve also described yourselves as “artists active in healing justice efforts.” What are your ultimate healing goals with this project, particularly in terms of Atlanta, Georgia?

Austin: It’s been important to be of service to people in organizing positions through yoga. And I think Crystal is the most active and really incredible at providing healing services for people who are doing the work to, you know, change legislation, speak up about injustice, etc. The people doing the footwork as activists need care and methods for self-care that Crystal really helps provide.

Monds: Our ultimate healing goals with this project are, unlike the entire exhibits, not extremely ambitious. We just want people to feel. We are using all that we have at our disposal to create a full experience and make people feel positively through this project. Blue, for example, will be a color where it will encourage the raising of voices too often unheard, and hopefully, balance the voices too often dominating. This same balancing act will apply to each color. We are also taking care to make the exhibits accessible so that the feelings can be experienced by everyone, not just those with the luxury of being in the art world.