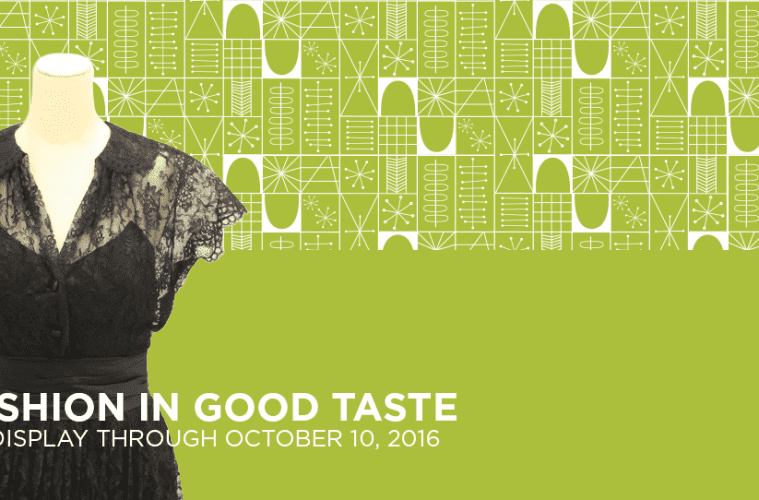 The Swan House at the Atlanta History Center is showcasing five decades of textiles and clothing in an exhibition titled Fashion in Good Taste through October 10. 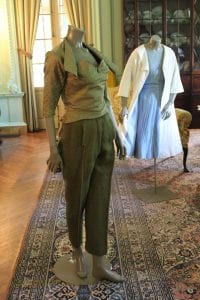 Dress of blue cotton voile with coat of white cotton pique. Designed by Ann Moore Ann Moore wore this ensemble to the 75th anniversary celebration of Spelman College. At that time, she was honored as a distinguished alumna for her contributions to her field. Moore called this piece “Miss Spelman,” because it was designed for the event and completed in the school’s colors. Gift of Ann Moore Couturiere

Designed by Philip Trammell Shutze, the Italianate estate was originally home to Emily and Edward Inman from 1928 until his death in 1931 and her passing in 1965. The Atlanta Historical Society acquired the 28-acre Buckhead property in 1966 and opened it to the public in 1967. A highly coveted venue for formal affairs, the historic house museum is also recognizable to moviegoers worldwide after appearing in the blockbuster film The Hunger Games: Catching Fire.

Swan motifs abound inside and out and inspired the naming of the house by Mrs. Inman. But the black and white marble floors in the entry hall and curved, free-standing staircase signal a break from the stuffy interior design aesthetics of Victorians in favor of simplicity, balance and proportion.

According to Jessica Rast VanLanduyt, historic house manager for Swan House and Margaret Mitchell House, “Shutze’s interiors are so comfortable and well-scaled that our visitors can imagine themselves living here.” And the juxtaposition of domesticity with the extreme elegance of fine plaster work, hand-carved wood paneling and chintz-covered furniture are what proved irresistible to her when scouting locations for Fashion in Good Taste.

The show is comprised of 26 mannequins dressed to represent trends from the Roaring Twenties through the Swinging Sixties. Six of the pieces on exhibit were designed or created by Georgia women including Ann Moore, Clyde Ingram and Mary Crovatt Hambidge, an actress-turned-weaver who founded the Hambidge Center in the North Georgia Mountains. Rounding out the installations are on-site interpreters who offer visitors insights on life at Swan House through the eyes of the Inmans, Shutze and staff members.

Fashion in Good Taste was underwritten by Emily Bourne Grigsby, a former model, interior designer, opera singer, attorney and pilot. The 94-year-old Renaissance woman wanted to showcase the History Center’s fashion and textile collection and support an exhibit on women’s history in Georgia.

A black and pink Chanel cocktail dress, the only piece to be featured solo throughout the show, can be seen in the morning room. Purchased by Grigsby during a Parisian holiday in the 1960s, and subsequently donated to the Center, the strapless confection is a touchstone of a more refined era, according to the Atlanta resident.

“I miss the days when women dressed more formally in public,” wrote Grigsby in an email. “My friends and I looked forward to picking out a special dress and jewelry to wear to a special occasion. Knowing that our husbands took the time to look especially nice for us, and taking the time to look especially nice for them, seemed to add romance and glamor to the relationship and the event.”

There is no shortage of romance and glamor in the Swan House’s formal dining room. Hand-painted chinoiserie wallpaper, an Aubusson rug and plaid draperies serve as a backdrop for signature styles from the 1920s — including the sleeveless, drop-waist gown worn by Georgia’s First Lady, Sarah Frances Grant Slaton, during her 1928 presentation at London’s Court of St. James’s. Other straight-cut dresses, adorned with art deco influences such as beading, fringes and feathers, reflect the zeitgeist of flappers who bobbed their hair, smoked, drank and rewrote the rules of female propriety.

The mood turns more somber in the library, where fashion from the 1930s is chronicled. Though the Great Depression marked the advent of clothing design that prioritized frugality and function, Gone With the Wind author Margaret Mitchell, a former flapper, managed to channel youthful energy in 1938 with her halter-topped dress in a colorful tribal print. And a wrap dress with full skirt and three-quarter sleeves, designed by Ingram, belies the hardscrabble realities of the nation in the midst of fiscal collapse. 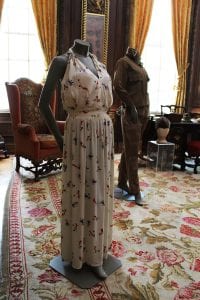 Silk halter top and matching skirt, worn by Margaret Mitchell Marsh, 1938.
Following her death in 1949, Marsh’s husband, John, gave this dress to her friend, Susan Myrick. Myrick was the technical advisor for the film adaptation of Gone With the Wind. Mitchell, a former Atlanta Journal Sunday Magazine journalist, and Myrick, a writer for the Macon Telegraph, met at the Georgia Press Institute in 1928 and remained close friends. Gift of Lil L. James

Sartorial shifts of the 1940s take center stage on the second-floor landing. A dark suit with shoulder pads and pencil skirt reflect Hollywood’s ideal of the businesswoman while a crisp line of World War II military uniforms offers a more sobering snapshot of the Greatest Generation. American couturier Mainbocher designed uniforms for the WAVES (a branch of the U.S. Naval Reserves), and his commission was so stylish that it became a useful recruiting tool for the Navy. At the other end of the spectrum, a simple pair of cotton twill overalls with feminine tailoring and pink piping brings to mind Rosie the Riveter and every working woman who contributed to the war effort at home.

By the 1950s, luxury returned to fashion. The morning room at Swan House is the setting for Moore’s “Miss Spelman” ensemble, a pale blue dress and white overcoat that pays homage to the designer’s alma mater Spelman College (Class of 1943) and Christian Dior’s innovation of nipped waistlines and full circle skirts.

Like Grigsby, Moore feels nostalgic for the days when women wore dresses . . . as opposed to having the dresses wear them.

“I like to watch the red carpet portion of awards season to see what’s going on,” explained the Atlanta native during a phone interview. “But I see exhibitionism at the expense of elegance and personality. We are super-saturated with the flesh. Garments now serve the main purpose of eroticism . . . attracting attention to various parts of the body in an inartistic manner.”

The Swan House’s walk through history concludes with iconic looks from the 1960s, where bright colors and bold fabrics were de rigueur. Hot pants, a silver-coated paper dress (inspired by the space-age) and tunic pantsuit by Courrèges, who gave the world white go-go boots, recall the era’s penchant for rising hemlines, rebellion and resistance to the status quo.

It’s a coincidence that Fashion in Good Taste is bookended by decades best remembered for social and sartorial upheavals. But the collection testifies to the fact that timeless design never goes out of style.