News: Daniel Arsham will collaborate with the High Museum and Atlanta Symphony Orchestra this spring

Contemporary artist Daniel Arsham will be coming to the High Museum of Art this spring to install three interrelated installations in the museum’s interiors, in an effort co-organized by the Daniel Arsham Studio and the High Museum of Art in collaboration with Galerie Perrotin, New York. Arsham’s project, Daniel Arsham: Hourglass will be on display March 4 through May 21, 2017, in conjunction with the artist’s upcoming collaborations with the Atlanta Symphony Orchestra.

Arsham, who is the Woodruff Arts Center’s 2016-17 Phil Kent Creative Fellow, will be partnering with the Atlanta Symphony Orchestra for Christopher Theofanidis’ commission “Creation/Creator” and Christoph Willibald Gluck’s opera “Orfeo et Euridice.” “Creation/Creator” will be presented at concerts in Atlanta Symphony Hall on March 23 and 25, 2017, and at the inaugural SHIFT Festival on March 31, 2017, at The Kennedy Center in Washington, D.C. Gluck’s “Orfeo et Euridice” will be presented at Atlanta Symphony Hall in May 2017.

Arsham is an Ohio native who grew up predominately in Miami. In 1999 he received the YoungArts scholarship from the National YoungArts Foundation and attended Cooper Union in New York City. Beginning in 2004, Arsham began producing scenography for ballets, symphony orchestras, operas and music videos, working with composers and choreographers such as Merce Cunningham, Pharrell Williams and Jonah Bokaer, among others. Arsham founded the design and architectural firm Snarkitecture with Alex Mustonen in 2007 and the production company Film the Future in 2014 with Ben Louis Nicholas and Courtney Andrialis. His work has been presented at MoMA PS1, the MCA Academy in Miami, the Athens Biennale, the New Museum, the Contemporary Arts Center Cincinnati and other renowned institutions. Arsham lives and works in New York City.

“Along with Director James Alexander, Arsham will create stage environment installations for both productions,” said Evans Mirageas, the Atlanta Symphony Orchestra’s vice president for artistic planning and operations. “His initial ideas for ‘Creation/Creator’ focus on light and texture, bathing the stage in an evolving color scheme tied to the individual movements. For ‘Orfeo,’ Arsham is at work on both physical scenic elements and lighting treatments referencing both the ancient origins of the story and the eternally modern emotional states of love and loss.” 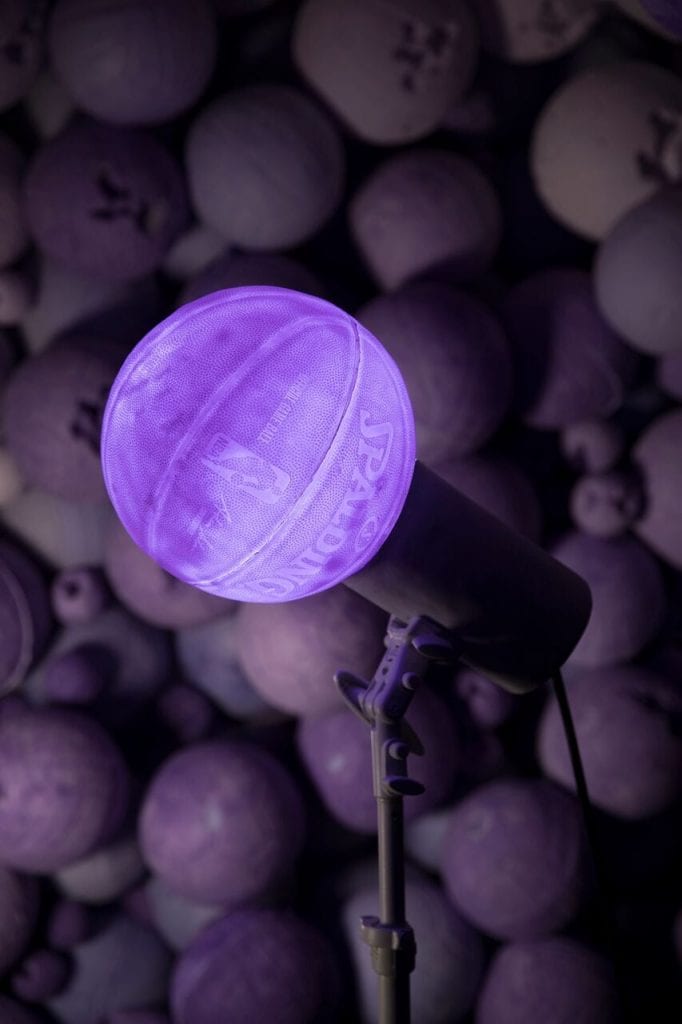 At the High Museum, Arsham will be combining audio, architecture, sculpture, installation and performance and showcase some of his first works in color, a significant break in his conventionally black-and-white palette. Arsham’s use of purple and blue throughout the exhibition is a significant departure from his earlier work, which relied on a palette of black, white and gray tones. Arsham is color-blind but has recently been able to see a broader, more vibrant spectrum of color by using special glasses that refract light. This vibrancy has translated into his work and marks an important new visual language in this exhibition.

“Daniel Arsham: Hourglass” elaborates on “Fictional Archaeology,” a body of work in which the artist casts everyday objects in precious and semi-precious stones and metals, such as basketball jerseys in volcanic ash and selenite or cameras in crushed obsidian, shattered glass and rose quartz. The transformed objects become a fossil-like index of the present moment and are configured in ways that appear as future reconstructions of the contemporary world. “Arsham’s installations challenge our perception of history as static and monolithic,” said Jonathan Odden, the High’s curatorial assistant of modern and contemporary art. “History is profoundly human, created from the objects and events each of us experiences, and Arsham’s work reminds us of these important connections. We are eager for our audiences to experience these environments and activate the spaces.”

The exhibition’s first installation will feature a selection of these cast objects in large hourglasses set on stone plinths in the High’s Anne Cox Chambers Wing lobby. Finely crushed crystals will fill each hourglass, obscuring the objects within. A performer will periodically turn the glasses to reveal the objects as the iridescent sand drains and a child’s voice projected throughout the installation describes what is being unearthed.

On the second floor, visitors will be transported into a monochromatic blue Zen garden, complete with a Japanese pagoda, tatami mats, petrified trees and ornately raked sand. Dyed rice paper and wooden joints will run along the walls, further enveloping visitors. Whereas time seems to flood the lobby installation, here the garden’s stillness evokes a sense of timelessness.

The garden will also include an element of performance, which complicates the stability of timelessness in the space. A performer wearing traditional robes will rake patterns designed by Arsham into the sand, concurrently with the performer turning the hourglasses on the floor below. An unseen narrator will address the audience, mirroring the voice in the lobby; however, here the voice is more mature, in both age and understanding of the described environment.

A cavern installation will occupy the gallery adjacent to the gardenscape. The walls include jutting stalactite-like features constructed of sports equipment, including footballs, basketballs and baseballs, all of which are cast in striking purple amethyst. As visitors enter the dimly lit interior and explore the textured walls, they will experience a space that seems historical and fabricated, Neolithic yet contemporary, which accentuates the entire exhibition’s artifice.

“Life is definitely more nuanced, but I’m not sure it’s more interesting. I feel like I’m inside a game — an overly saturated world,” said Arsham. “But now I’ve arrived at a point where I’m using color as another tool in my work. This is a unique project for me in that there is a ton of color, so I think it’s going to be really interesting to see audiences react.”