Shakespeare’s most quoted line — probably the most famous arrangement of words in the English language — can currently be read in one of its earliest printed incarnations at Emory University’s Carlos Museum. Copies of Shakespeare’s First Folio from the Folger Shakespeare Library in Washington D.C. are touring the country this year in observance of the 400th anniversary of Shakespeare’s death in 1616. The copy currently on view in a display case at Emory through December 11 has been opened, appropriately enough, to Act 3, Scene 1 of Hamlet, where the line “To be or not to be” appears. But it is not the line’s fame alone that makes this page a particularly fitting spot to open the text. When contemplating Shakespeare’s First Folio, it’s interesting to think about how close the folio came to not being. 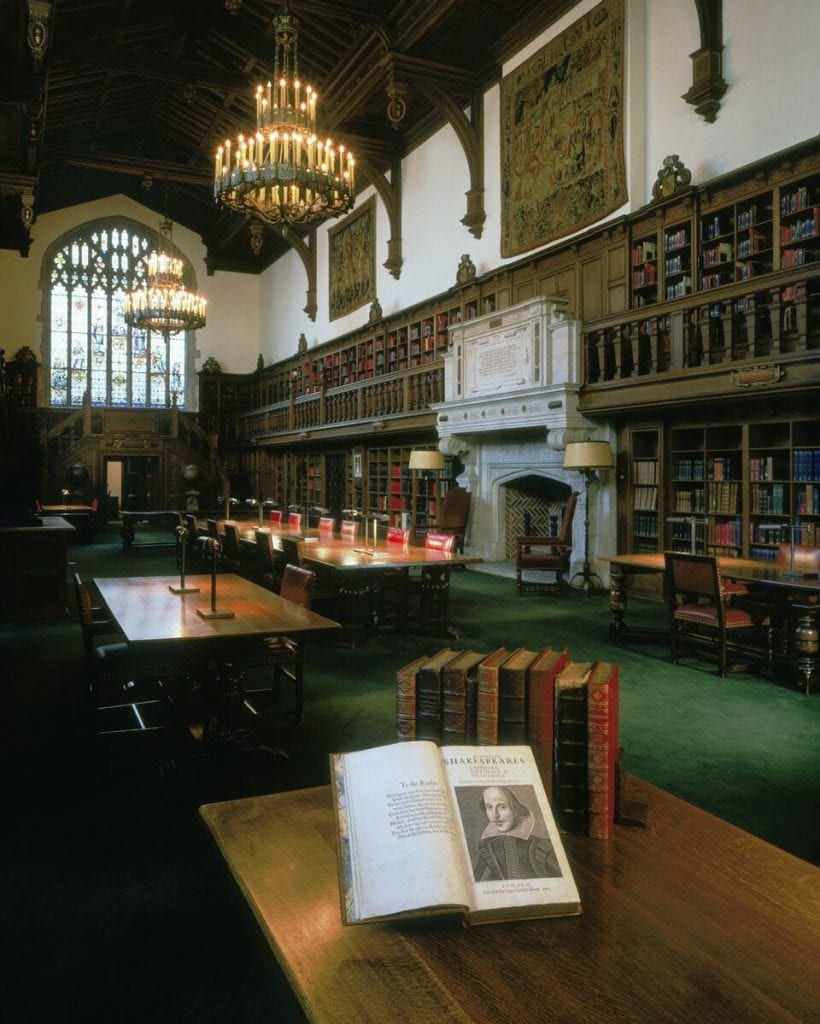 A high proportion of plays from the Elizabethan period have been lost to time because they were never printed, collected or archived, and it’s probable that a full half of Shakespeare’s plays — the 18 that had never appeared in print before the publication of the First Folio — would have joined them had it not been for the wise and loving choice of two of Shakespeare’s friends, fellow actors from his company the King’s Men, John Heminges and Henry Condell. The pair collected and published the 36 plays in a single volume in 1623, seven years after the death of their beloved colleague. Shakespeare gave his plays to the London stage, but Condell and Heminges gave them to the world.

Their monumentally significant act gets surprisingly little attention or consideration nowadays, probably because we know so little about it. We have the bare outline of facts and names, but that doesn’t really give us a satisfyingly detailed narrative about the folio’s creation or an elaborate sense of the personalities behind it.

Contemporary playwright and Decatur native Lauren Gunderson recently took on the interesting task of imagining the First Folio’s creation in her play The Book of Will, in which she fills in the details and dramatizes the interactions which resulted in the First Folio’s publication. The play had a reading at Emory in conjunction with the exhibition, and that event — along with the many other ongoing celebratory productions, lectures and screenings — are perhaps better indicators of the significance of the First Folio and the imaginative pathways it opened up than the inevitably inert display of the thing itself. In some sense, the book is no longer really even a book anymore; it’s now a glass-encased relic.

As a collector of vinyl records, it’s interesting to think about the journey that each copy of the Folio must have taken over several generations on its path from book to relic because that’s such a familiar one to me, albeit on a much smaller scale. Folios were purchased in the 17th century, and they became priceless relics in the 19th, and in the intervening centuries, they were often beloved family heirlooms, but still objects for everyday use.

On publication, a copy of the first folio set its purchaser back one pound, about $250 in today’s money. It was, I like to imagine, akin to the release of a definitive boxed set, replete with beloved classics and previously unreleased material. Once bought, the object becomes a proud purchase, then an often-enjoyed possession until slowly it becomes the prized jewel of the collection, until the final (and most bittersweet) stage, it is so valuable it can never be put to real use, now solely for contemplation and encased protection. 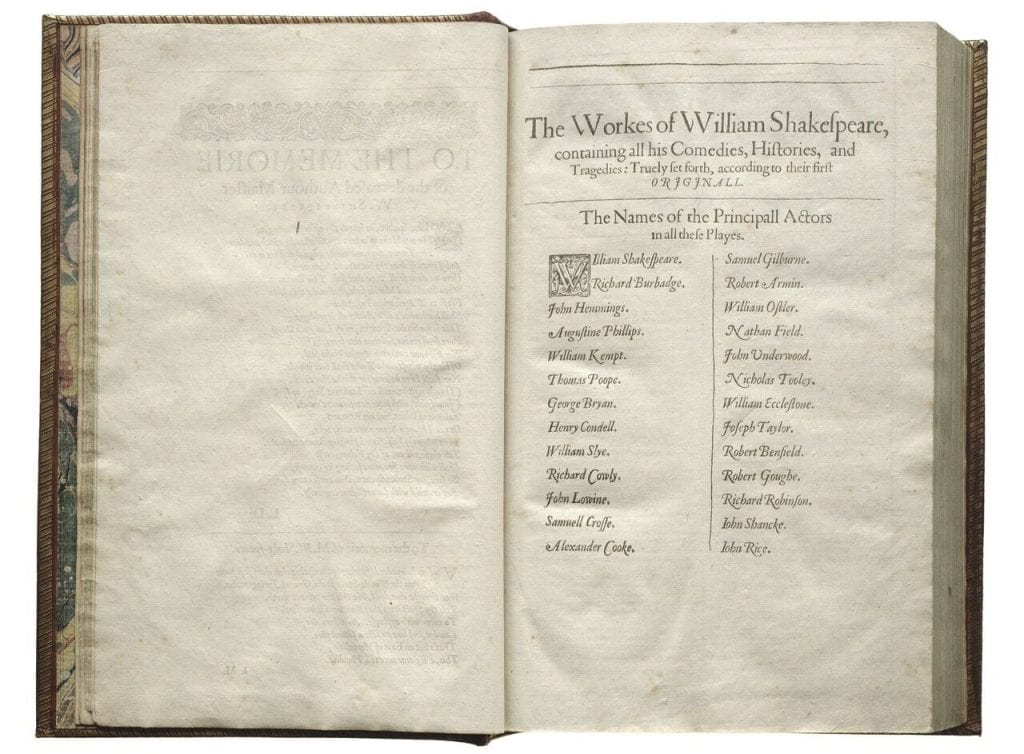 For me, one of the pleasures of examining such objects is searching for the signs of “pre-relic” history: notes scribbled in the margins, a thumb-worn page, an underline beneath an especially beloved line, an absentminded doodle, all ghostly but evocative evidence of the thing’s real life and purpose, now irrevocably in the past.

I imagine the first purchasers of the Folio (it’s estimated that about 750 were printed, of which about 250 survive) as hardcore fans longing to relive the experience of seeing Shakespeare’s work performed, completists desiring to fill out their collections and their memories with the ultimate compilation. The vividness of Shakespeare’s imagined worlds must have shone very brightly and very temptingly to potential buyers in a brutal historical moment that had no recorded music, no novels, television, movies or internet and so on.

In 1642, not long after the publication of the First Folio, the English playhouses themselves were closed down (and often dismantled for building materials) as the English Civil War began, so it wasn’t even possible to see a play anymore. The immense value of a folio must have become quickly apparent, as indicated by the subsequent publication of the slightly wonkier second, third and fourth folios (some contain plays not by Shakespeare), copies of which are also on display at Emory.

One thing that struck me about seeing the First Folio at Emory recently was its legibility. Certain factors — the four centuries of age, those funny long “s’s” that look like “f’s,” the smallness of the print crammed together for economy’s sake, the inherent difficulty of reading Shakespeare — led me to expect that it would be hard to read, that the text would seem antiquated, foreign and distant.

But the text is remarkably plain and legible. Even behind glass, the words pop off the page, and you can still see how the weight and shape of that book would make it a pleasure to hold and flip through for hours at a time. The text doesn’t look at all static, old or fusty but modern and alive. In contemporary copies of Shakespeare we might consult, the text is at many removes from the original context — an actor standing on the stage of the Globe Theatre speaking as Hamlet — but here that original intent seems thrillingly close, only a couple steps away. There’s a fresh sense of simplicity, proximity and intimacy to the words when you see a First Folio, even if it’s just a single page of it behind glass.

Seeing the First Folio in person also helps take Shakespeare out of the dreary role of monumental, inaccessibly great, sainted, canonical genius and casts him in more appealing, human proportions. He becomes the underdog, the creator of disposable live entertainments that had an unlikely and unexpected survival, the super-curious writer who was also a person, one who wrote plays to get by as much as anything else.

He was an otherwise ordinary man from the nothing town of Stratford upon the nowhere river of Avon, creating himself by creating imaginary people’s inner lives, earning his daily bread by firing the imagination and intellect of his audience. Shakespeare’s sonnets made clear, as the form often did, that the poet believed the work would endure beyond his lifetime, but I can’t think of a parallel moment from the plays, where the playwright confidently asserts that his characters and situations were for the ages. Such an opinion would be much more difficult to insert into a drama than into a poem, but there seems little reason to believe that Shakespeare foresaw this later life of his plays.

But survive they did, and though the words “timeless,” “enduring,” and “immortal” are often applied to Shakespeare’s plays, it’s interesting to speculate, in 2016, if this will be the case moving forward into the next four centuries. He’s had a great run for four hundred years, but what might the next four hundred hold for Shakespeare, and for us? 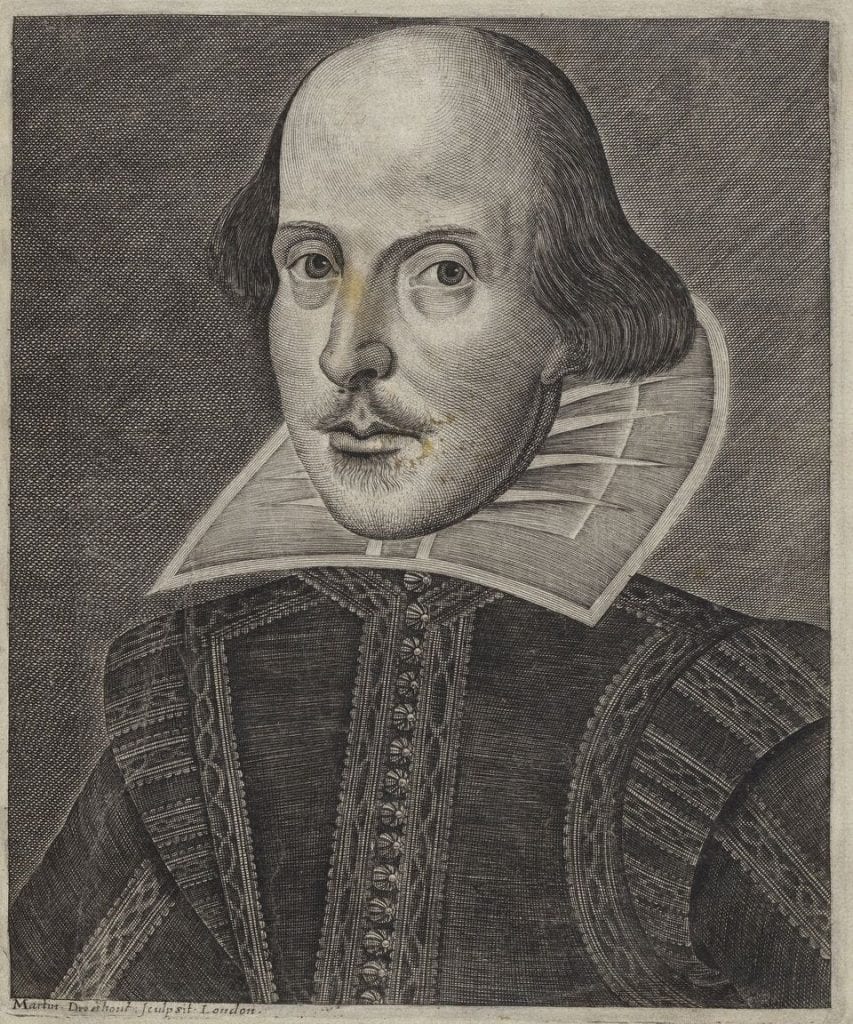 The theater itself is neither timeless nor universal; unlike other art forms such as painting and sculpture, theatrical performance has not existed in every culture at all times throughout human history. It tends to come and go in flashes. Recent political events distressingly point to the possibility that we ourselves as a species might not endure into the next centuries, and Shakespeare certainly won’t make it if we don’t.

When the scattered survivors of cataclysmic annihilation aren’t siphoning gas or battling in the desert, they may very well still paint and sculpt things, even if it’s just to decorate their chainmail, but it’s unlikely they’ll take the time to mount a new production of Twelfth Night. To be or not to be, something either exists or it does not, with nothing we know about in between.

As a theater critic, a reporter from the front lines, so to speak, I can also relay back the bad news that, in spite of many hopeful signs and valiant efforts, it’s entirely possible that, even in the best of political and environmental circumstances, theater may not survive as a viable art form into the next few centuries; the culture is changing along with the climate. Appreciate the rare miracle of survival — theater’s, Shakespeare’s, your own — while you can. If our dismal new world is one shaped by “post-truth,” where we can’t even agree on what constitutes an objective fact, perhaps the fictive world of theater, even as it diminishes, will be the lone place where we’ll be able to seek out and find some sense of shared truth.

Hamlet became the Shakespeare play of the 20th century because it presciently asked so many of the questions that came to the fore then. If I had to make a prediction, I’d say that The Tempest will become the Shakespeare play of the 21st. Anyway, if I could reach into the glass case and turn the page, I’d flip it to Prospero’s strangely comforting, paradoxically hopeful but apocalyptic speech of Act 4, Scene 1, and the holy relic could journey into the future with us that way:

You do look, my son, in a moved sort,
As if you were dismay’d: be cheerful, sir.
Our revels now are ended. These our actors,
As I foretold you, were all spirits and
Are melted into air, into thin air:
And, like the baseless fabric of this vision,
The cloud-capp’d towers, the gorgeous palaces,
The solemn temples, the great globe itself,
Ye all which it inherit, shall dissolve
And, like this insubstantial pageant faded,
Leave not a rack behind. We are such stuff
As dreams are made on, and our little life
Is rounded with a sleep.