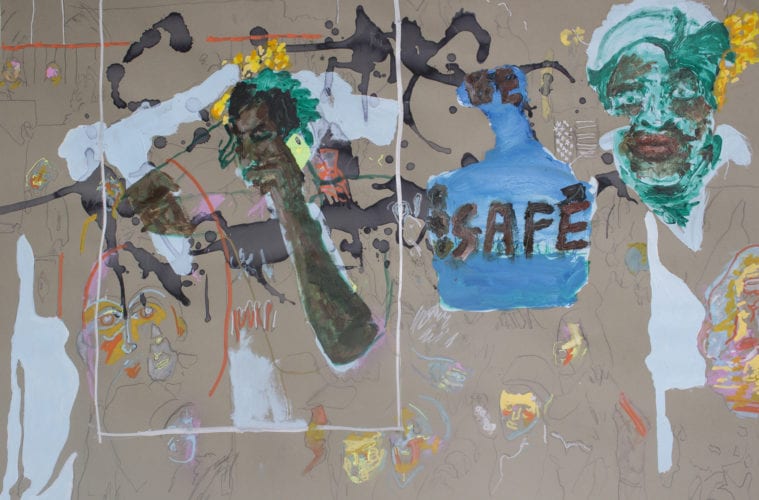 Portion of a Conversation With Mom (2018), by MINT Leap Year resident Caleb Jamel Brown, is made of acrylic, graphite, oil and dye, and measures 28 x 30 in. (All images courtesy of the gallery)

Art certainly has the capacity to teach us a thing or two about ourselves. Take MINT Gallery’s Duplexity, for example. The exhibition, on view through May 23, conveys themes of confrontation and fortitude in the midst of a national discourse that questions the very essence of personhood. Artists were asked to submit work about the relationship between love and hate and how they thrive or divide. They responded to a quote from contemporary American poet Aja Monet: “Hatred doesn’t just hurt the people being hated, it hurts the people housing the hatred.”

Each artist seems to speak to two things: being alone with one’s thoughts and actions, and deciding how to channel them when interacting with others. Duplexity will disturb your emotional gauge by asking what provokes you, why and whether you’ll identify and mobilize, or assimilate, or hide.

As Roxane Hollosi’s Choice Conscience Consequence 1 and 2 (2019) demonstrate, taking a stand isn’t always defiance. It can be resolve. Her drawings hang side by side but don’t connect physically. They examine how singular statements define self.

Warm colors, shapes and shadows fuse with abstractions of the female body. Twisted wire hangers ring a silent alarm on the national abortion debate. The artist’s handwriting appears in the words of the piece’s title, shining a light on the “victimization” of those who have to make a choice. “It’s not black or white, or right or wrong,” Hollosi says. “Sometimes you have to save yourself.” There’s an energetic flow to Duplexity. Multiple pieces by the same artist aren’t grouped together, which lets viewers engage independently with each work. The exhibit showcases the diversity of life in various ways. Black womanhood inspires kinship through “simple everyday experiences” in Ariel Dannielle’s 7 Days of Cuban Rum (2018). Hand-cut mixed-media shows the stigma of female anxiety in several pieces by Hannah Pasedag, including How Can I Think With All This Noise? (2018).

Even thread used in different forms displays the artists’ versatility. Examples include cyanotype and embroidery thread in Hannah Burton’s Ode to Ana Mendieta (2019) and inkjet print with hemp twine in Sydney Daniel’s “sewn drawing” paintings — Sam (jollyranchers), also 2019, is one.

Men also make powerful statements here. Y. Malik Jalal’s large wall hangings use found objects and resonate with personal and cultural identities (he calls them “mythos narratives”). He stirs conscious and unconscious thoughts in Thunder Is a Woman With Braided Hair (2018), using a blue barrette and material with Godzilla and Olympic rings on fabric. Within the Space of Seven Breaths (2018) uses faded Cash 3 Lotto tickets and self-adhesive mailbox lettering. Desmond Beach’s 2018 This Is America Series (1) and (2) uses digital photographs inspired by African American events, from the Middle Passage to mainstream media. Y. Malik Jalal’s 2018 wall hanging Thunder Is a Woman With Braided Hair is made of found objects and fabric. It measures 72 x 72 in.

Caleb Jamel Brown, a MINT 2019 Leap Year Residency artist, shows four pieces, including a painting titled Portion of a Conversation With Mom (2018). His preoccupation with sketched faces and claims of safety are scrawled in a disfigured figure with “BE” atop the mind and “SAFE” across the heart. You’ll be drawn in.

Expect to see each artist’s work in Duplexity in the context of identity and life’s double standards. From lithography, serigraphy and mailing labels on plexiglass to collage and more, LaTrice is right when she says, “Even the walls are in conversation.”