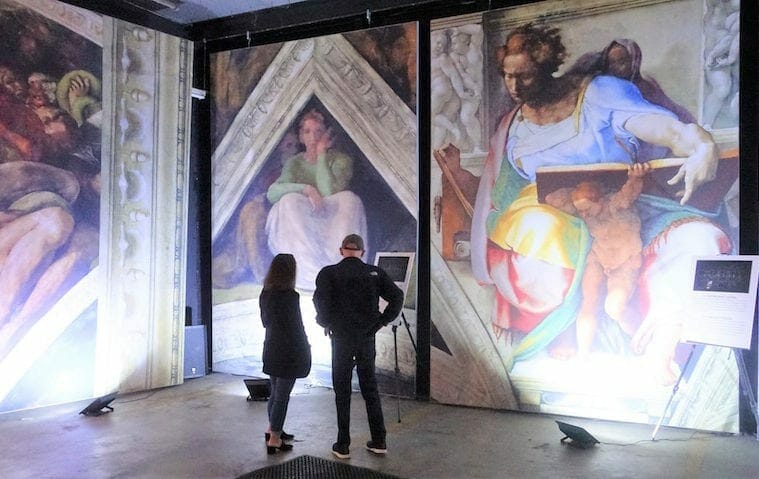 Like most Americans, Atlantans have been immersed in home quarantine for more than a year. Now presenters of “immersive experiences” centered on the work of the two great artists want to transport the stir-crazy with presentations exploring classic art with 21st-century production values.

Michelangelo’s Sistine Chapel: The Exhibition opened last month at Westside Cultural Arts Center and van Gogh: The Immersive Experience makes its North American debut May 19 at the historic 27-acre Pullman Yard in Kirkwood, commanding the 20,000-square-foot, two-story Building 1. The Michelangelo is on view through May 23; the van Gogh through the end of the year.

Feverishly marketed on social media, the van Gogh event boasts advance sales of 110,000 tickets, suggesting that Atlantans truly “can’t wait to Gogh,” to borrow one of the pun-nier advertising lines. Inside the van Gogh immersive experience featuring work by the Dutch post-impressionist (1853-1890).

Michelangelo’s Sistine Chapel is off to a quieter start but is intended as a more intimate experience, with admission to the 8,500-square-foot exhibit space scaled for COVID-19 safety.

Though the language of the “sell” by presenters of both events has more than a little in common, these “art-tainment” (to coin a phrase) shows are quite different from each other.

Presented by the European entertainment outfit Exhibition Hub in partnership with Atlanta-based Immersive Hub, the van Gogh will place guests inside the painter’s canvases via 360-degree digital projections. Light and sound contribute to the sense of being enveloped in a virtual-reality experience.

Produced by Los Angeles-based Special Entertainment Events, or SEE, the Michelangelo presents 34 near-life-size reproductions of the artist’s Sistine Chapel frescoes. Instead of technical razzle-dazzle, it leaves the wow factor to Michelangelo’s work itself. His reproduced art is displayed up-close on the walls and low ceilings of the Westside Cultural Arts Center instead of across the 68-foot-high ceiling in Vatican City. Music and dramatic lighting are meant to enhance the experience.

“We could have done a projection, too,” SEE CEO Martin Biallas said on a recent visit to Atlanta. But with van Gogh, you’re basically transformed into the painting, where here you’re watching it up close. When you watch a projected image up close, it does not give you the clarity and the detail that you have here.”

Putting Michelangelo reproductions at eye level was Biallas’ brainstorm after craning his neck to catch the real thing in Italy years ago. To him, that was a mixed experience at best.

“It was not what I thought it would be, was not that pleasant,” he recalls. “Not because of the art of course, but because of the experience to get in with the long lines. It was in the summer, and you’re crammed in with 2,000 people. A lot of noise, lots of militant guards watching to make sure you don’t take photographs. And you look up and it’s beautiful, but the frescoes are almost like stamps, they are up so high.”

At Westside Cultural Arts Center, where you can’t help but smile at the incongruity of Michelangelo’s Sistine Chapel advertised on its modest marquee, a guest can extend a finger like Adam, nearly touching God’s digit, in “The Creation of Adam” reproduction. Biallas approves of selfies, especially in front of that piece. A view of the Sistine Chapel’s ceiling in the Michelangelo experience. (Photo by Nick Wolaver)

Based on the robust advance ticket sales, Atlantans are all in.

“This is the most excitement and the greatest response to an opening that I have ever seen in my 20 years of producing traveling entertainment,” said John Zaller, president of Immersive Hub.

Zaller cited factors including “a pent-up demand for this type of immersive experience in COVID-safe and family-friendly environment,” and he credited the persistent marketing push — digitally and “on the ground in Atlanta.”

There’s a bull market for van Gogh extravaganzas, which first made a splash in Europe more than a decade ago. Van Gogh Alive was America’s first, debuting at the Dali Museum in St. Petersburg, Florida, in 2011. When Van Gogh: The Immersive Experience opens in Atlanta, it will be one of five similar shows being seen around the country.

The producers of Atlanta’s van Gogh and Michelangelo experiences both have credits that toggle between art and entertainment. Exhibition Hub also presents exhibits that range from The Terracotta Army and the First Emperor of China to The Art of the Brick: DC Superjeroes. In addition to “Michelangelo,” SEE’s shows have ranged from Star Trek – The Tour to The Museum of Failure, spotlighting 100 product innovations that tanked.

Both companies have multiple “experiences” touring the world even as traditional museums struggle to survive the pandemic.

American Alliance of Museums president and CEO Laura Lott painted a dim picture for these institutions in a February statement. “Museum recovery will take years,” she predicted. “and without a sustained congressional lifeline, I fear that many museums will be lost forever.”

For his part, Michelangelo showman Biallas rejects the notion that his touring exhibition competes with museums.

“Absolutely not,” he says. “We’re obviously [exhibiting] replicas because we couldn’t haul the original around. You’re getting a perspective that not even a pope has seen.

“We’re just not trying to present original art like a museum does,” he says. “We’re giving people an experience.”