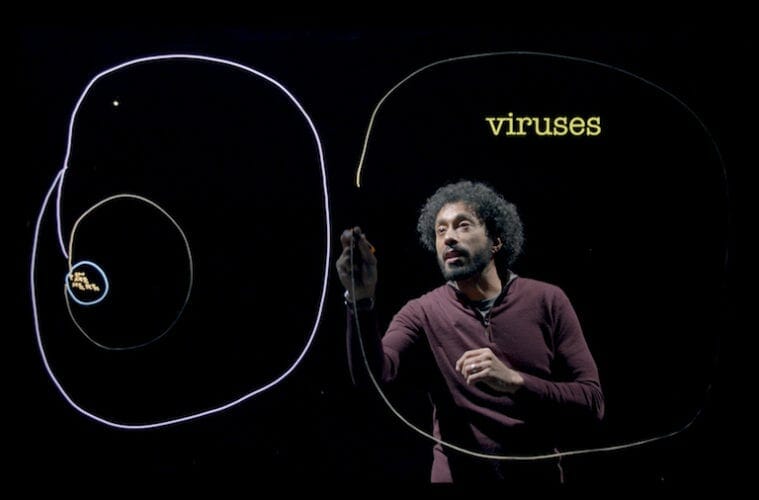 William DeMerritt as virus hunter Nathan Wolfe in "The Catastrophist." (Photos courtesy of Marin Theatre Company and Round House Theatre)

Review: Down a rabbit hole of science and art with Gunderson’s “The Catastrophist”

“Theater is not science, that I know,” says the sole character in Lauren Gunderson’s The Catastrophist, an award-winning virologist closely modeled on her husband, Nathan Wolfe.

“It’s the opposite,” he says. “She makes the ending whatever she wants it to be. I can’t do that. That would be scientific fraud.”

With that, audiences enter a dual existence, one in which science and art are allies and combatants, friend and foe, engaging in sometimes gentle, sometimes confrontational ways. The Catastrophist, which mostly moves fluidly between scenes, can alternately feel like a college lecture or like a rabbit hole of joyous and/or excruciating memories.

The new virtual drama does feel like real theater, which is a happy relief in the age of Zoom readings that too often come off as dull. It also has the benefit of being filmed, on a real stage, in a real theater, so we feel the hushed magic of a cool, quiet, dark space. Plus we get extreme closeups and interesting camera angles.

The drama makes science palpable, exciting and scary. It’ll expand your brain before you know it (good for us non-science geeks). Still, it’s a formidable challenge for one actor (the excellent William DeMerritt) to hold our attention for 80 minutes. The mind can wander.

The Catastrophist streams through March 21 under the Theatrical Outfit umbrella ($26.40; $39.60 family/pod). It was commissioned by Marin Theatre Company in Mill Valley, California, which premiered it in partnership with Maryland’s Round House Theatre, and is now letting other regional companies present it. In the small-world department, it’s directed by Jasson Minadakis, who led Atlanta’s Actor’s Express in the early 2000s.

The playwright and the virus hunter are a formidable duo. The Decatur-born, San Francisco-based Gunderson has been the most-produced playwright in America for three of the past four seasons. Wolfe has worked in Cameroon, Malaysia and Uganda, studied bird flu, swine flu and Ebola. He does TED Talks and wrote a book, 2012’s The Viral Storm: The Dawn of a New Pandemic Age. A year earlier, he was named to the Time magazine 100 list of the most influential people in the world.

“The Catastrophist,” Gunderson says in a video on the Marin website, “is a time-twisting, memory-jumping play about family, memory, mortality and viruses.”

That framework is helpful to remember as the narrative swoops from boyhood memories to the jungles of West Africa, from the births of children to the death of a parent, from personal achievements to professional crises. Because “The Catastrophist” was filmed in an empty theater, William DeMerritt (who plays Nathan Wolfe) was able to use all parts of the space.

It is not about COVID-19, but as DeMerritt’s Nathan says: “If you can predict pandemics, maybe you just might be able to prevent them.” The action predates COVID but does deal with the lackadaisical response that met his work on the 2014 Ebola outbreak.

Two weeks into COVID-19, Minadakis asked Gunderson if she’d ever considered writing a play about her husband. She shut the idea down with a laugh, but it had taken root, and she couldn’t let it go. She has long had an affinity for writing plays about scientists — Ada and the Engine, Emilie: La Marquise du Châtelet Defends Her Life Tonight, Silent Sky and The Half-Life of Marie Curie, among them. She and Wolfe met when she interviewed him for background on one of those science plays.

Although DeMerritt is the only actor onstage, the play actually has four characters — the scientist, the husband, the playwright and the wife — who volley verbally and emotionally with DeMerritt often speaking what the playwright-wife might say to him in any given situation. These personal moments, often delivered with a wry smile, are among The Catastrophist’s best.

Empathy, Gunderson says, is one of theater’s superpowers. It certainly is here.