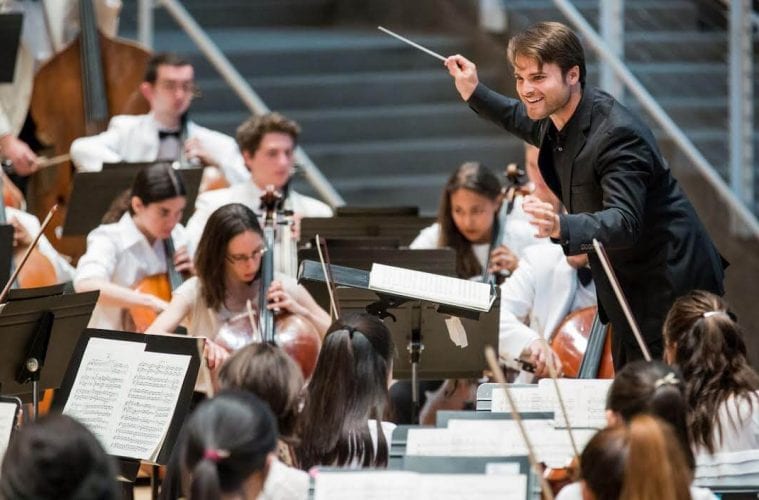 Mulligan was awarded the Aspen Conducting Prize after studying with ASO music director Robert Spano as a fellow in the American Academy of Conducting at Aspen from 2013 to 2014. He subsequently served as the festival’s assistant conductor in 2015 and again as a guest conductor in 2016. 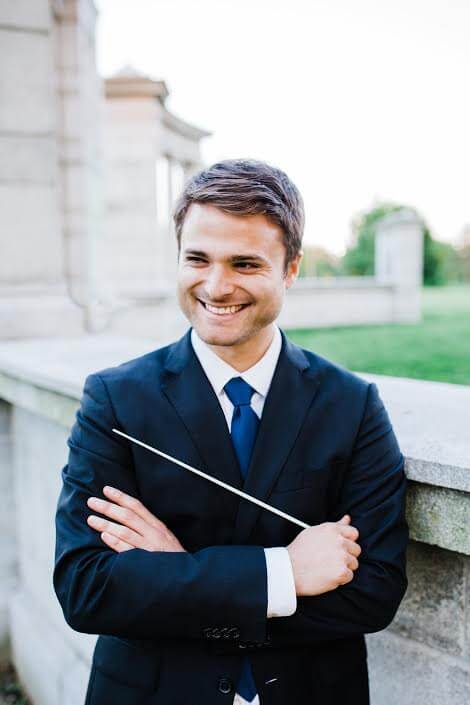 One of Mulligan’s roles is to serve as Spano’s “cover conductor,” his understudy.

In a recent conversation with ArtsATL, Spano said of Mulligan: “What I find so impressive is his capacity to communicate from a sincere, genuine depth of emotion that’s not theatrical or put-on. That’s a quality that is very powerful in a performer.”

ArtsATL recently sat down with Mulligan for a chat about his new roles with the ASO.

ArtsATL: You have a background in both violin and conducting. How did you get started in music, and what led you to choose a career path as a conductor?

Stephen Mulligan: The story goes my dad, who is a violinist, posed the question to my brother and me, [when] I was five and he was seven: “Would you like to learn the violin or piano?” So it wasn’t really, “do you want to play an instrument” [or] “what instrument do you wanna play?” It was the violin or piano. My dad was, and is still, a role model for me. I think it was probably easy for me to want to play violin. That’s how it started. I grew up playing the violin, and I was in the youth orchestra in high school. It was an all-strings ensemble, students from Maryland and Pennsylvania.

ArtsATL: Do you have a similar story about how you got into conducting?

Mulligan: I don’t have a story about, like, lining up [conductor] action figures like sports action figures, or conducting recordings when I was little.

Mulligan: No, nothing like that, but I was very curious about it from young age. I was playing in a string orchestra and singing in a chorus in high school. I also went to my dad’s concerts at the Baltimore Symphony. I was really curious about what exactly that kind of leadership was like, and, of course, as a violinist, I would sit in there in youth orchestra and think [things like], “I bet I could get this passage to work” or “I think I know what we need here” or “I wish that were softer there.” So I was always thinking about the conductor’s perspective, even before I had any idea what that was like.

ArtsATL: Your collegiate studies were in violin, too, as well as conducting. When did you reach a turning point where you said to yourself, “I’m going to be a conductor”?

Mulligan: I think I knew longer than I admitted to myself. I was expressing interest since high school, but I hadn’t really been admitting it to myself or to my family or to anybody. At some point you certainly have to make it known. When I was a freshman at Yale there was an [extracurricular] orchestra called the Berkeley College Orchestra. It’s student-led. Kensho Watanabe was the director. He is now assistant conductor at the Philadelphia Orchestra and also an amazing violinist. He had assistant conductor auditions, so I went and I took it. He gave me the post. That was the declaration to the world that I was interested. But still at that point I think it wasn’t really clear that I would be able to pursue it professionally. I was still just trying it out.

Mulligan: If somebody gave me an assignment, I would need a few weeks of practicing. It’s been really busy since I got here, and study of scores takes three, four, five, six hours a day. Violin is not a priority right now. I was playing the violin still in Winston-Salem because the youth orchestra schedule is very similar [to here], but the orchestra is a part-time per-service orchestra. The amount of scores that I had to learn was significantly lower, so I could practice. 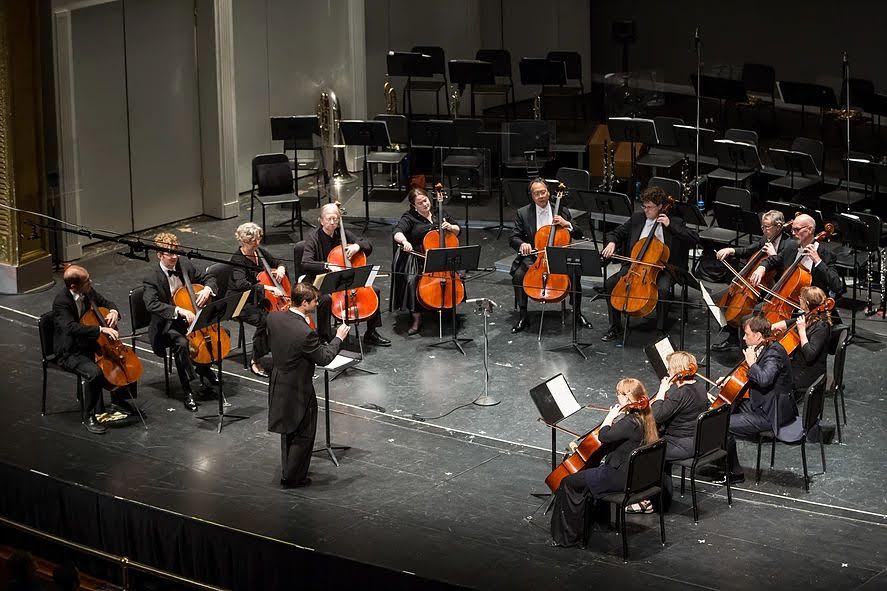 ArtsATL: How did you and Robert Spano meet and first begin to work together?

Mulligan: I had gone to Aspen in 2008 as a violinist and went to a few of the American Academy of Conducting concerts. David Zinman was the teacher [and festival music director] at that point. This was right around the time that I got that Berkeley College Orchestra post, so I was starting to think about how I would get into Aspen as a conducting fellow. It wasn’t until 2013 that I applied and met Robert Spano. I studied with him for two years as a fellow [and] then the following year as his assistant conductor.

ArtsATL: An important aspect of your work as ASO assistant conductor is your role as music director of the Atlanta Symphony Youth Orchestra. The orchestra’s first concert is scheduled for the first Sunday in November. What are your aspirations, goals and sense of direction for that young orchestra? 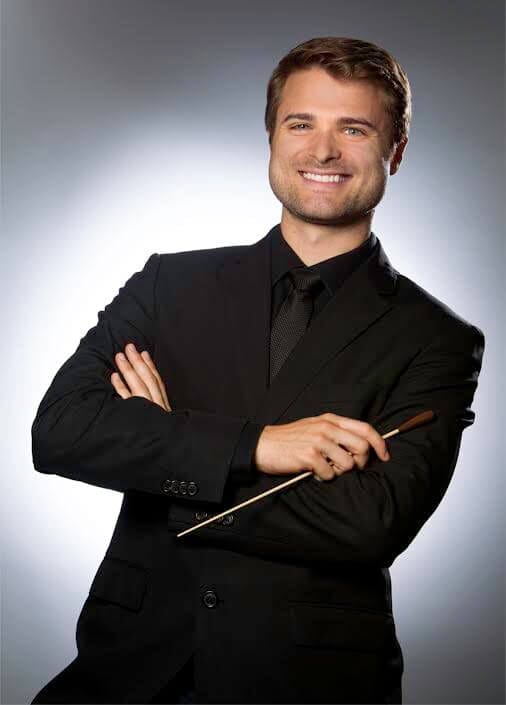 Mulligan: I’ve had the luxury of a whole year planning. [Former assistant conductor] Joe Young graciously let me have one of his rehearsals last year to get a sense of what their abilities are. They had just played a concert, and I had their very next rehearsal. I didn’t have an idea of what their ability level was going to be, so I went in there and things went from sight-reading to great quickly. I was so glad to have that rehearsal because it gave me the confidence to program difficult music.

I also spoke with the ASO musicians who coach them as to what would be good [and] got together with the education staff. We had anywhere from 40 to 50 pieces on sticky notes and just arranged them in various permutations to come up with programs. It took many months, but I’m satisfied — especially with this first concert — that it’s the right difficulty level. The risk was Strauss’ “Death and Transfiguration,” but it’s coming. We’re gonna get it. That’s the piece that I went back and forth on. The trick is to find music that will stretch them and inspire them and to show them that you believe in them without giving them a job they can’t rise to because of stamina or technical issues.

Another thing that we’re doing this year is having them sight-read things that we’re not doing on programs to help them become more skilled “orchestra problem solvers.” One thing about a professional orchestra is that the instant something is not right there is an immediate reaction. Sometimes in a youth orchestra the players aren’t necessarily aware of “how do we fix this?” When you rehearse the same piece over and over again things get fixed, but sight-reading presents this challenge of “let’s make it through” and “I challenge you to be a good enough listener and good enough problem solver to help keep it together” despite the fact that the orchestra hasn’t seen it before. That’s one thing that I’m looking to refine in their sensibilities about what it’s like to make music together in an orchestra.

ArtsATL: Speaking of being prepared to just step in, one of your tasks as assistant conductor is to be able step in as cover conductor at the last minute. That seems a daunting responsibility, especially given the sheer volume of music you are obliged to learn.

Mulligan: I think of [Verdi’s] Otello. It took all summer [to study], and I could say that I remember it, but could I do it tomorrow? There are some pieces that I’ve done in Aspen or that I’ve done before that would be okay and others that are daunting. I don’t know how to express it, but it’s a major draw to the job, to be honest. I believe in the cover system. They don’t have it in Europe as frequently. They don’t always have assisting conductors, certainly not as full-time employees. But I believe in the system because it puts enough pressure on you that you put in work. I have a bigger repertoire now than I might otherwise have as a 29-year-old because I’ve been a cover conductor. I’m having to learn X number of pieces “just in case.” It’s a really good education. Of course it can also be nerve-wracking, but ultimately I believe in it.