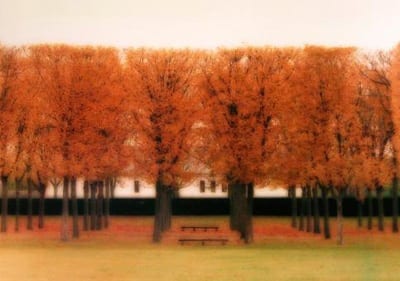 Jerry Cullum·February 7, 2010
Art+Design
A misleading term, “self-taught” is too often used as a substitute for more troublesome names for vernacular (a.k.a. folk) art. The term needs to be rescued for larger uses. “Self-taught” certainly isn’t a synonym for “naive” or “outsider”: Self-taught artists are often highly educated and extremely sophisticated. They just didn’t go to art school, and got their art smarts another way, including residencies at significant art colonies. Anna Walker Skillman has juxtaposed two photographers at her Jackson Fine Art gallery who illustrate this almost ideally. The two exhibitions also show how the currently competing media of film and digital photography can yield remarkably complementary results. 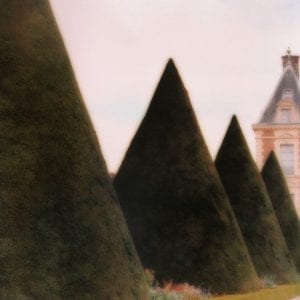 Lynn Geesaman, trained in the sciences rather than fine arts, creates distinctly visionary film-based photographs that turn formal gardens into spaces of dream. (Her “Parc de Sceaux” is at left.) Jack Spencer, a former painter previously noted for masterly film-based black-and-white work, has turned wholeheartedly to the resources of digital media, producing very different styles of prints that explore the painterly possibilities of what’s already in the photographs, whether of Cumberland Island, St. Augustine beaches, or Xenia, Illinois.
Spencer in particular praises the independence and willingness to experiment of those who weren’t browbeaten in school into doing things a certain way. 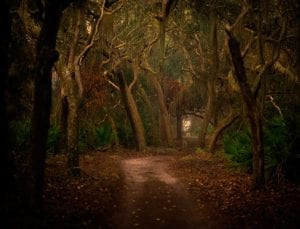 Both artists demonstrate that, whether produced by darkroom or digital techniques, truly original bodies of work combine what the photographer’s eye has seen and what he or she has done to bring that initial image to the viewer’s eye. The photographs in both these shows would have been powerful works of art if the same scenes had been shot after the manner of Ansel Adams. They would, however, have been very different works of art.

Spencer’s work at Jackson Fine Art includes the almost naturalistic saturated color of his 2007 series from Cumberland Island (“To Goats Way,” above), which in many cases could be mistaken for film-based color photography. But the 19th-century look of some of a scratched-looking sepia print is the result of a digital overlay of a pattern he created and scanned into his software. And though the weather was romantically misty during his brief stay on the island, the rich golden tones of many of the photographs are entirely a result of digital manipulation. 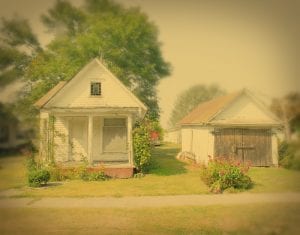 Spencer’s St. Augustine beach series of 2009 moves toward pure painterliness, beginning with more or less naturally colored pictures of beach walkers and ending with vertical stripes of different shades of yellow and blue that are more like Abstract Expressionist paintings. This turn toward unnatural coloration began earlier with “Summer in Xenia, Illinois,” a 2007 photo (at left) from the “Americana” series that in its washed-out pastels and selective blurring looks more like a watercolor than a photograph.
Strangely, Geesaman achieves a similarly dreamlike effect by starting from opposite presuppositions. Her square format prints of formal gardens frame a geometry that is already artificial, created by generations of European garden makers. The allees of trimmed trees or vistas of long, meticulous lawns bounded by contained shrubbery are photographed with a particular film stock and camera and lighting conditions that require very little extra darkroom technique to turn these diffuse images into saturated-color moments of what Geesaman’s husband describes as “painterly luminescence.”
Consider, for example, “Parc de Sceaux, France” (below), in which the vertical zip (as Barnett Newman would have called it) of sky folds almost seamlessly into the faintly tinted space beneath. The left side of the photograph is shaded slightly toward pink to match the vividly colored tree, while the subdued tones of green background of the right side make that segment almost monochromatic. 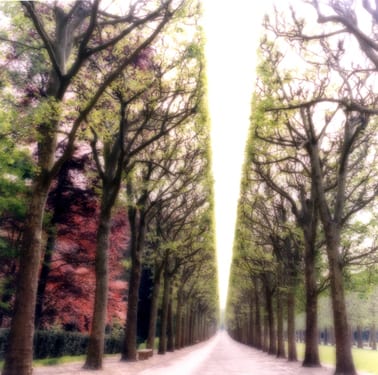 To repeat, all the photographic technique would have come to very little had Geesaman not been sufficiently perceptive to discern the combinations of form and contrasting color that turn an existing order into something just short of emotional magic.