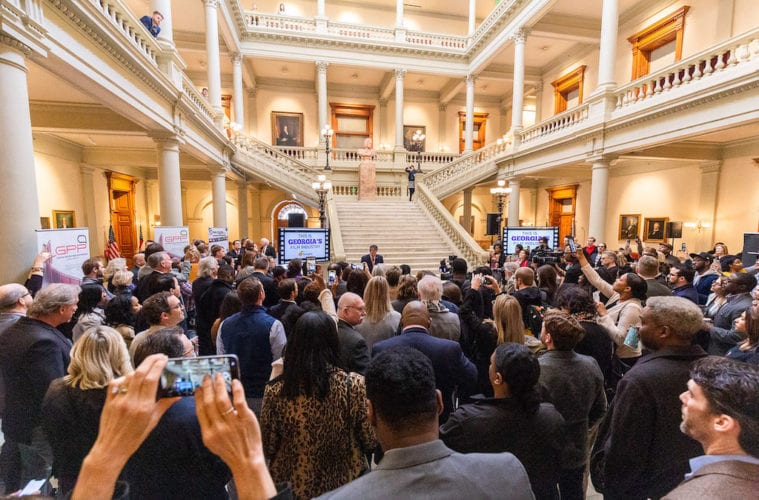 Just days before actress Alyssa Milano called for the film industry to boycott Georgia in protest of HB 481 -- a bill Governor Brain Kemp promised to sign into law -- the governor spoke at Georgia Film Day about the state's continued commitment to the film and TV industry. (Photo courtesy of Brian Kemp, Office of the Governor)

Legislation that would ban all abortions in Georgia after the sixth week of pregnancy has again placed Georgia’s booming film industry under threat of a boycott.

The legislation — HB 481, or the “Heartbeat Bill,” which would ban all abortions after six weeks and require victims of rape or incest who become pregnant to file a police report in order to obtain an abortion — was approved by the Georgia House Friday and will now go on to Governor Brian Kemp, who plans to sign and enact it into law.

A similar law was recently passed in Iowa but didn’t survive a constitutional challenge in court.

Last weekend, actress Alyssa Milano — currently in Atlanta filming the Netflix series Insatiable — again called on Hollywood to pull productions from the state if the heartbeat bill passed the legislature.

Kemp, however, campaigned on a pro-natal platform, and came out in support of the Heartbeat Bill.

On Friday, Kemp released a statement that praised the lawmakers for “their undeniable courage” in passing the bill. “Georgia values life,” he said. “The legislature’s bold action reaffirms our priorities and who we are as a state.”

Ironically, on March 19, just days before Milano’s tweet, Kemp took to the podium at the capitol for Georgia Film Day, where he spoke about his continued commitment to an industry responsible for bringing in over $9 billion in revenue to the state in 2018. More than 450 productions were filmed in Georgia last year, to say nothing of the countless niche industries that exist in the state as a result of the film tax credit. Georgia leads the nation in growth in arts and culture employment, due mostly to the motion picture industry, according to information by the Metro Atlanta Chamber.

The passage of the Heartbeat Bill now pits Kemp’s social agenda against the state’s economic agenda. 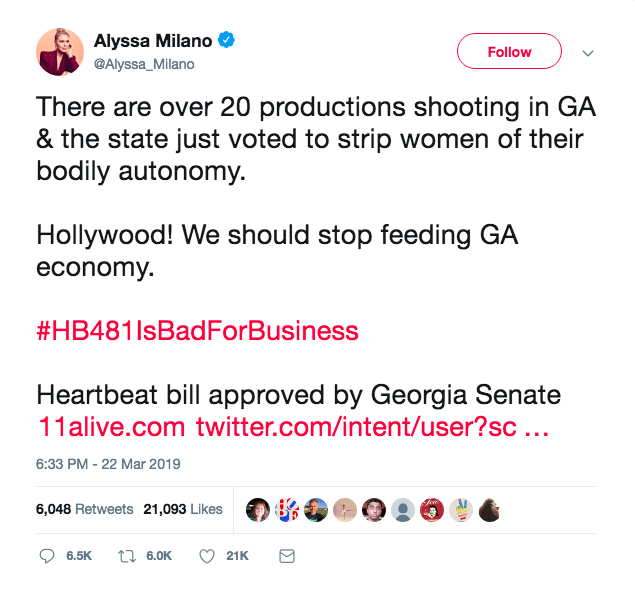 On March 23, actress Alyssa Milano took to Twitter encouraging the film industry to pull its productions from the state.

Prior to the bill’s passing, members of the film industry began speaking out publicly against the legislation.

The letter states in part, “As men who identify as small-government conservatives, we remind you that government is never bigger than when it is inside a woman’s body or in her doctor’s office. This bill would remove the possibility of women receiving reproductive healthcare before most even know they are pregnant and force many women to undergo unregulated, hidden procedures at great risk to their health. We can’t imagine being elected officials who had to say to their constituents, ‘I enacted a law that was so evil, it chased billions of dollars out of our state’s economy.’ It’s not the most effective campaign slogan, but rest assured we’ll make it yours should it come to pass.”

It goes on to note that while they want to keep their productions in Georgia, they intend to do everything in their power “to move our industry to a safer state for women if HB 481 becomes law.”

Film studios and production companies have yet to threaten a boycott against filming here, but other industry groups have penned letters and statements that speak out against HB 481, including the Writers Guild of America East & West, a labor union that represents film and television writers. 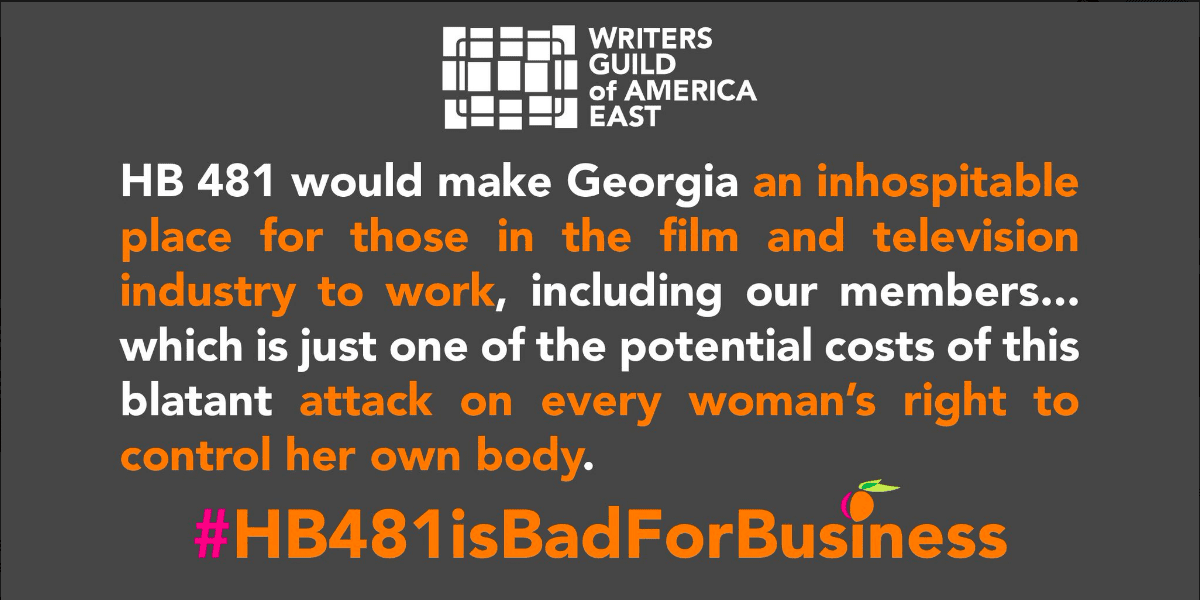 In its press release, the Writers Guild called HB 481 “a draconian anti-choice measure” that would make Georgia an “inhospitable” place for the industry.

“It is entirely possible that many of those in our industry will either want to leave the state or decide not to bring productions there,” the press release states. “Such is the potential cost of a blatant attack on every woman’s right to control her own body. The cost would be most deeply felt by the residents of Georgia — including those who directly work in the film and television industry, and those who benefit from the many millions of dollars it pours into the local economy.”

Indeed, many of Georgia’s film industry locals have also spoken up in opposition to the bill.

A letter circulating on social media and signed by local art directors, location managers, set dressers, production managers, prop assistants, photographers, wardrobe stylists, craft service workers and more — all of whom have livelihoods that would be directly impacted should film and television leave the state — calls on some of the biggest production companies in the world to speak out against HB 481.

The letter, addressed to Sony, Netflix, Disney, Marvel, HBO and Universal Pictures, states in part: “As employers to hundreds of women and people who are able to reproduce, it is essential that your employees are able manage their bodies and have the ability to make critical life decisions on their own. . . . The studios must demand Georgia listen to the state’s medical experts and stop House 481 from becoming law.”

The letter is signed “Georgia Film and Television Workers.”