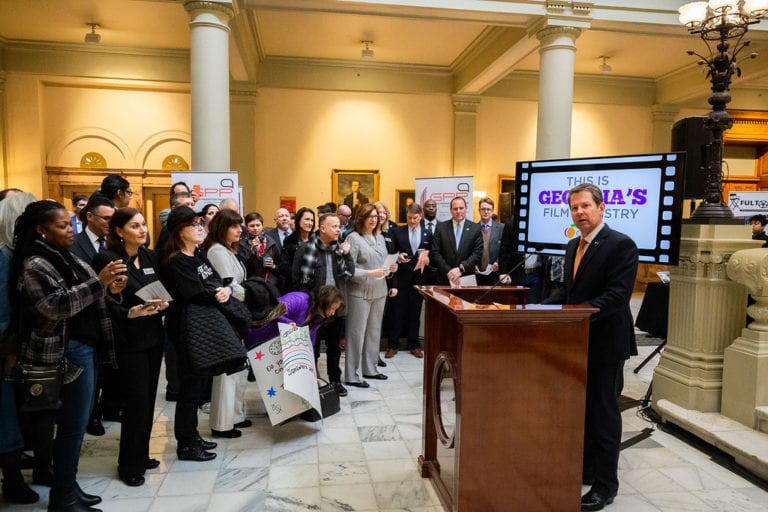 At this year's Film Day at the Capitol, state leaders highlighted the continued success of Georgia's film and television industry, which brought in over $9 billion in 2018. (Photo courtesy of Brain Kemp, Office of the Governor)

Georgia Film Day: Film and TV production brings in over $9 billion in 2018

At this year’s Georgia Film Day at the Capitol, held on March 19, Governor Brian Kemp spoke briefly about the continued boost to Georgia’s economy offered by the state’s thriving film and television production industry.

According to the Georgia Department of Economic Development, that boost equated to $9.5 billion in revenue, with over 450 productions shot in the state last year. This makes Georgia the number one filming location in the world for the second year in a row, according to Lee Thomas, the deputy commissioner of the Georgia Film, Music and Digital Entertainment Office.

Also part of the event — a screening of a short two-minute animated video by the Georgia Department of Economic Development and Floyd County Productions. Narrated by Georgia native and Atlanta actress Amber Nash (who began her career at Dad’s Garage), the video highlights the positive impact film and television production have had on the state and how it has grown in recent years — including job creation, workforce and studio development and growth within the tourism industry.

“Before 2008, I was bouncing from job to job, scrambling to find anything remotely steady,” says an animated Nash in the clip. “Name it, and I probably got laid off from it. But then 2008 happened, and boom, the floodgates opened. While the rest of the economy spiraled downward, I was getting job after job — on film sets of all things . . . it’s all thanks to smart government — which sounds like an oxymoron — but it’s true. A 30 percent tax credit for productions . . . has allowed the Georgia film industry to blossom. Blossom,” she says, “might be an understatement.”