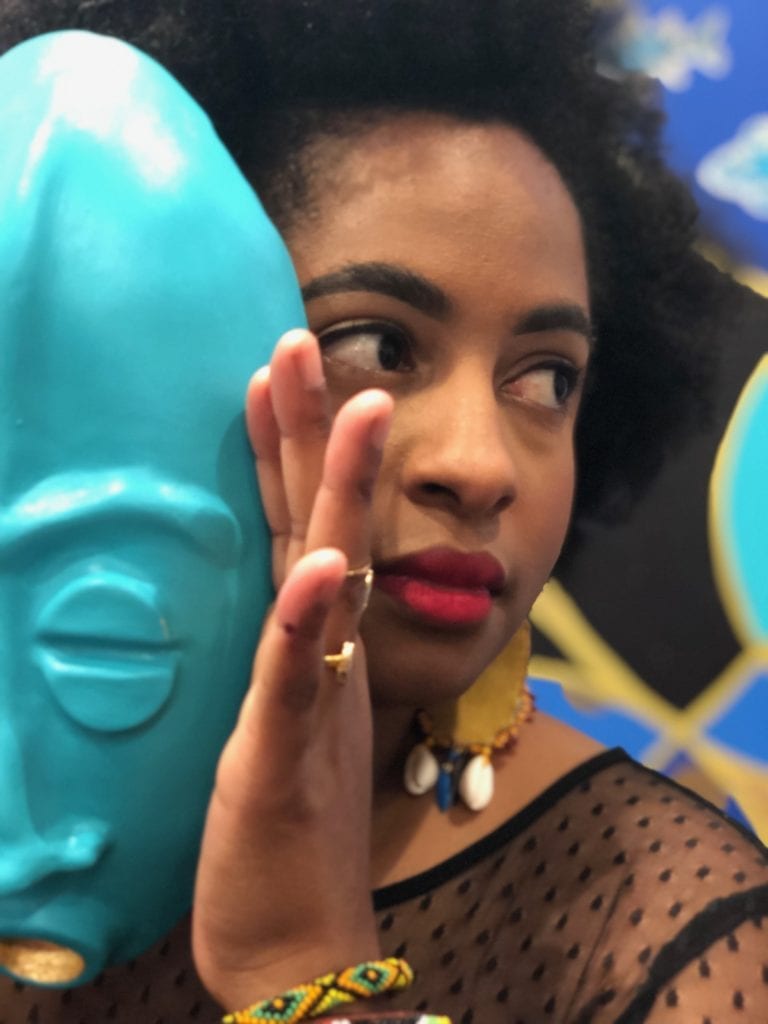 Painter Ré Phillips visited 30 countries before she turned 30 and believes that social justice, political activism and art can intersect and drive global change. See her work at Brickworks Gallery through April 15. (Photo by Marci Hernandez)

Ré Phillips is a multidisciplinary artist who says storytelling is at the root of her expression as a singer, writer, designer and painter. But when contemplating the origins of her narratives as a painter, she cites a metaphysical thin space where the distance between heaven and Earth collapses and she becomes a vessel for a higher consciousness.

“Inspiration flows easily from the divine,” says Phillips, whose paintings, along with Lori Haas’ personal altars, make up the two-woman show Changing Course at Brickworks Gallery through April 15. “Something drops out of the sky and into my soul . . . my spirit. I take no credit for anything.”

Her reluctance to take credit for the ideas that inform her canvases notwithstanding, Phillips is a superstar on paper.

She has a B.A. from Stanford University and a Master of Philosophy from the University of Oxford, St. Antony’s College. She’s worked in New Delhi as a Clinton fellow and did research in Guangzhou, China, as a Fulbright fellow. And she founded AYA Global Innovators, a creative consultancy that uses art and innovation to provide capacity building and leadership training for young women in Somalia, India and Lebanon. She’s fluent in Spanish and Mandarin, speaks conversational Hindi and Arabic and what she characterizes as “passable” French and Amharic.

Phillips met her goal of visiting 30 countries before turning 30, and diverse life experiences have honed her understanding of how social justice, political activism and art can intersect and drive global change. She took time to chat with ARTS ATL about finding kindredness on the road, her favorite places to reboot and why she honors three particular women in Changing Course.

ARTS ATL: What first sparked you interest in art?

Ré Phillips: I’m the eldest of four girls, and we were always exposed to art. The walls of our home in Conyers were covered with African masks, paintings and collectibles. There were annual trips to see The Nutcracker, weekly trips to museums and the library — where I would always pick out books on art. And I’ve been drawing since I was old enough to hold a crayon. The beauty of art is that it can highlight the unseen or the unknown. I think Picasso got it right when he said, “All children are artists. The problem is how to remain an artist once he grows up.”

ARTS ATL: You say a trip to Ethiopia in 2009 changed the trajectory of your life. How so?

Phillips: African Americans have a de-territorialized African identity [owing to the trans-Atlantic slave trade] because we can’t point to exactly where our ancestors came from on the continent. I have spent time in Uganda, Sierra Leone, South Africa and Kenya. But I felt extremely connected to Ethiopia, especially artistically, in a way I’d never felt anyplace before outside of my home. I saw biblical references in Coptic Orthodox churches — rendered in bright, living color made from plants, indigo, henna and lapis lazuli. The visuals were backed by a history, culture and politics that resonated with me and still make their way into my paintings today.

ARTS ATL: What was the organizing concept for Changing Course?

Phillips: Lori and I wanted to feature transformative, badass women who have given their opposition a run for their money. Three of my pieces take examples from three places and times to challenge mainstream narratives about the role of women in history: Cleopatra vs the Roman Invasion (ancient Egypt), Malala vs the Taliban (early 21st-century Pakistan) and Rosa Parks vs Jim Crowism (mid-20th-century Montgomery, Alabama).

ARTS ATL: What is it about Malala Yousafzai, apart from being the youngest Nobel Prize winner ever, that captivated your imagination?

Phillips: Malala was the most divinely inspired piece. I’ve never felt so emotional painting before . . . and had to keep taking breaks because her story [shot in the head by the Taliban for seeking a secular education] resonated with me deeply.

ARTS ATL: Tell us, please, about the collage of book jackets and annotated pages that cover the canvas.

Phillips: I reimagined Malala as my own daughter with all the things I would wish for her. I would want her world to be colored so brightly . . . just as people create nurseries for newborns as an act of love. So I used pre-used, pre-loved vintage book jackets and pages [torn from those books] that were near and dear to other people — as evidenced by notes in the margins, underlined passages and highlighted sections. The works by Shakespeare, Jane Austen, Malcolm X and Chimamanda Ngozi Adichie serve as a suggested reading list for Malala and give the canvas a more communal feeling — like we are all uplifting our daughter.

ARTS ATL: Where do you go when you need to be uplifted as an artist?

Phillips: Ethiopia. For me, it is a “thin space,” and I get inspired easily by day-to-day life, Orthodox Christian art and the National Museum. If my schedule won’t allow me to travel to Africa, there are places I go to locally to get inspired. Little Five Points, the High Museum of Art and Auburn Avenue are my favorites.

ARTS ATL: How does Atlanta rank as an incubator for emerging artists?

Phillips: There are so many great opportunities for artists in Atlanta. Performing and musical artists, of course, are in what I think is the contemporary music capital of America. For visual artists, there are so many cool galleries and organizations that offer opportunities for artists to showcase and grow. The public art scene is prominent, and it’s easy to cross over from canvas to a huge wall if you want to try your hand at street art. All that being said, Atlanta is a great place to experiment and grow as an artist of any discipline.