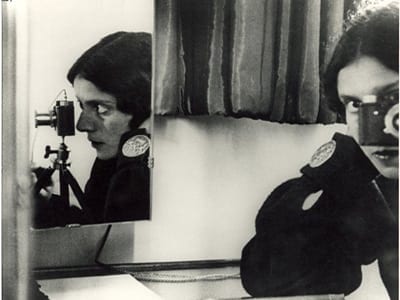 Liberated from storage purgatory: High Museum exhibits from its collection

Two new exhibits, “American Scenes: Art from the Depression Era in the High Museum Collection” and “Look Again: A Selection of Photographs from the Permanent Collection,” are on view in the lower level of the Wieland Pavilion through Jan. 10.

American art curator Stephanie Heydt, who foraged through flat files for her curatorial debut, says she wanted to showcase the museum’s strength in works on paper from the 1920s-1940s, many of which have not been out for a decade. The timeliness of the Depression-era theme was not lost on her, either.

The show includes photographs as well as prints and drawings. The vintage prints by Peter Sekaer, who traveled through the South with Walker Evans, are a preview to a monographic exhibition at the High in 2010.

Though reflective of a money-saving recessionary trend, focusing on the permanent collection isn’t a bad thing, for the museum or for us. Ron Labaco’s exhibit of new acquisitions in the decorative arts called attention to his commitment to contemporary design. The recent exhibition of African-American art spoke to its commitment there, and to the success of its Driskell Prize initiative.

“Alec Soth: Black Line of Woods” suggests another opportunity. The Soth project, which I will review this Friday on ArtscriticATL and in the AJC, is the sixth installment of “Picturing the South.” Over the past 13 years, the museum has commissioned Dawoud Bey, Emmett Gowin, Sally Mann, Richard Misrach and Alex Webb to undertake a study of some aspect of the South. Each pursued a different path, from portraits of young Atlantans and lush landscapes to the pollution of the Mississippi River in Louisiana.

Wouldn’t it be interesting to see them together?

I queried curator Julian Cox about that possibility recently. He says that a group show is in the planning stages for 2012. In the meantime, he has chosen Kael Alford for the next project. The photojournalist and SCAD professor will document communities in remote southwestern Louisiana threatened by coastal erosion.