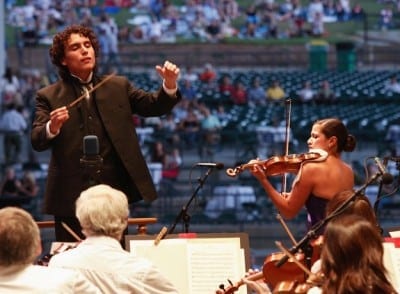 Are teenage conductors the future of classical music?

For its final concert of the summer season, the Atlanta Symphony turned over the steering wheel to a conductor who doesn’t yet have a driver’s license. At 16, Ilyich Rivas is not yet a finished artist, but he’s got a spark of personality in his conducting, and he can get a stage full of musicians to follow his every command. Saturday at Verizon Wireless Amphitheatre, reviewed in Monday’s AJC, he was making his U.S. professional conducting debut.

Why is 16 such a big deal? As I wrote in a preview last week:

“Outstanding young violinists or chess masters or tennis pros are common. Conducting prodigies are extremely rare because leading an orchestra is a cumulative art that’s rewarded by life experience. It’s about persuading 100 independent-minded virtuoso musicians to take direction and inspiration from the tip of a slender little baton. It requires equal parts compelling musicianship, verbal (and especially nonverbal) communications skills, personal charisma and a shrewd understanding of group psychology.”

Rivas’ program was well chosen to flatter his particular talents but standard from the orchestra’s perspective: a Verdi Overture, the Mendelssohn Violin Concerto with Elena Urioste as soloist, and Tchaikovsky’s Fourth Symphony. (Photos by Clark Savage.)

Should we brace ourselves for a deluge of pre-adult conductors, or as Donald Runnicles jokingly (and presciently?) put it when Rivas’ ASO debut was announced some months ago: “He’s 16? Sixteen! What’s next, they’ll be coming in diapers?”

Well, almost, especially since a handsome neophyte conductor might draw some media attention for the concert, sell some tickets and, not least, cost the orchestra a lot less than a mid-career routinier. Lower fee, decent box office — what’s not to love?

It’s no exaggeration to say that interpretations have become standardized and homogenized in the traditional orchestral repertoire. After a century of recordings, among other reasons, our ears have become attuned to polish over individuality and efficiency over creativity — and audiences have transferred those expectations to the concert hall. Nowadays, it’s rare in live performances to hear improvisation, spontaneity and the exhilaration that comes from artistic risks. In a related development, the virtuosity and preparation of musicians in professional orchestras continues to rise.

Thus the importance of conductors is fading. A fine orchestra like the Atlanta Symphony, for example, infrequently books guest conductors who can really teach the musicians, in addition to making them play together. And yet the ASO continues to grow as an ensemble. Clearly, the maestro species isn’t the keystone it used to be. (In fund-raising and extra-musical leadership — putting a public face on an organization — the conductor remains essential.)

So with the success of legitimate talents like Ilyich Rivas, I predict that conservatories everywhere will find the confidence to admit younger and younger students into their conducting programs. They will teach these bright, self-motivated musicians basic stick technique, get them to master a stock repertoire of gestures and talking points for a stock repertoire of concertos and symphonies, and push them onto the concert stage.

And the relationship with orchestras will flip: a young Rivas is the student; the orchestral musicians are the teachers. When conducting is no longer a cumulative art rewarded by life experience, will listeners know the difference? Will it matter?