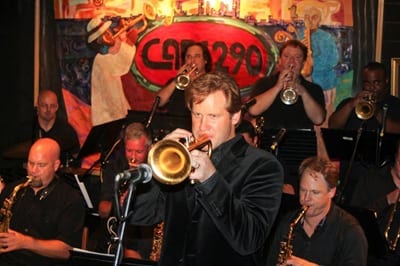 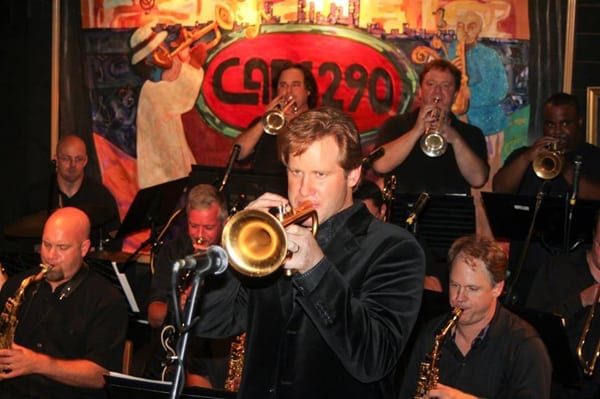 Aside from the most obvious venue — Churchill Grounds, next to the Fox Theatre in Midtown — jazz in Atlanta can be hard to find. On Monday nights at Café 290, trumpeter and vocalist Joe Gransden’s 16-piece big band functions as a sort of search engine, bringing the best local players together in one place.

For the past six months, the wide, low-ceilinged club in Sandy Springs has hosted the band on the first and third Mondays of the month. What started as a low-key gathering quickly spawned into a regular event that has become surprisingly popular. In the process, the regular gig has created exposure for some of the group’s lesser-known musicians. I’ve been to only two shows at Café 290, but from what I hear, most are standing room only.

The Monday crowd at Café 290 loved Gransden — I heard screams of “we love you” — and his sophisticated big-band arrangements. Musicians such as Kevin Lyons, a ringer for the Atlanta Symphony Orchestra, and Georgia State University professor Gordon Vernick played trumpets; the omnipresent drummer Justin Varnes and bassist Neil Starkey held it down in the rhythm section. The musicians’ familiarity with one another lent a measure of camaraderie to the evening. It’s an ease that translates to the listeners, who can tell the guys in the group are having fun.

Gransden infuses his sets with standards: as a mostly a wine-and-dine group, the listeners’ idea of jazz blurs with nostalgia for Frank Sinatra and Dean Martin. Couples on dates and younger jazz fans, seemingly drawn by the group’s improvisational prowess, also frequent the club.

On Monday, Gransden started the evening with a few vocal pieces that showed his penchant for mid-tempo crooners. Gransden is a natural showman, and as he sang he made eyes at ladies in the crowd and addressed the audience in a chummy manner. “They sound good tonight, don’t they?,” he asked about the band, at the end of a verse.

Arranger Wes Funderburk, one of the band’s trombonists, highlighted the well-blended saxophone section led by alto saxophonist Mace Hibbard with numerous soli performances. Though each player by himself weaved exciting, well-constructed improvisations, as an ensemble, no one player stood out of the crowd, making for a perfect accompaniment to the vocalist.

The group’s show piece, “Carnival of Venice,” pitted Lyons’ classical trumpet style against Gransden’s bebop chops. After a light trombone introduction, the band created a boom-chick-chick accompaniment for the classical melody, switching to a swing beat for Gransden’s breaks. The piece moved between the two styles, finally settling into a swing accompaniment for a lengthy solo section.

The band always features a few guests. On Monday, Nashville’s Annie Sellick brought her infectious energy to the club. All smiles beneath her waist-length dreadlocks, Sellick has a light, supple voice that easily handles wide melodic leaps. While she sang “A Foggy Day (in London Town)” and “Mambo Italiano,” Sellick swayed to the band’s accompaniment, dancing around the stage while soloists interpreted the music. Her voice sometimes was overpowered by the band, a function of such a large group in a tiny space, but these moments were rare. In all, Gransden’s big band is one of the best jazz nights out in Atlanta. One word of warning, however: watch where you sit, it can get loud.