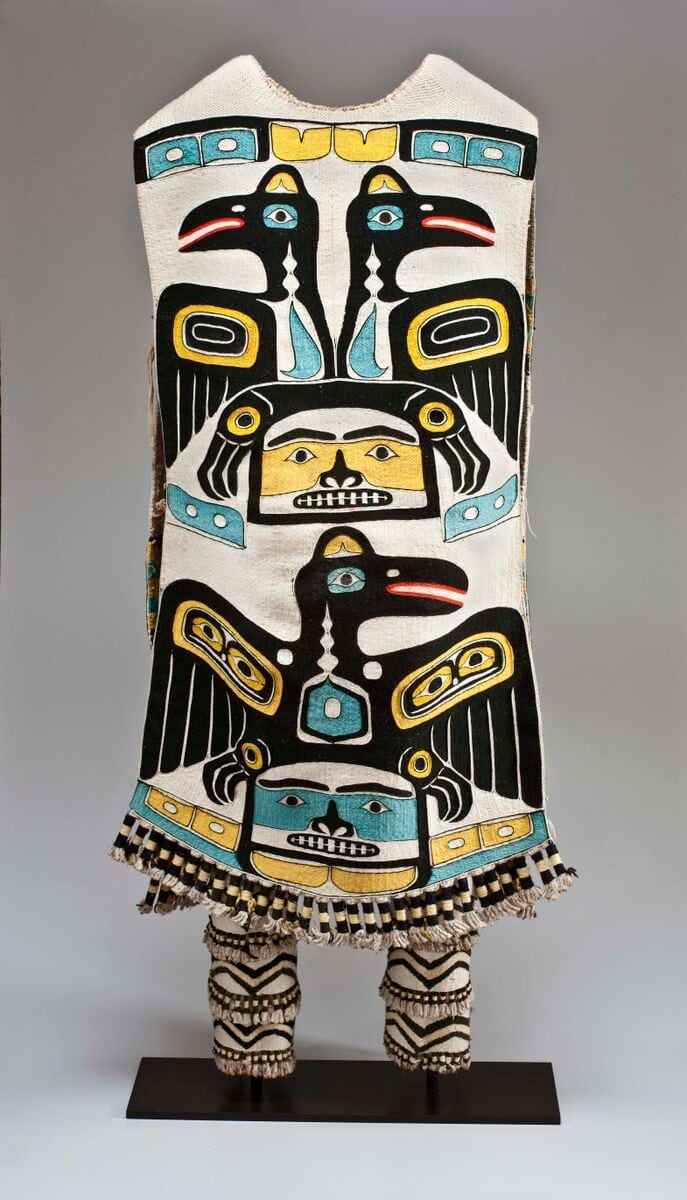 Review: “Indigenous Beauty” a breathtaking array of Native American arts, at the Carlos

Its 118 objects, representing First Nations peoples across the North American continent, are linked by the extraordinary connoisseurship of collectors Charles and Valerie Diker, whose superb collection of Native American art is one of the largest and most comprehensive currently in private hands.

First, some facts: The works span the ancient to the contemporary, including ivories from the Bering Strait region, decorative clothing from Eastern and Plains First Nations peoples, Southwest pottery, Western baskets, pictographic arts, sculpture carved from wood and bone, weaving, masks and glasswork. It is organized in 10 clusters based primarily on geographic and cultural factors. Not intended to be definitive, the groupings suggest art historical themes, and the objects demonstrate shared formal and functional qualities. They also facilitate historic and cultural consideration and an understanding of the importance of geography in the development of regional traditions.

Although the exhibition emphasizes interrelated themes of diversity, beauty and purpose, it is the enduring power of beauty that touches us. A visit is an experience of wonder and awe: each is a work of art, a world unto itself.

Shamanistic objects such as the sublime 18th-century Tsimshian rattle from British Columbia, and the salmon rattle and figure from the Tlingit peoples of Alaska, are not only exquisitely crafted but also coiled with spirit, animated by a power invested in them by purpose and the intent of artist. A finely carved Tlingit mask, ca. 1850, stares across time, trance-like, possessed of a pensive, inward-looking spirit, withdrawn for now — but only for now.

According to the exhibition’s guest curator, David W. Penney, the Dikers are drawn particularly to the aesthetic qualities of the objects they collect. Much of the work looks strikingly modern. In fact, the Dikers began as collectors of modern art, and they display Native American works alongside such as Picasso, Jean Arp, Mark Rothko, Jean Dubuffet and Ellsworth Kelly in their New York home.

This installation was inspired by their experience of the Museum of Modern Art’s 1984-5 exhibition “Primitivism” in 20th Century Art: Affinity of the Tribal and the Modern, which examined early 20th-century modernists’ aesthetic engagement with ethnographic objects. The Yup’ik, for example, are known as creative mask makers and were prized by ethnographers and Surrealists alike. One powerful Yup’ik spirit mask (1916-18) on display here draws together sea, air, land and spirit in a willow loop.

The MOMA show was controversial, but the conversation begun by its juxtapositions is one that the Dikers have continued.

Ceremonial regalia is tradition for many Native people. Detailed Kiowa and Comanche drawings, as vibrant today as when they were drawn on ledger pages torn from books in the late 1800s, depict battle scenes, regalia and ritual. But nowhere is the desire for this beauty more evident than in the decorative beadwork of the Great Plains Indians.

Traditional 19th-century Plains regalia relied heavily upon glass beads traded from Venice, Italy or Belgium, and intricate designs in beads of turquoise, sky blue, red, green or ochre were sewn onto everything from shirts and dresses, to moccasins, bags and baby carriers.

Most here date from the mid- to late-1800s, but one shining contemporary example of beadwork links past to present. Rhonda Holy Bear, a Cheyenne River Lakota and one of the most important Plains artists working today, has honored traditional values of motherhood and creativity in Maternal Journey (2010), a multimedia sculpture of wood, buckskin, feathers and beads in a lifelike marvel of miniaturization in which a Plains woman moves her regalia-clad family in a procession.

A delicate pair of moccasins sewn with glass beads and cranberry silk ribbon is identified as Cherokee and dated 1850, but since this was a dozen years after the Cherokee were forcibly moved from their North Carolina and Georgia homeland, they are designated as Oklahoman. These dainty shoes are beautiful, still, and a poignant reminder of exile and displacement.

Although most of the objects in the show were designed for a purpose — for the shamanistic, for clothing, for storage or conveyance, for hunting or ritual — their consummate artistry and iconography transcends utility. They are compelling evidence that beauty, indigenous or otherwise, matters.