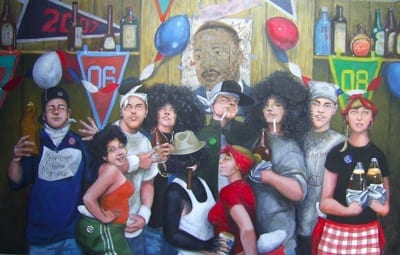 At Hammonds House, incendiary art to make you squirm

Currently part of “Incendiary Exposure” at Hammonds House Museum, Daryl Harris’ “The Greatest Fear” (2009) may read like a one-liner about the sources of white racism, but Harris practices equal-opportunity satire. His paintings make pointed comments about the ills of both the white and black communities, and it is unlikely that anybody can see this whole show without squirming at some point.

Michael Morgan’s box assemblages commenting on the boxed-in condition of African-American homosexuals are equally incisive. They may use toy action figures, but there’s nothing playful about them.

Curator Kevin Sipp has brought these two together in hopes of starting a dialogue about issues that most Atlantans would prefer not to address too directly. Despite Harris’ sense of humor, this show was not meant to be entertainment.

On view through June 27.