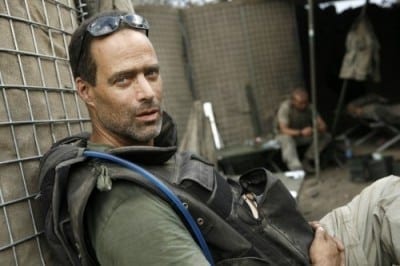 Junger, touted as the new Hemingway for his first book, “The Perfect Storm,” about fishermen lost at sea, spent 15 months in 2007 and 2008 embedded with a U.S. Army platoon in Afghanistan’s Korengal Valley, the site of much of the fighting in that country. (Author photo by Tim Hetherington)

The Korengal, dubbed “the Valley of Death” by American troops, who fiercely battled the Taliban there until the Army pulled out of the valley in April, is the locus of “War,” which examines the emotional and psychological experience of combat for young soldiers. Fighting can be as intoxicating as a drug high, Junger finds, but what motivates the men in the most dire circumstances is not hatred or politics, but something much purer.

Junger’s film on his time in Korengal, “Restrepo,” made in collaboration with photographer Tim Hetherington, recently won the 2010 Grand Jury Prize for documentary at the Sundance Film Festival and will be released next month.