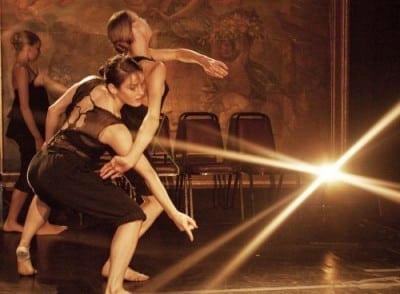 New York — The walls seemed to shudder during the world premiere of Lauri Stallings’ “Halō” in the Duo Multicultural Art Center’s jewel-box theater in the East Village here last Thursday. While her dance company, gloATL, performed her latest site-specific work, bits of plaster trickled down behind an antique panel, as if the building’s interior was shedding a layer of skin, breathing more easily.

Unlike the large, crowded public venues where gloATL has performed in Atlanta, the DMAC offered a rare close-up view of six gloATL dancers. Proximity allowed dancers to meet audience eye to eye and to engage in the personal exchanges that Stallings pursues in her site-specific works. In the past, inviting an audience into a work has had its risks. It’s easy to see how passers-by in public venues could slip into voyeuristic attitudes, crushing trust between audience and performer. It’s easy to see how that delicate respect for the artists could be violated further through physical contact.

In “Halō,” Stallings confronted feelings of being exposed, reinforced the need for protection and re-established a sense of trust between artists and audience. GloATL student artist Nicole Jones stood under the ornately carved ceiling, amid the walls decked with classically styled murals, as a small metal lamp hanging from its cord (Ryan O’Gara’s design) cast golden light on her head and bare shoulders. To the famous “Adagio” for organ and strings by Albinoni, little impulses seemed to travel through her torso, as if an energized marble scanned the body’s interior. Her meandering focus, squaring on one person after another, seemed both internally aware and outwardly curious.

In the next section, five women clad in black danced in unison to an electronic beat, pelvis-driven, alternately exposing the body and crossing arms in front in what appeared to be an explosive release of sexual tension. At one point, they thrust elbows upward, angular and seemingly dissonant, like a silent cry. Occasionally a dancer approached an audience member from floor level, reaching into a knee crease, crossing the threshold between audience and performer.

To emotionally penetrating strains of Arvo Pärt’s “Tabula Rasa,” the dancers lined the perimeter in poses like store mannequins or bas-relief figures. With knees bent, backs arched and elbows tightly bent above the head, two dancers side by side bounced lightly as if trying to settle into an uncomfortable pose that was equally unsettling to watch.

The seductive aspect of dance turned absurd in a section set to “Habanera” from Bizet’s “Carmen.” Torsos thrust and limbs flung in all directions as the cluster of women struck oddly contorted poses. At moments they froze, shaking an isolated body part — a foot or hand — to a comical effect that seemed to turn voyeurism on its ear. In sweet contrast, Jones and Nicole Johnson walked slowly forward, facing the edge of the stage. Walking behind Jones, Johnson held her hand and hovered behind the young dancer under golden light. Johnson seemed to consecrate and protect the body even as she displayed the child-woman to the audience. In a larger sense, it felt as if the dancing body was made sacred again.

A sensuous joy followed as Sarah Hillmer and Virginia Coleman assumed a stylized ballroom stance and took flight to a Verdi waltz that led to a playful section where dancers, as spellbinding, marionette-like creatures, led audience members across the floor, into a waltz that morphed into a Latin dance. As the work reached its revolving end, “Tabula Rasa” played, and curved movement seemed to ripple out of the ground with a newfound strength and power — polyrhythmic, in circular harmony.

Rather than compete with the growing crowd that follows Stallings’ performances in her home base of Atlanta, it was refreshing to see her emotionally honest, inventive choreography up close, at eye level with six of the most physically gutsy, emotionally daring, technically spot-on dancers I’ve seen. DMAC hopes to produce the work again in November. By inviting the audience in, “Halō” may have jarred some viewers out of their comfort zones. But others, “tired of the same old song,” are ready for choreography that’s risky, genuine and fresh.